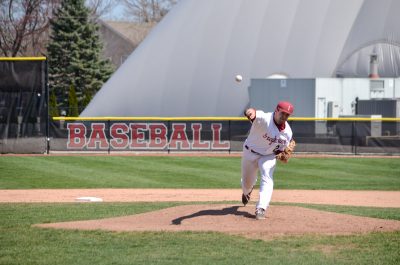 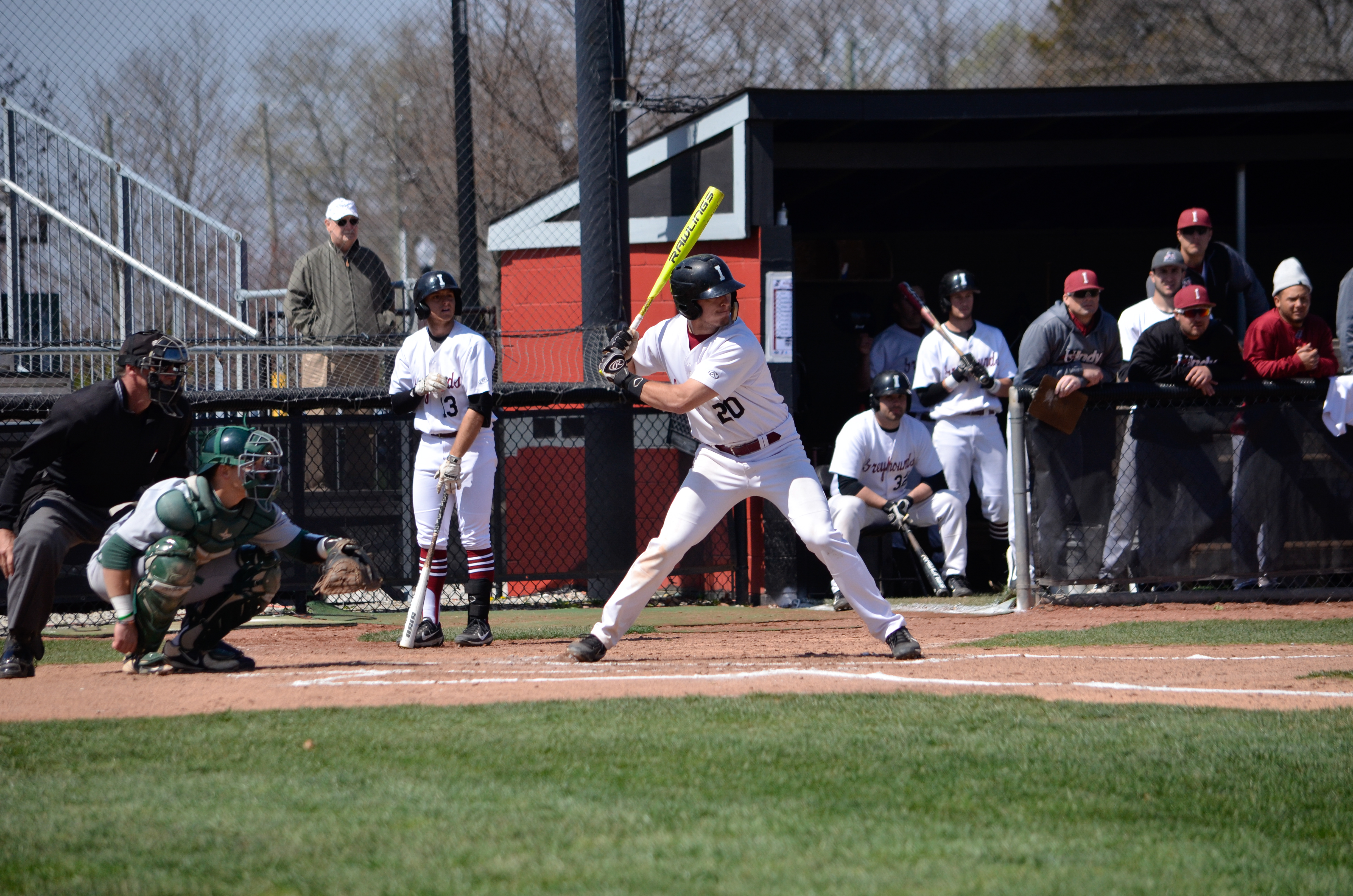 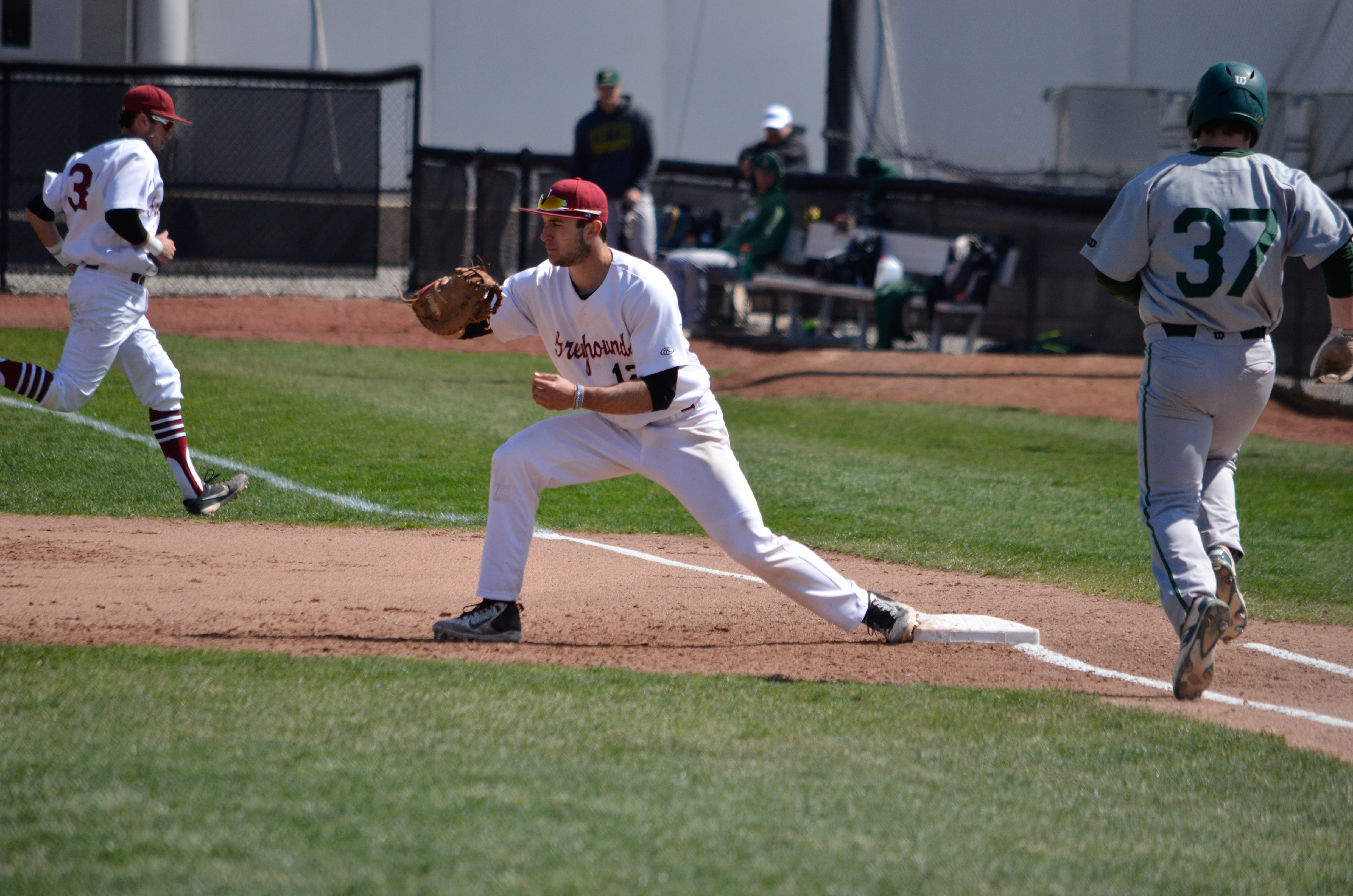 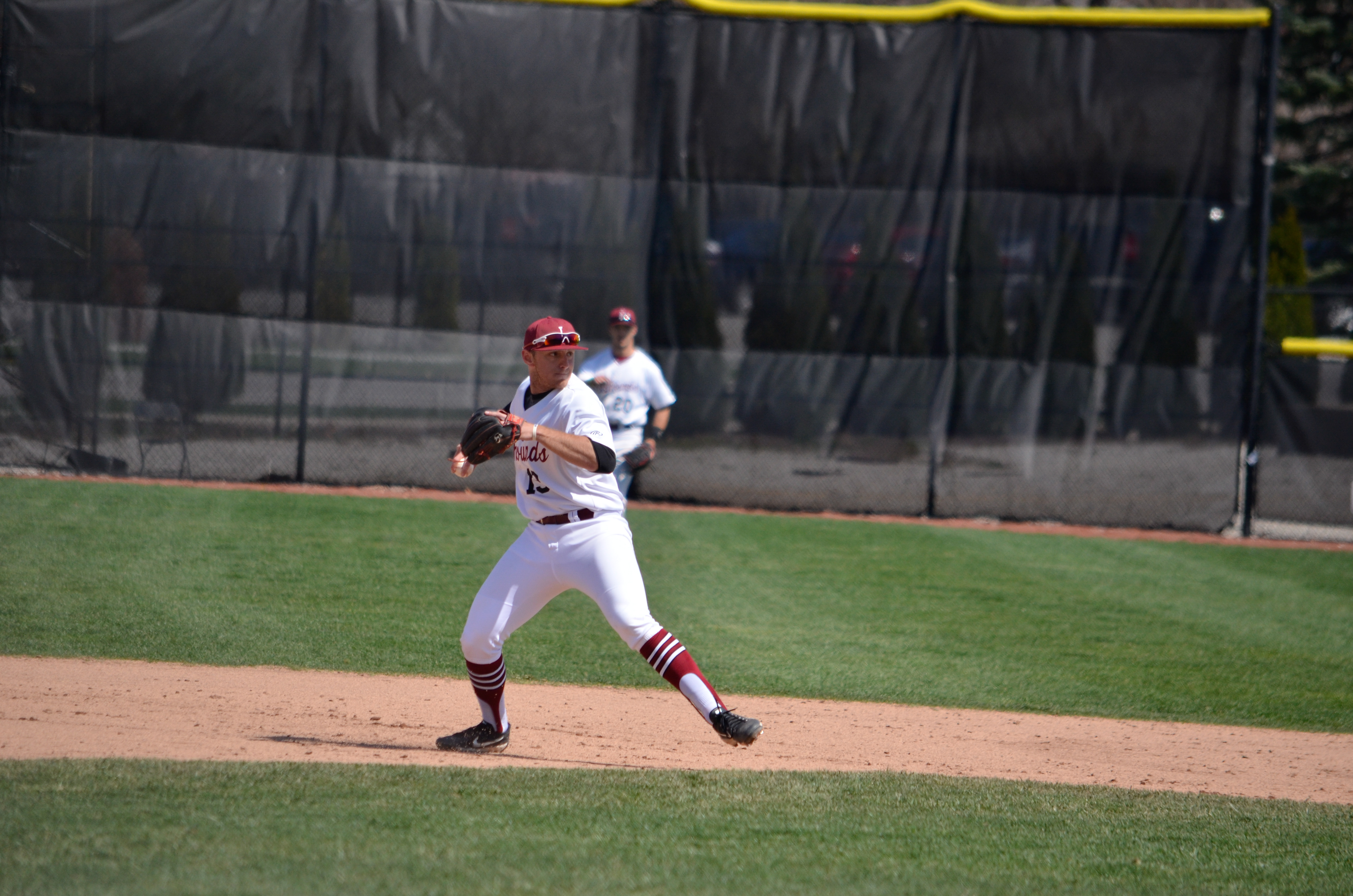 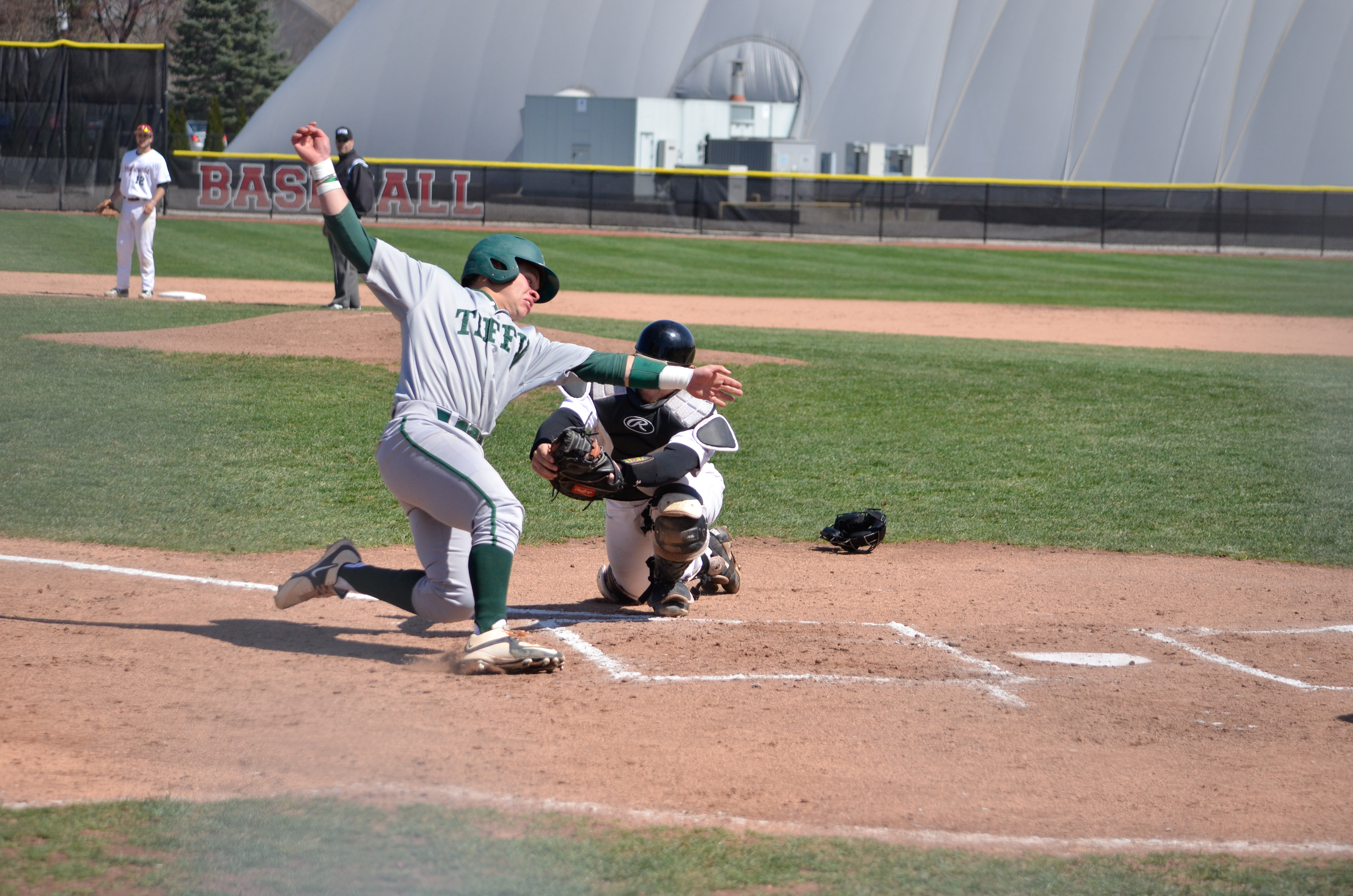 Eight conference games down, 30 total games in the book and 22 regular season games remaining. The University of Indianapolis baseball team is checking in with a 3-3 conference record, and a 18-9 season record, prior to competing against the University of Missouri St. Louis on Tuesday, April 3.

According to Associate Head Baseball Coach Al Ready, the Hounds divide the season up into three parts—preseason, which is the nonconference games, conference games and postseason.

“We were happy with the way the first season ended up record wise,” Ready said. “We don’t think we’ve really played that great, just yet. We haven’t really put all three facets together, pitching, defense, and offense-together consistently. We’re hoping to see a little bit more of that in conference play.”

For conference play, the Great Lakes Valley Conference has its baseball teams play a four-game series in its respective division, and Ready said that the Hounds’ goal is always to walk away winning the weekend.

“You’re always looking to win the series,” Ready said. “The road games are tougher to win, no matter who you play.”

Prior to traveling to Lewis University for a GLVC matchup, the Greyhounds were aiming for a winning series.

“I think 3-1 is our goal this weekend,” Ready said. “It’s where we need to be. I think our guys understand how important the series is, and we’ll be ready to go.”

The Greyhounds achieved Ready’s goal, going 3-1 on April 1 and April 2 in two doubleheaders against the Lewis University Flyers.

The team opened up the weekend with a 4-2 victory.  Junior third baseman Storm Joop earned the first run off a double from sophomore shortstop Macy Holdsworth. Lewis quickly answered with two runs of their own, taking the lead. The Hounds did not allow another run from the Flyers but added three runs of their own to take the win 4-2.

In game two, Lewis started the scoring with two runs in the second inning, taking the lead that they maintained for the rest of the game. They added two more insurance runs, which paid off when UIndy scored three runs. The runs were not enough, giving Lewis their only win of the weekend 4-3. Freshman pitcher Josh Helton surpassed some of his older teammates, earning four strikeouts in just three innings.

The Hounds avenged that loss on Sunday, when they stepped out quickly in the first game scoring four runs in the first inning. They tacked on another three runs to the Flyers two, before taking the win  7-2.

The Hounds earned their last win in an 8-6 victory. UIndy racked up a quick six runs, before settling down for a few innings, and allowing Lewis to get four runs. The competition came back in the remaining innings of the game, when Lewis tried to catch up to UIndy trailing closely behind. They did not surpass the Hounds, moving the Hounds record to 20-9.

The Greyhounds took on nonconference opponent Tiffin University on March 29 and split the doubleheader 7-5 and 0-5. Although Tiffin is not a conference team, they are a regional opponent and will play a part in the Hounds’ NCAA tournament chances.

“You never want to overlook your nonconference opponents,” Ready said. “The NCAA criteria to make it to the postseason does not distinguish between whether it’s a conference game or a nonconference game. They’re region games, that is how we look at it, both conference and nonconference. They’re just as important as this weekend [against Lewis.] We’re not overlooking Tiffin at all.”

In the face-off between Tiffin and UIndy, the Hounds took the first game 7-5 with junior pitcher Pete Allen getting the win, and redshirt junior pitcher Chris Boettcher coming in for relief. Combined, the two had five strikeouts and allowed 11 hits. The time on the mound during game two was split between five Hounds, with senior pitcher Connor Mailloux and freshman pitcher/outfield Bailey Buescher spending the most time.

On the offense in the first game, freshman catcher Will Smithey hit his first home run as a Greyhound. Smithey had two hits through both games, along with transfer junior outfielder Conor White. The Dragons out hit the Greyhounds 23-8 throughout two games.

For the Greyhounds’ first GLVC matchup of the season the team traveled to Rensselaer, Ind., to take on Saint Joseph’s College for possibly the last time in history. The two teams split 2-2 on March 24-25. The Hounds won games one and three, 15-11 and 6-1, respectively, while the Pumas won 9-4 in game two and 18-8 in game four.

“Through your leadership, your players have learned and displayed the characteristics of what college baseball is truly about. We would like to thank you for everything you have done for the GLVC and the respected rivalry that we have developed.”

Looking forward, the Hounds will take on conference opponent the University of Wisconsin Parkside. The first game against the Rangers is set for Saturday, April 15, at noon, with a game to follow. The same pattern will ensue on Sunday, April 16. Ready hopes to see the sun shine for the team and the fans for the remainder of the season.

“Well, hopefully they can see some warmer weather, to start with,” he said. “But I think the rest of the season, you know, if it goes as scripted, we’ll be playing our best baseball as it leads up to the postseason. And of course, that happened last year. We won the conference tournament, and moving into the regional, that’s right where we were. That’s where we hope to be this year, playing for a conference championship, and also playing for a national title.”