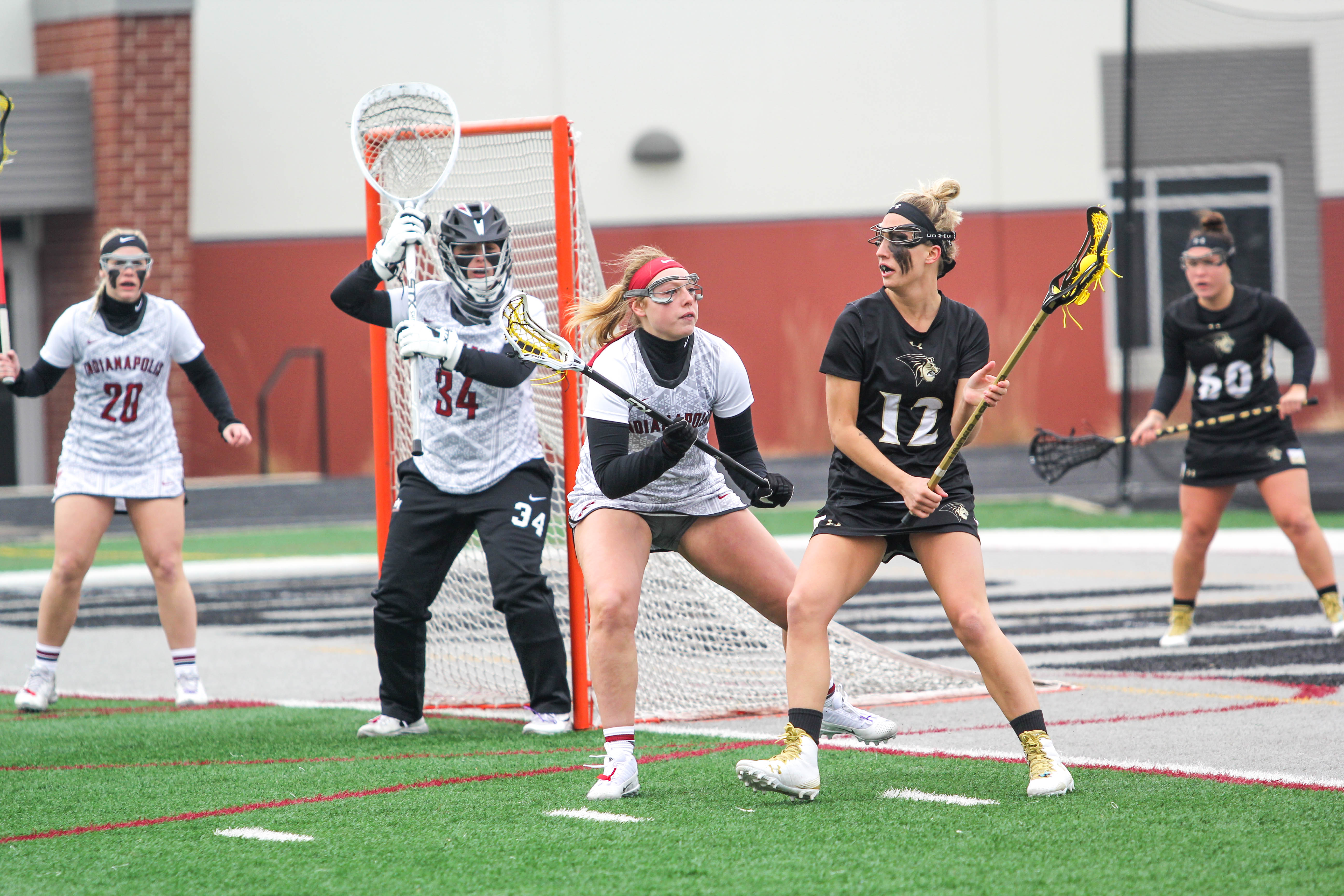 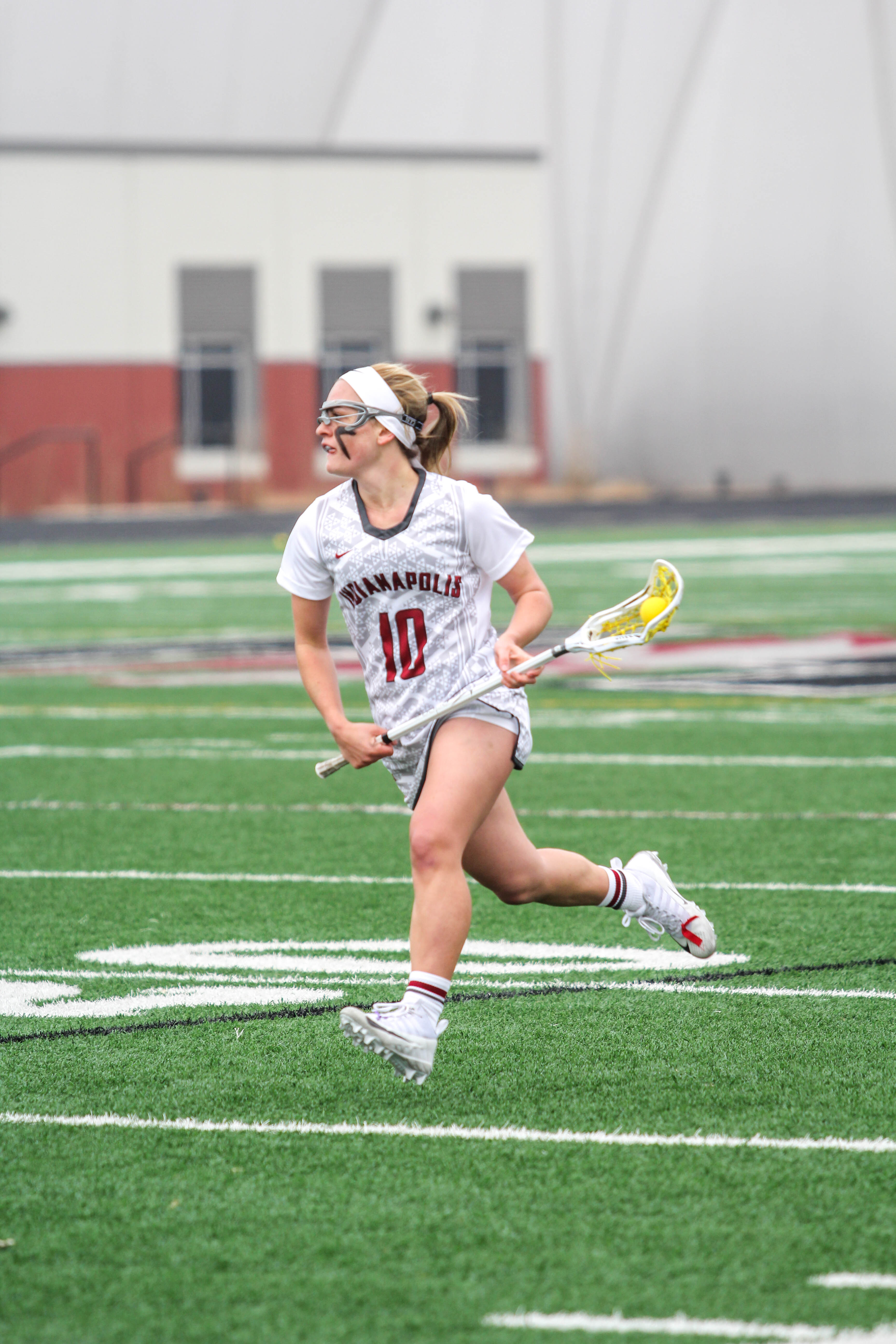 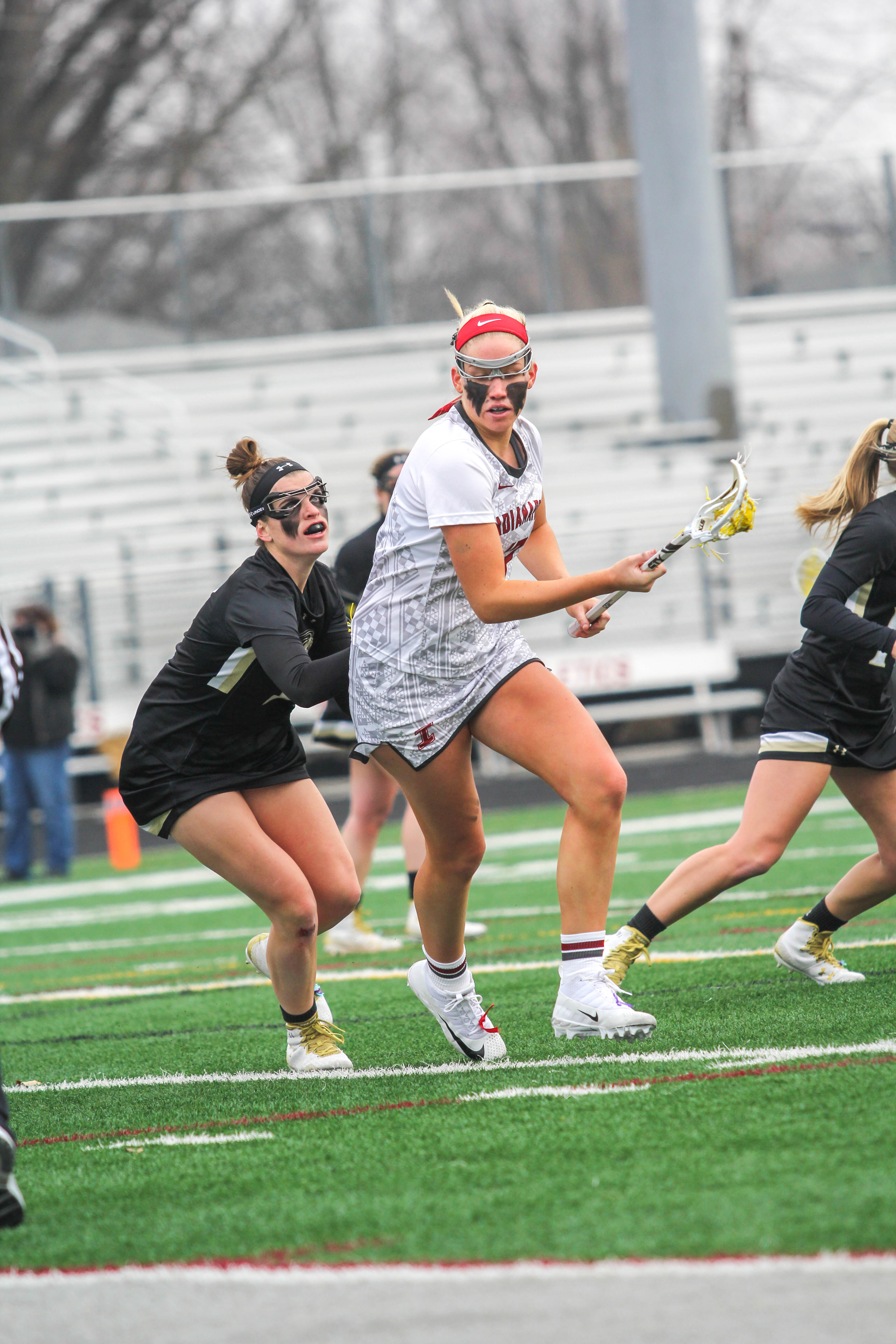 After being chosen as the third seed in the GLIAC preseason coaches poll, the University of Indianapolis women’s lacrosse team split its first two games of the season, with a win to the Rockhurst University Hawks on Feb. 17. and a loss to the Lindenwood University Lions on Feb. 10.

In their first win against Rockhurt, the women started off on top, scoring seven goals in under 20 minutes, before allowing a single goal from the Hawks with eight minutes left in the first half. Both teams scored twice more by the end of the half, going into the break 9-3.

The Hounds mocked their first half performance by starting of the scoring again in the second, scoring another seven goals before allowing the Hawks a chance at the net. Despite another two goals from the Hawks, the Hounds did not let up and defeated Rockhurst 20-6.

Despite women losing to the Lindenwood University Lions on Feb. 10,  Head Women’s Lacrosse Coach James Delaney said that the team gave it their all on the field and that the future of the season is still bright for the women.

“I think we have a great opportunity ahead of us this season,” Delaney said. “If we play our best lacrosse we can run with any team in the country and hopefully grow from this experience and show a little more composure down the stretch.”

Within the first three minutes of the game, sophomore attack Grace Gunneson struck the first point of the game,  followed minutes later by freshman midfielder Gina Jablonski. Lindenwood fought back and ended the half with a score of 6-5.

In the second half, the Lions only allowed the Hounds to score one goal to their six, ending the game with a score of 11-7.

The Lions caused 12 turnovers and won 20 ground balls over the Hounds. UIndy averaged 14 out of 26 shots while the Lions average a 23 out of 30.

Delaney said that despite the large number of underclassmen heading into their first game of the season, the team did not play like freshman and carried themselves well on the field.

“We executed our game play pretty well and I’m proud the way we went into the game expecting to win,” Delaney said. “We have a philosophy as coaches we focus on ourselves everyday getting better as at offense and defense. Getting better everyday so that ultimately we can put ourselves in a position that we have the expectation to win.”

According to Gunneson, the mistakes made in the first game were little and could be easily fixed for the next games. She said she has confidence in her team being able to come back from a loss, and that there is always room for improvement.

“As a team we can learn from our mistakes and try not to make them again in other games,” Gunneson said.

Now that the team is in season they work out six times a week with yoga on Saturdays, according to Delaney. He said he is grateful for the strength training staff for keeping the team in shape mentally and physically.

“[Assistant Strength and Conditioning] Coach Matt [Wagner] really has our girls ready to play from the first day. I think we physically outmatched the number three team in the country,”  Delaney said. “We talk a lot and don’t need to play perfectly. We need to play our best game. There are a few plays throughout that everyone looks back on and feels that it could have went differently.”

Delaney said that the experiences are only going to help the team and the program grow throughout this year. He that he is confident that the girls will make the right plays and learn from moments where they do not always win.

“You don’t become a top team overnight. It takes growth and experiences and there is a lot of positives to take out of the loss of Saturday,” Delaney said. “I think those kids [Lindenwood] showed the girls what real high level lacrosse is but I think our players handled their pressure very well.”

Next, the Hounds will travel to Charleston, W.Va. on Feb. 24 to battle the University of Charleston Golden Eagles.

Opera theater performs ‘The Light in the Piazza’