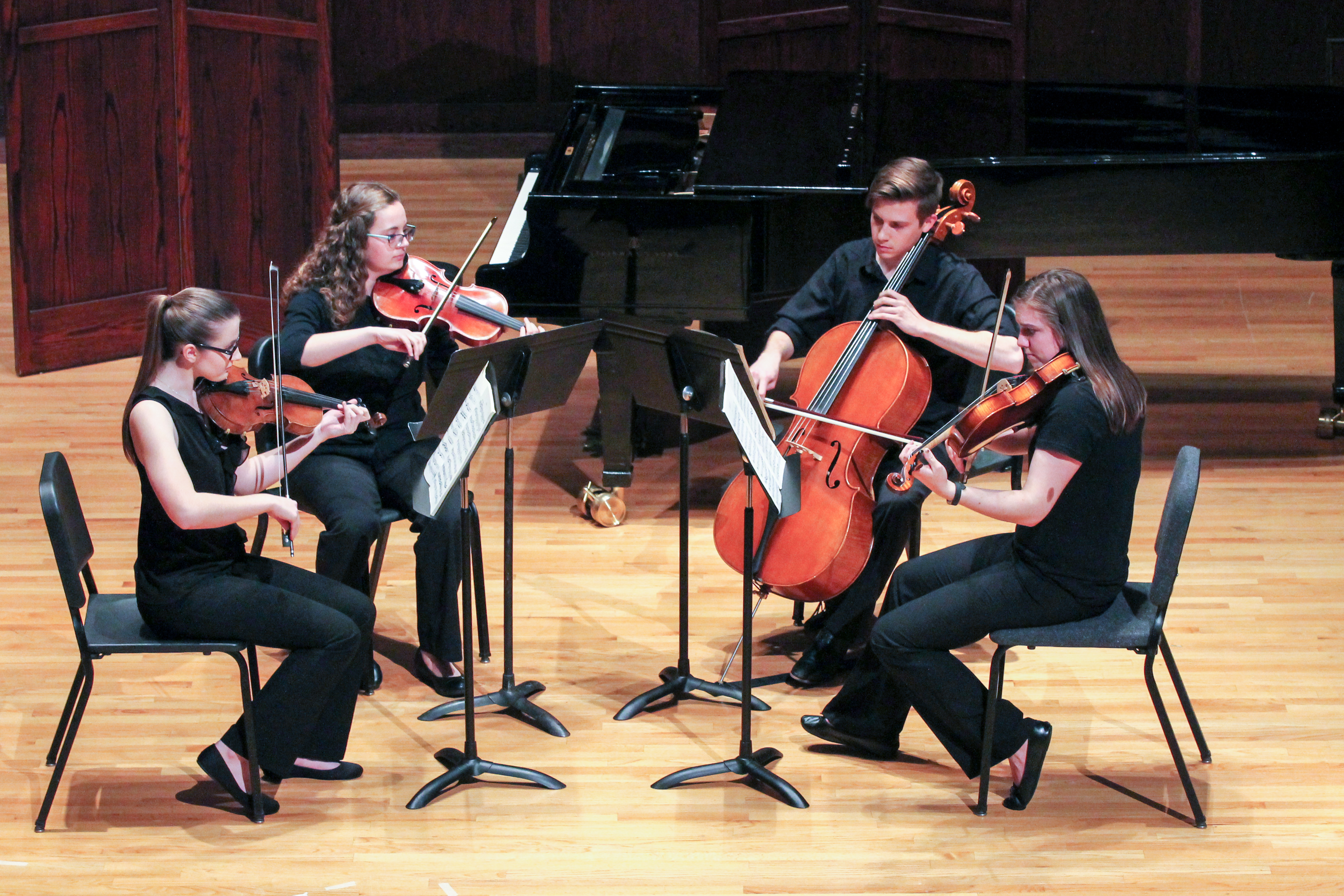 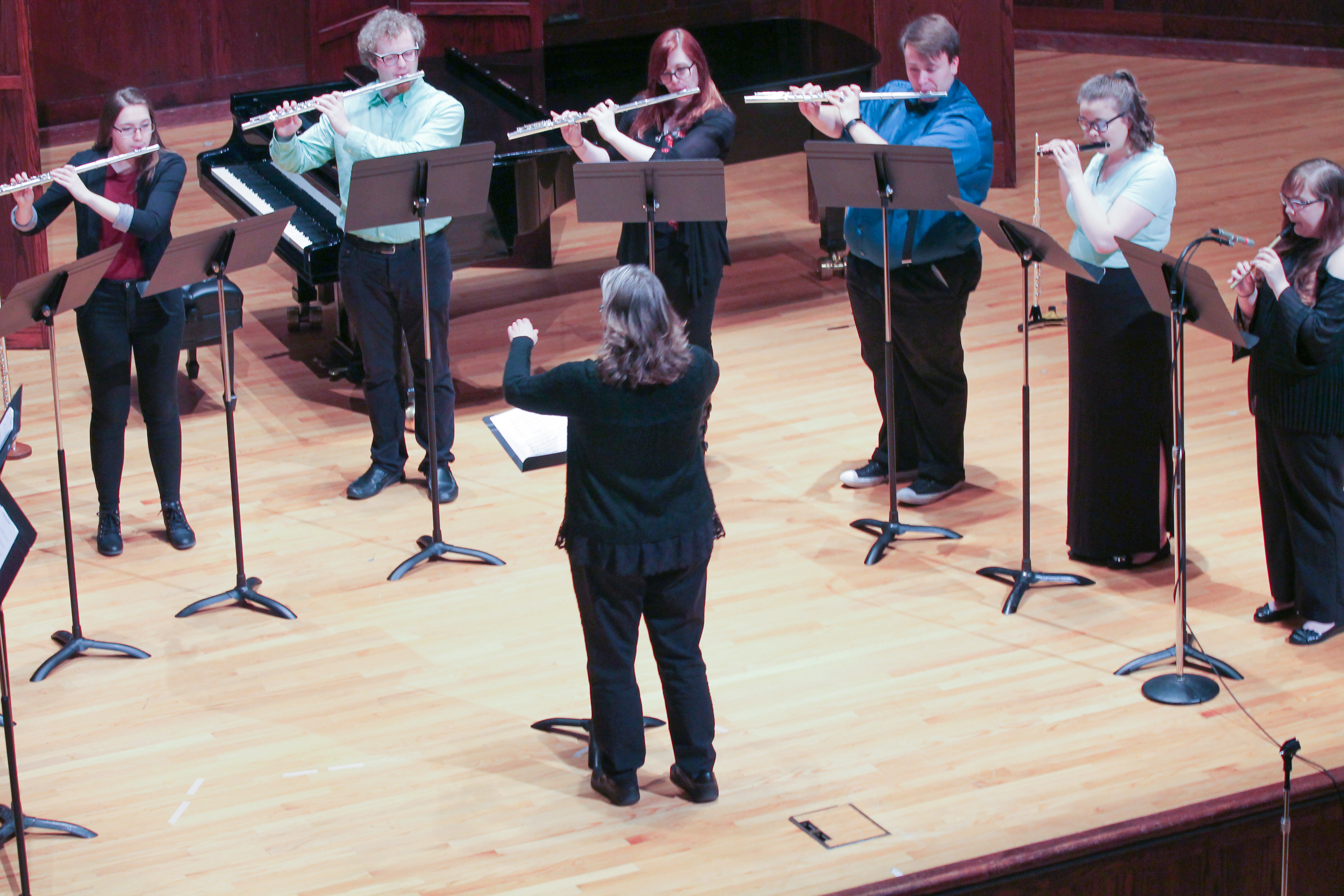 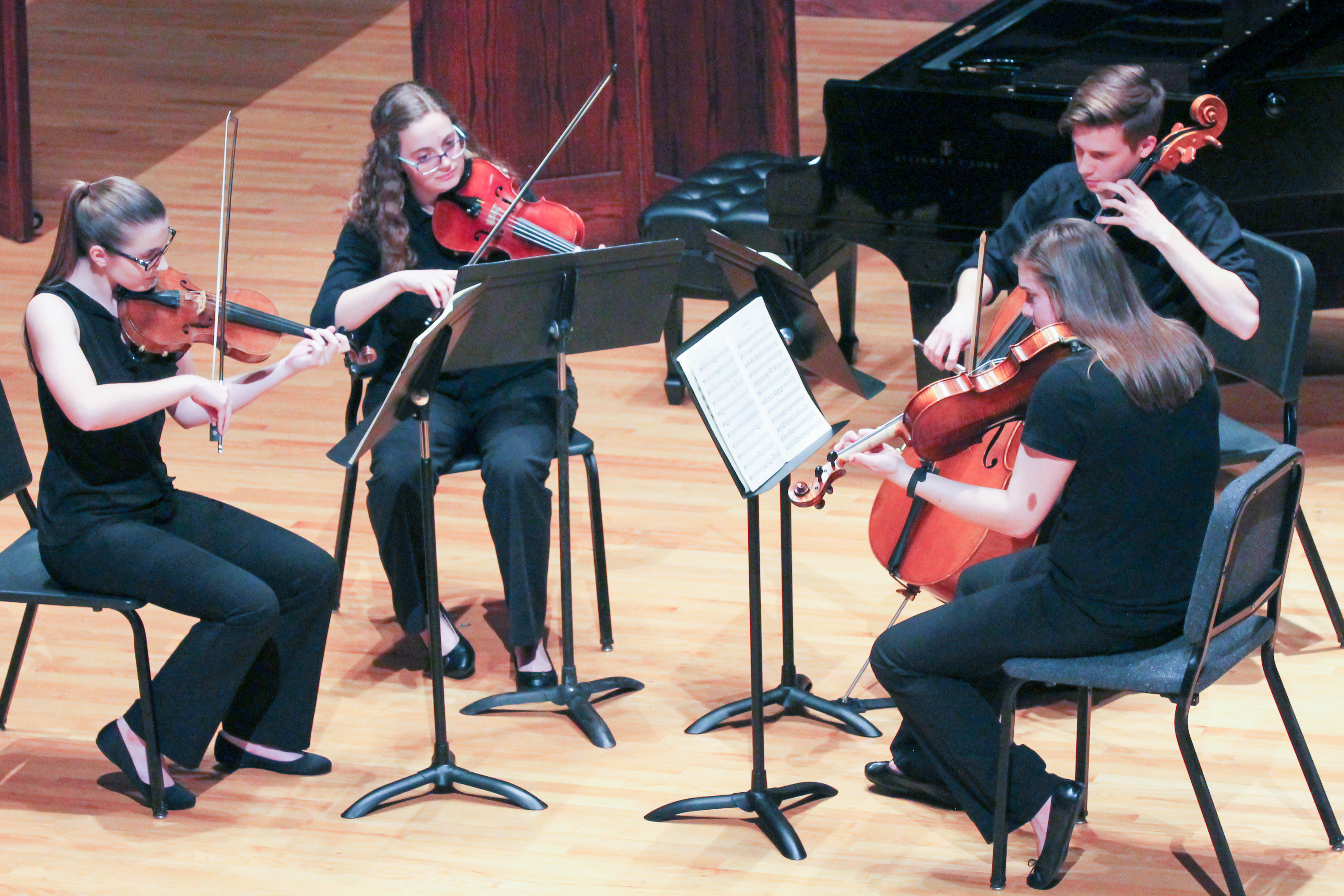 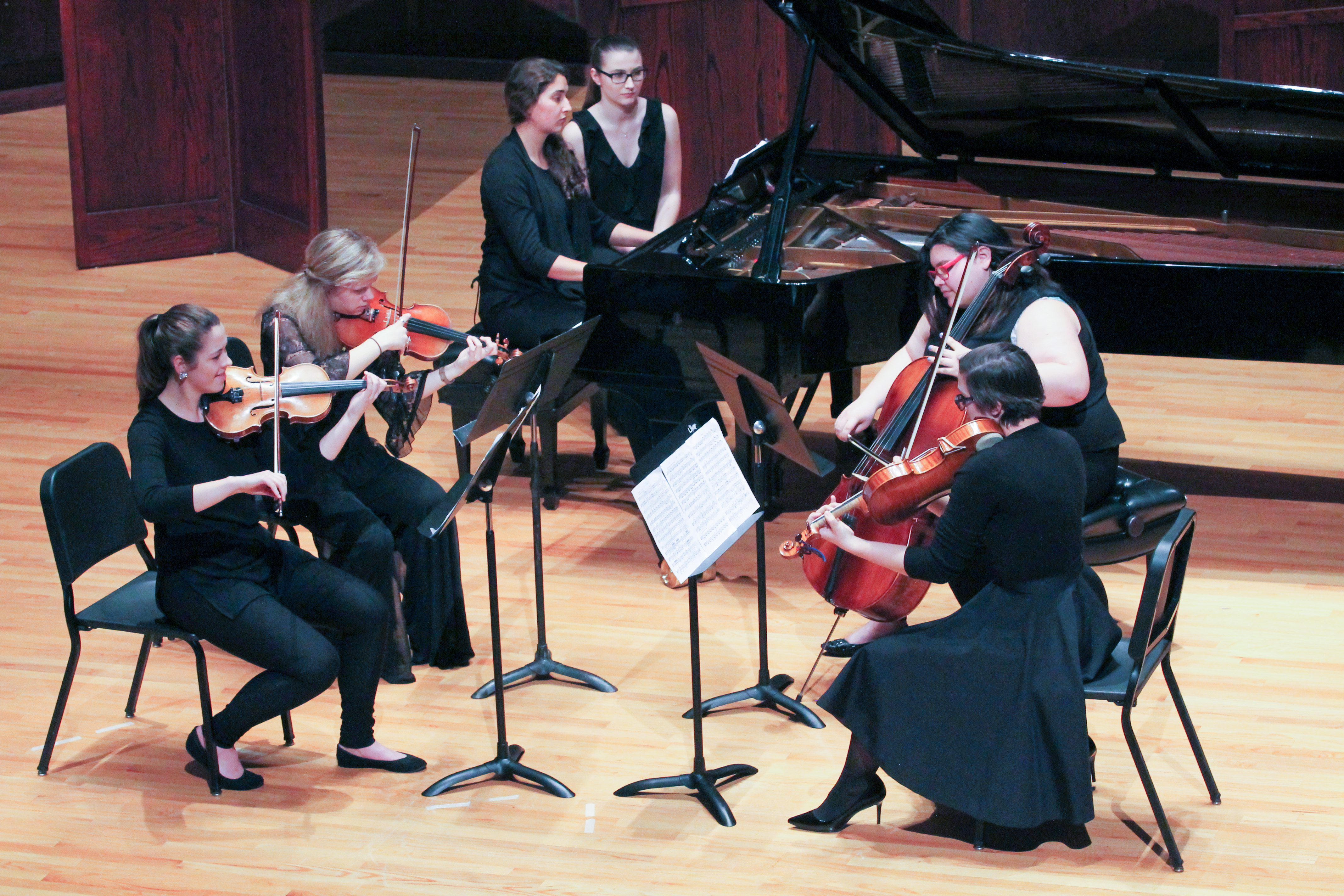 Associate Adjunct Professor of Music Dennis McCafferty remembers starting the first chamber ensemble at the University of Indianapolis with one string quartet. After 40 years of various roles within the music department, McCafferty watched his final Student Chamber Ensembles Recital as the strings ensemble coach on April 11 at 8:30 p.m. in Ruth Lilly Performance Hall.

After launching the chamber music program,  McCafferty has watched it grow from one string quartet to a course that had to be split into two separate classes for strings and is offered for brass, guitar and woodwind ensembles as well.

“It’s been very gratifying to see how it’s grown and how the students have responded to it,” McCafferty said.  “It’s been a great benefit to them to do something other than solo playing. It’s a total different experience to come together in a small group and have to work together and figure out music problems together.”

The performance began with the guitar ensemble, which included Jamie Johnson, Evan Hawk, Nathan Dirck and Brandon Meece, all coached by Nemanja Ostojić. The group performed the “Minuet” movement from “Orchestral Suit No. 20,” by J.S. Bach, arranged in Sakura method, and “Prelude II” and “Prelude I” from George Gershwin’s “Three Preludes.”

The choir performed “Le Tic-Toc-Choc,” by François Couperin, arranged by Trevor Wye and “Munster Bacon” and “The Girls from Farranfore,” both from “Two Irish Tunes for Pennywhistle and Flutes,” arranged by Dennis W. Ritz. The group closed by performing all three movements of “Piccolos in the Pub,” by Jonathan Cohen.

Kloeker was happy with the pieces he and his quartet performed, which they spent the spring semester learning and rehearsing.

“I really loved the second movement. It’s really pretty, and all the top three parts interact in the dotted quarter, and then the bass line goes under it,” he said. “I especially love the combination of the second and third movement, because the second is very slow and pretty, and then it just goes into this really happy, energetic song.”

Kloeker first began playing the viola in sixth grade and migrated to cello in junior high school, which he has been playing since. He said he gets tense rather than nervous while playing, but every time he performs, it’s an “ecstatic” experience.

“The music stops becoming this thing you’ve rehearsed for 12 weeks, and it becomes this alive, magical and beautiful thing that jumps out in Technicolor around you, and you can hear the parts interact with each other. It’s just this wonderful thing,” Kloeker said.  “Afterwards, it is a lot of relief and ecstasy. It’s like going to church and taking a test at the same time.”

For the last set of the evening, Ana Vitova, Paulina Beleckaite, Emma Bryant, Shaina Lescano and Allison Vickery performed “Quintet in A Major,” by Antonin Dvorák.

McCafferty said the students do most of the work on their own, learning their own individual parts and then coming together once a week for rehearsals. After years of coaching,  he said he gets anxious while watching his students on performance night.

“I feel like a father figure. You know, I probably get more nervous than they do because I know what we have worked on and what could possibly go wrong,” McCafferty said. “I’m just really proud of them when they pull it off, as they almost always do.”