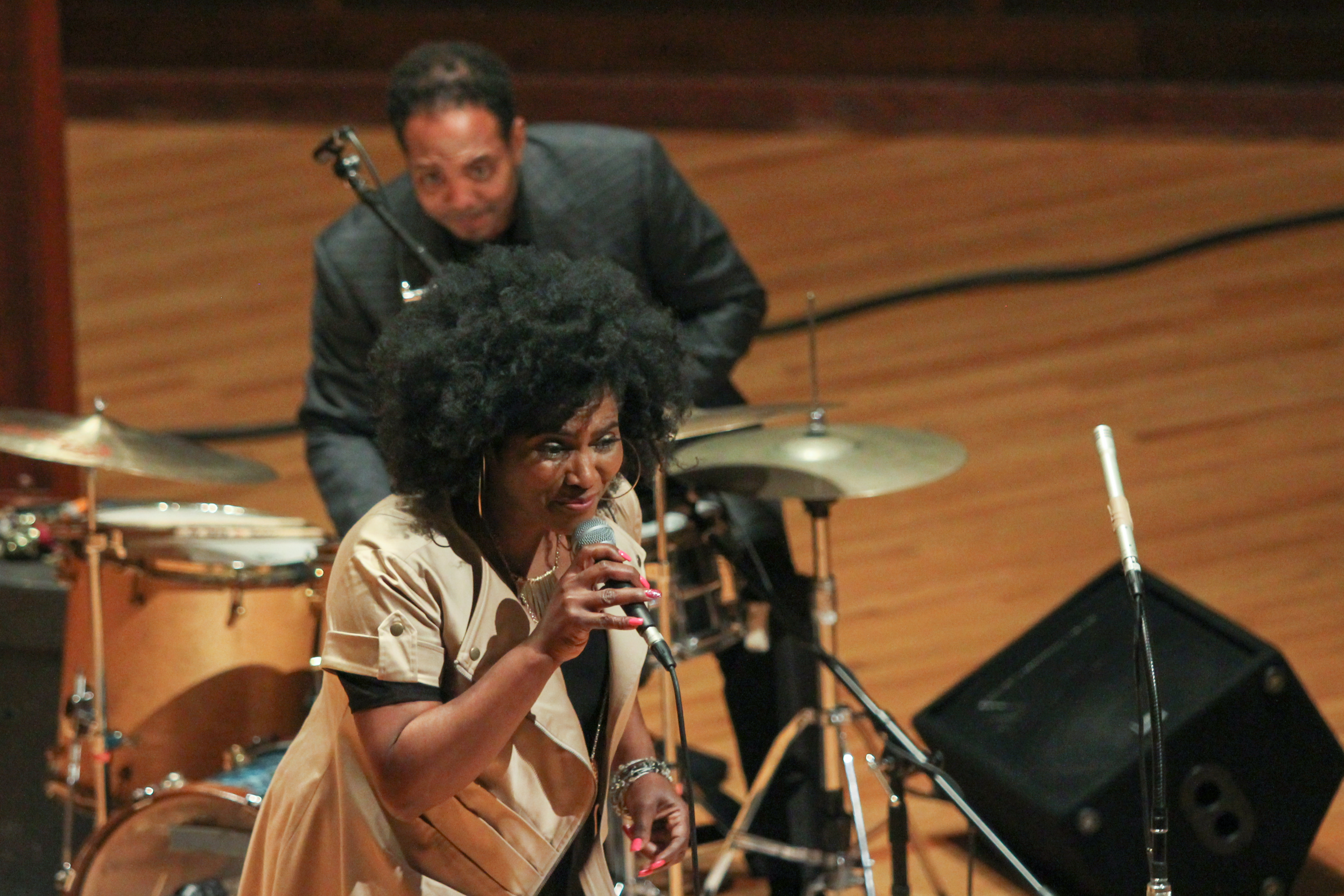 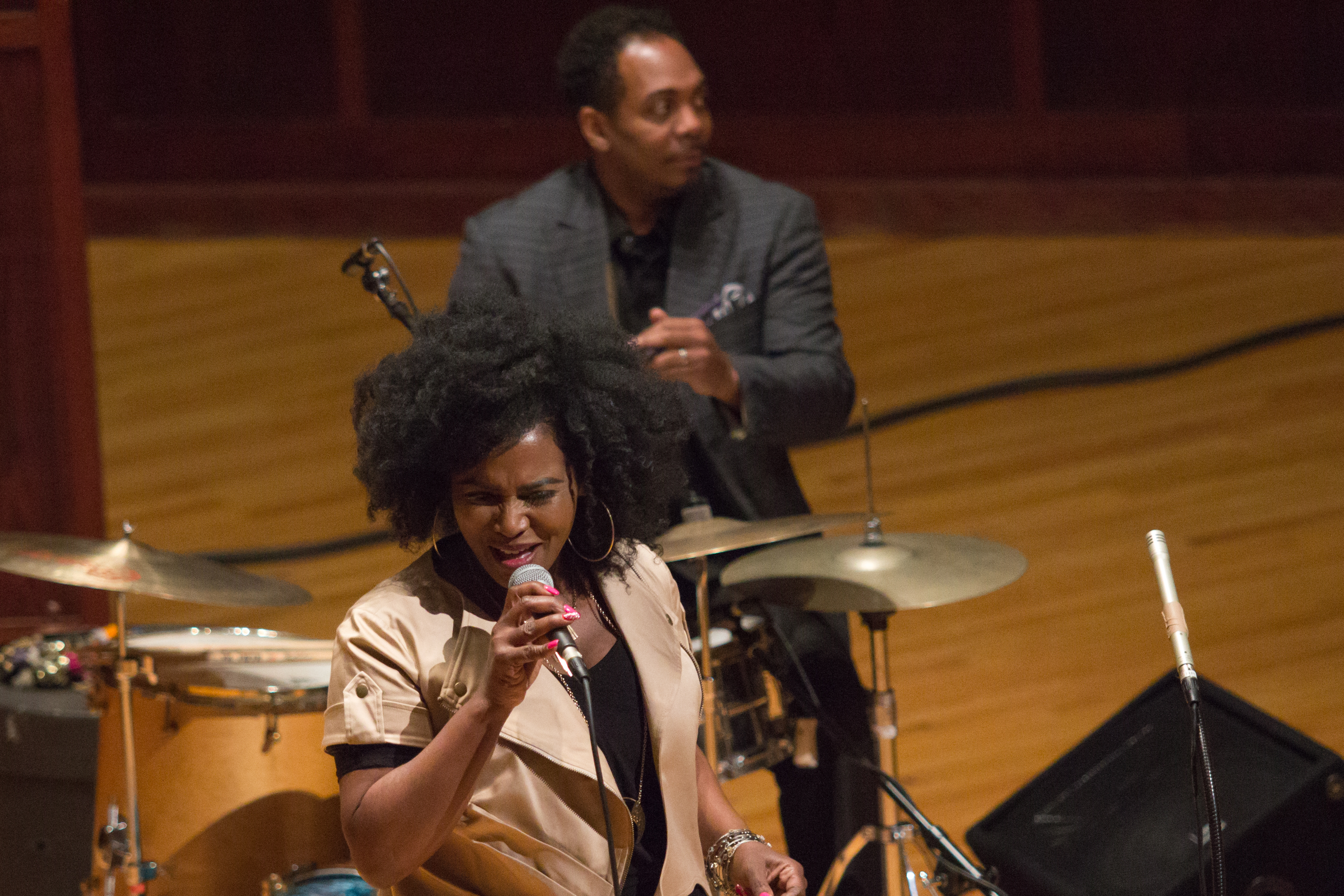 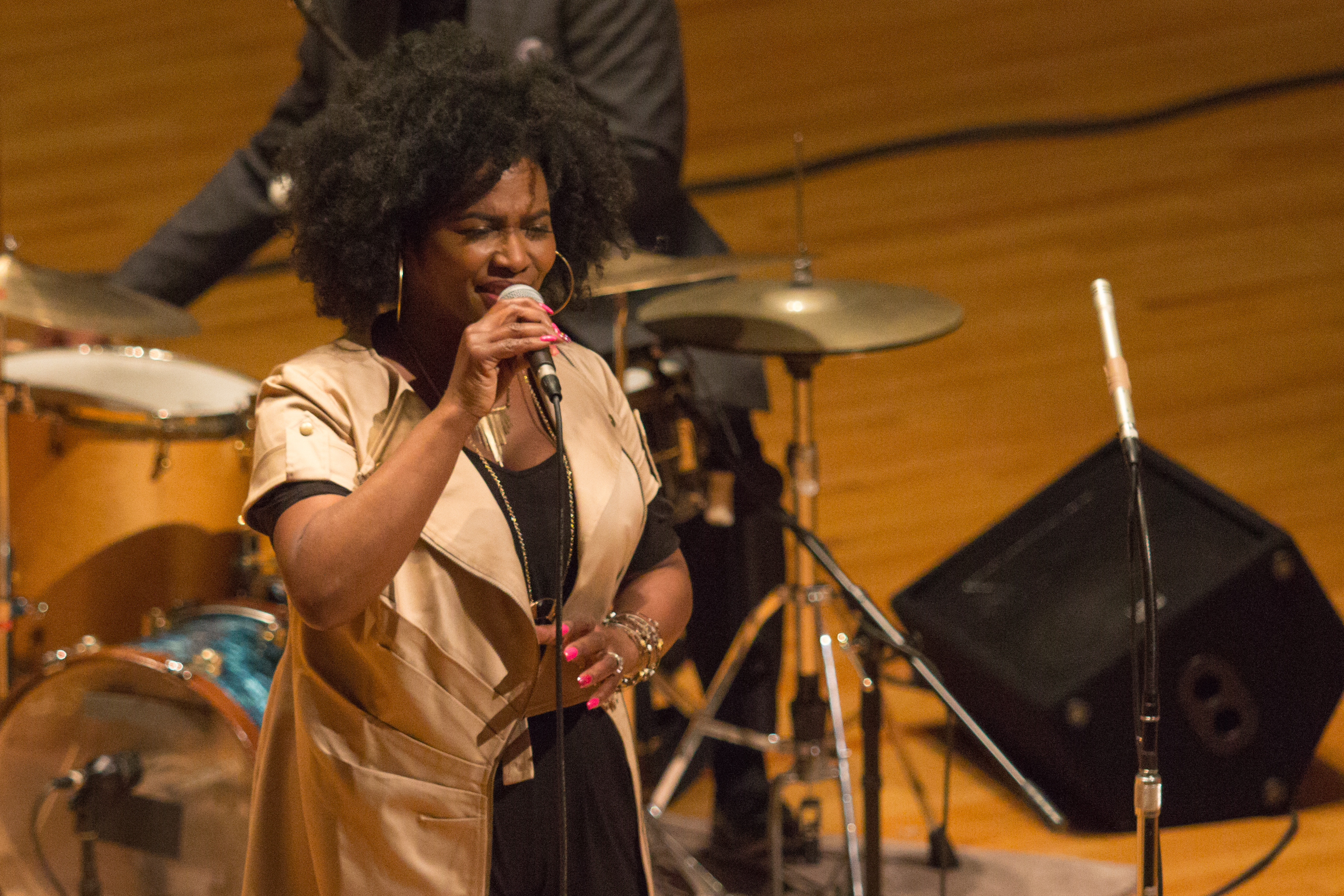 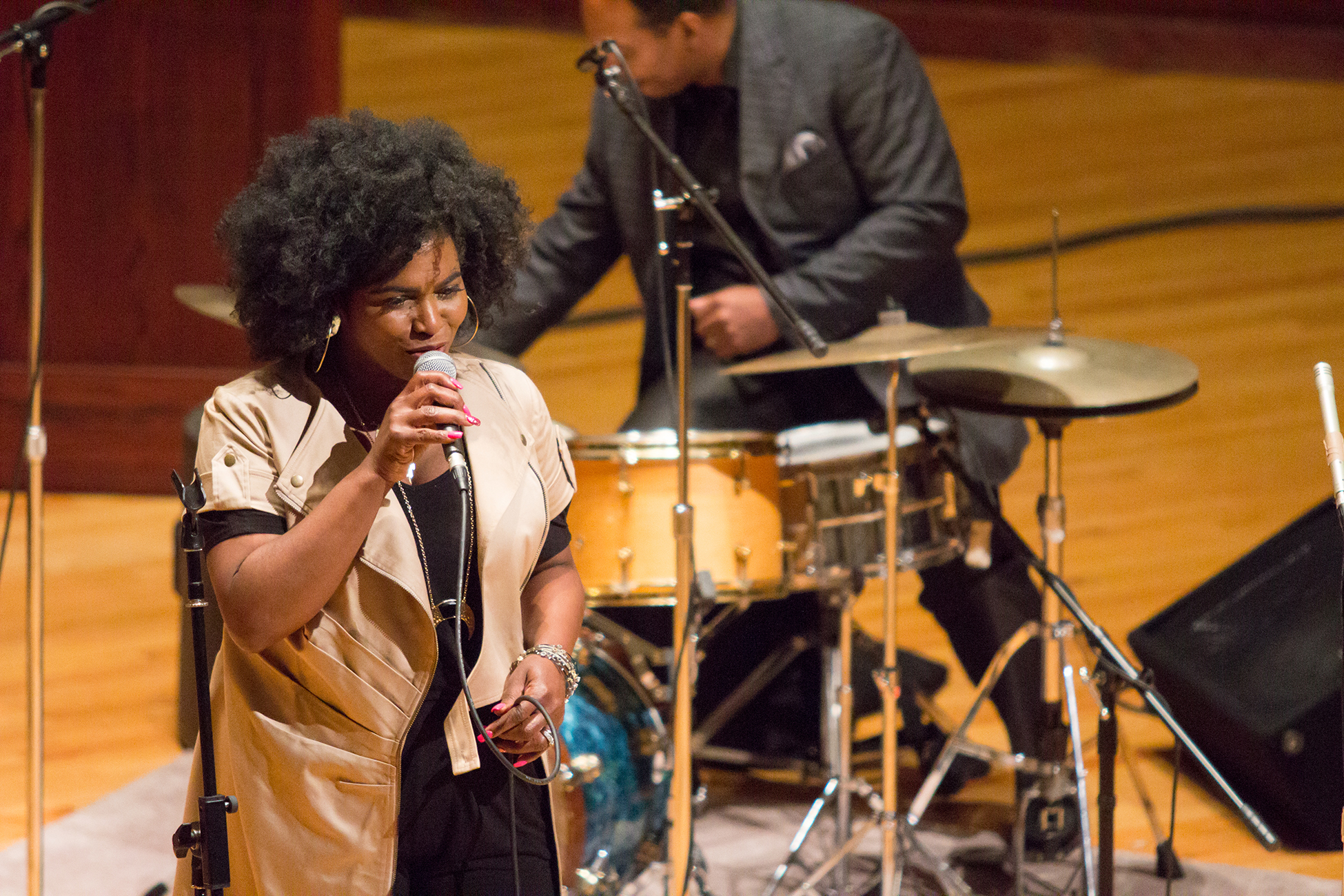 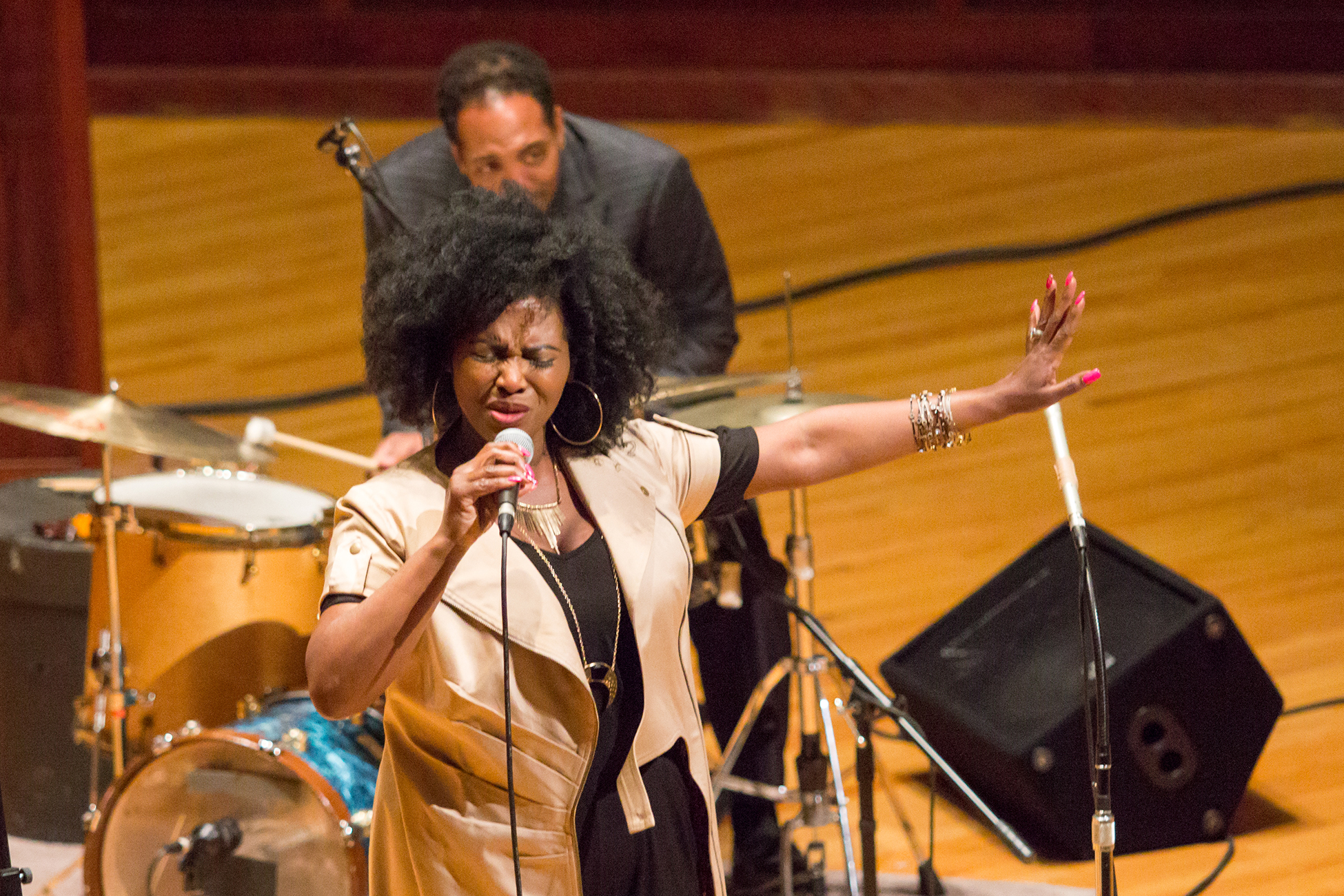 When Director of Jazz Studies Mark O’Connor hired drummer Kenny Phelps to perform the last concert of the Jazz Concert Series, he said that he knew Phelps would put together a great band. Phelps called on six other local jazz and blues artists to perform with  him on March 22 in the Ruth Lilly Performance Hall at 7:30 p.m.

“This is the final concert of the Jazz Concert Series [for the semester], and I wanted to celebrate,” O’Connor said. “This series is based on featuring all the Indianapolis musicians, and I figured that it was appropriate to have an Indianapolis all-star group to complete the series.”

Kenny Phelps, Valerie Phelps and Nicholas Tucker started off the concert by performing “Them There Eyes,” originally performed by Billie Holiday. Jones and Joel Tucker joined them on stage to perform Billy Strayhorn’s “Lush Life.” Following that, Jones, Kenny Phelps and Nicholas Tucker­—who sometimes perform as the Steven Jones Trio—played two pieces, “Fud,” by Jones, and a rendition of Prince’s “Thieves in the Temple.”

“I really like how they did a Prince song, and the bass didn’t have that classic sound,” she said. “There was kind of a jazz tone to it, but it had a modern feel.”

The trio was joined on stage by Joel Tucker and Imboden’s performance  “Inner Urge” and “Writing Prompt Number Three” by The Tucker Brothers. Moorman, who plays the baritone saxophone in the UIndy Jazz Ensemble, took an interest in Imboden because of her experience playing saxophone.

“The jazz saxophonist had a really smooth tone [that] was very nice. Everything felt like it fell really nice on his fingers. His [Imboden’s] demeanor was interesting, honestly,” Moorman said. “He was very cool, like he didn’t have a lot of expression on his face; it all came out in his horn. His tone was flawless.”

Robinson joined  The Tucker Brothers, Jones and Kenny Phelps on the stage to perform a few blues pieces. His first song was “Trouble in Mind,” by pianist Richard Jones, followed by “Mean Old World,” by T-Bone Walker, and “There’s a Train,” by The Holmes Brothers.
Moorman said that Robinson’s rendition of  “There’s a Train” was her favorite piece performed.

“I liked ‘There’s a Train.’  It was soulful, and it highlighted each of the instruments really well, including the vocals; and the piano had an amazing solo in that piece,” Moorman said. “It had a lot of emotion; it was very real.”

Valerie Phelps joined Kenny Phelps, Jones and the three members of The Tucker Brothers for the final piece of the performance, “What a Difference a Day Makes,” made popular by Dinah Washington.

“There was a great quiet energy. Even if he [Kenny Phelps] wasn’t making a lot of noise, there was still a quiet energy that added a lot to the group,” Moorman said. “Valerie Phelps used her voice as more of an instrument, and it didn’t overpower or wasn’t masked by the group. It was just another instrument, especially if she was scatting. Tad Robinson, I just really liked him. He had a great voice and a lot of energy.”

“That [Jazz Week] features regional, nationally-known performers and/or nationally-known performer educators,” O’Connor said. “There are wonderful opportunities to hear the concerts, but also there will be jazz improvisation workshops, and the UIndy Jazz Ensemble is performing with all of the guest artists, with the exception of my own group. I hope to see as many people out for Jazz Week as possible. It’s a lot of world class music that we’re able to put on.”

Jazz Week began April 4th at 7:30 p.m. with a performance by the UIndy Jazz Combo and Ensemble in the Ruth Lilly Performance Hall.  Other performers for the remainder of Jazz Week will include the Dan Hearle Trio, trombonist Tim Coffman, vocalist Typhanie Monique and O’Connor’s ensemble, which features Kenny Phelps.

A warm welcome to RLFC