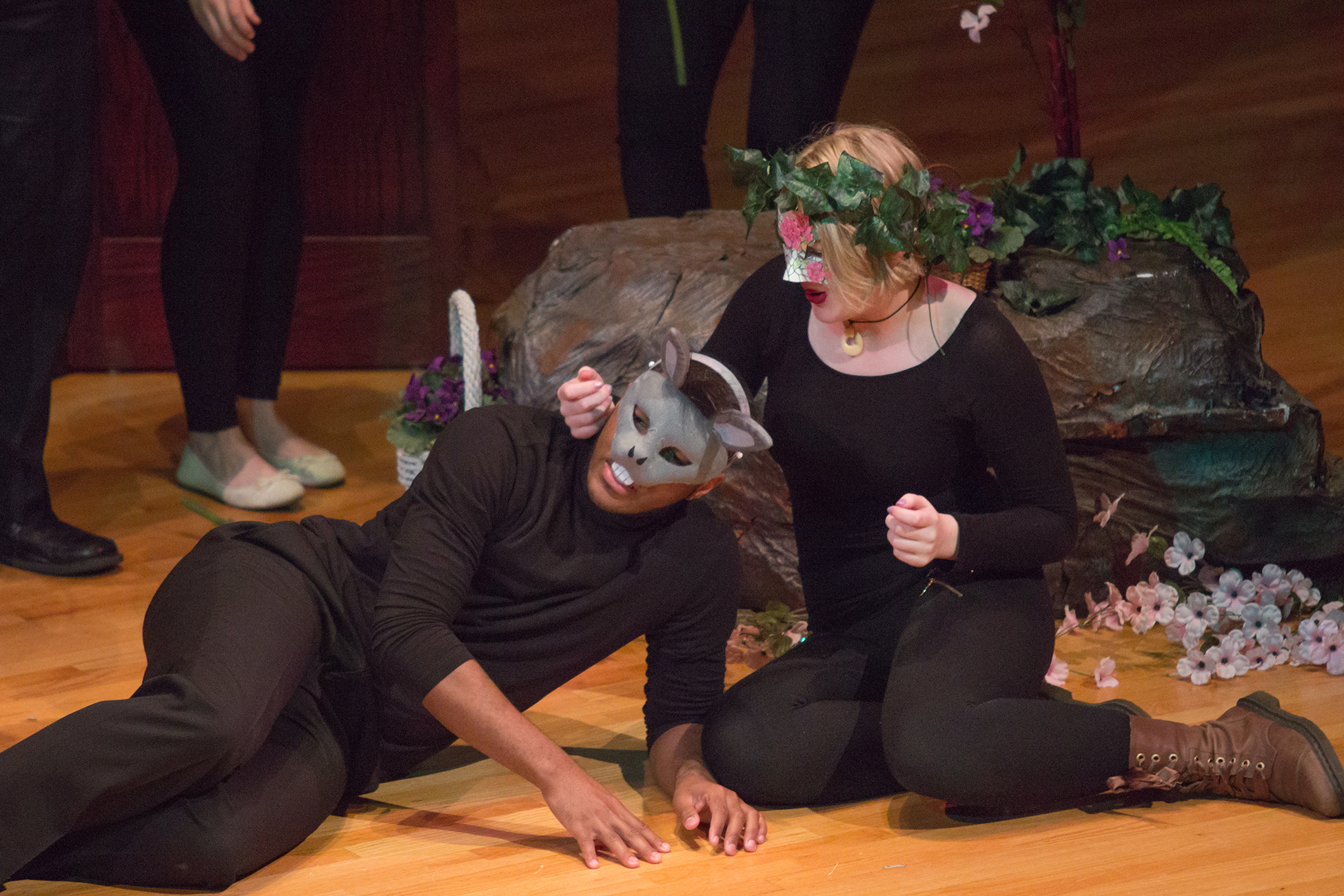 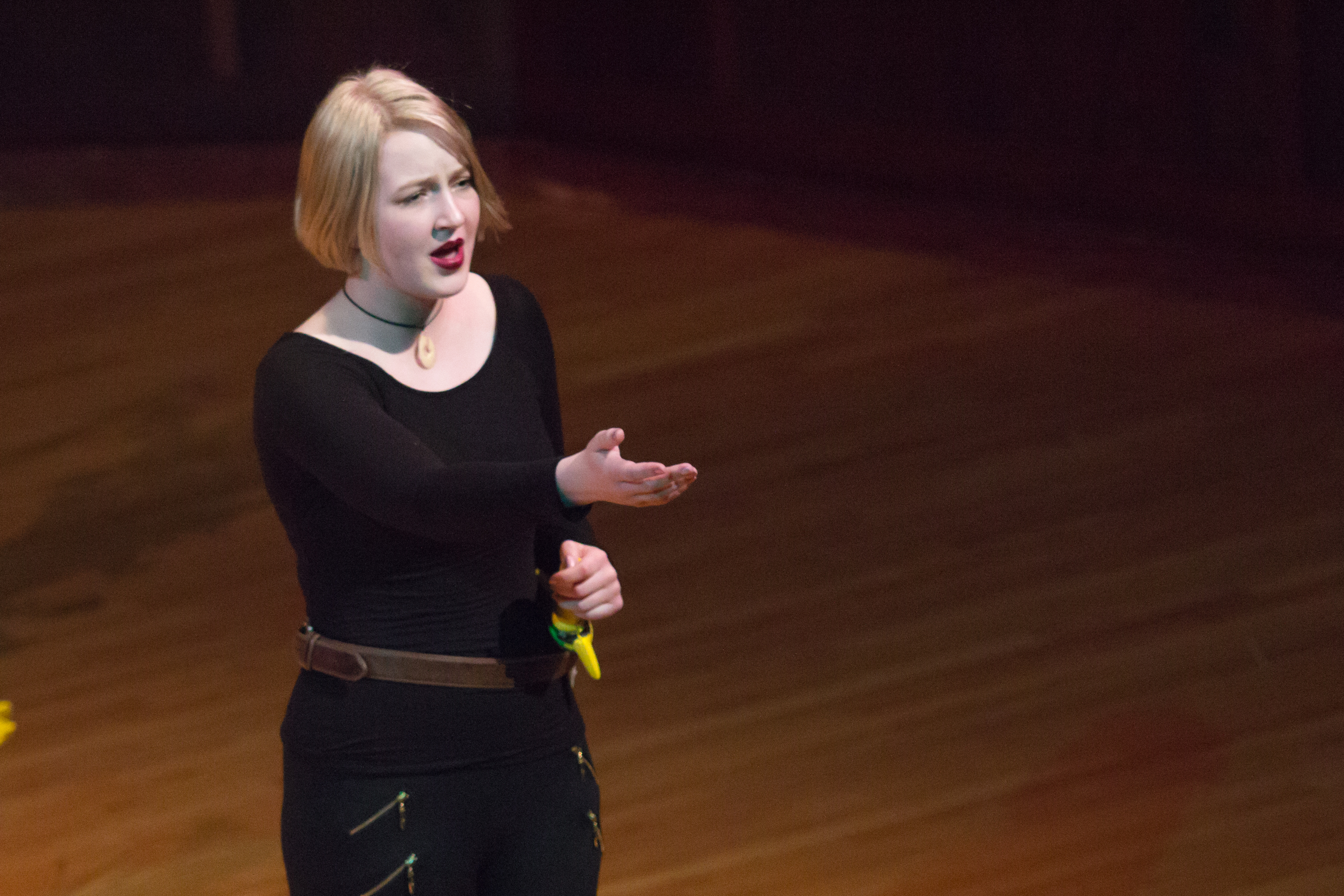 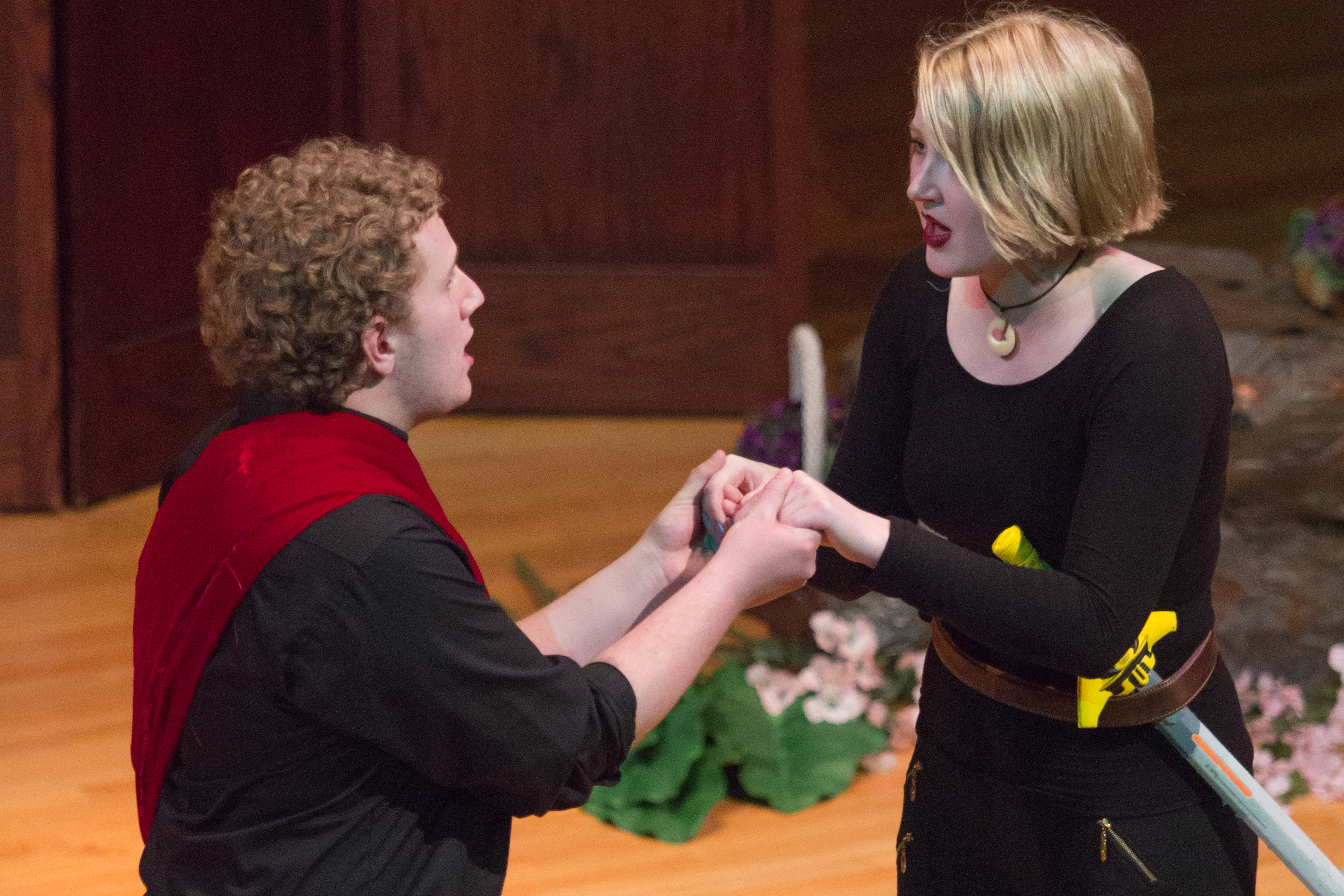 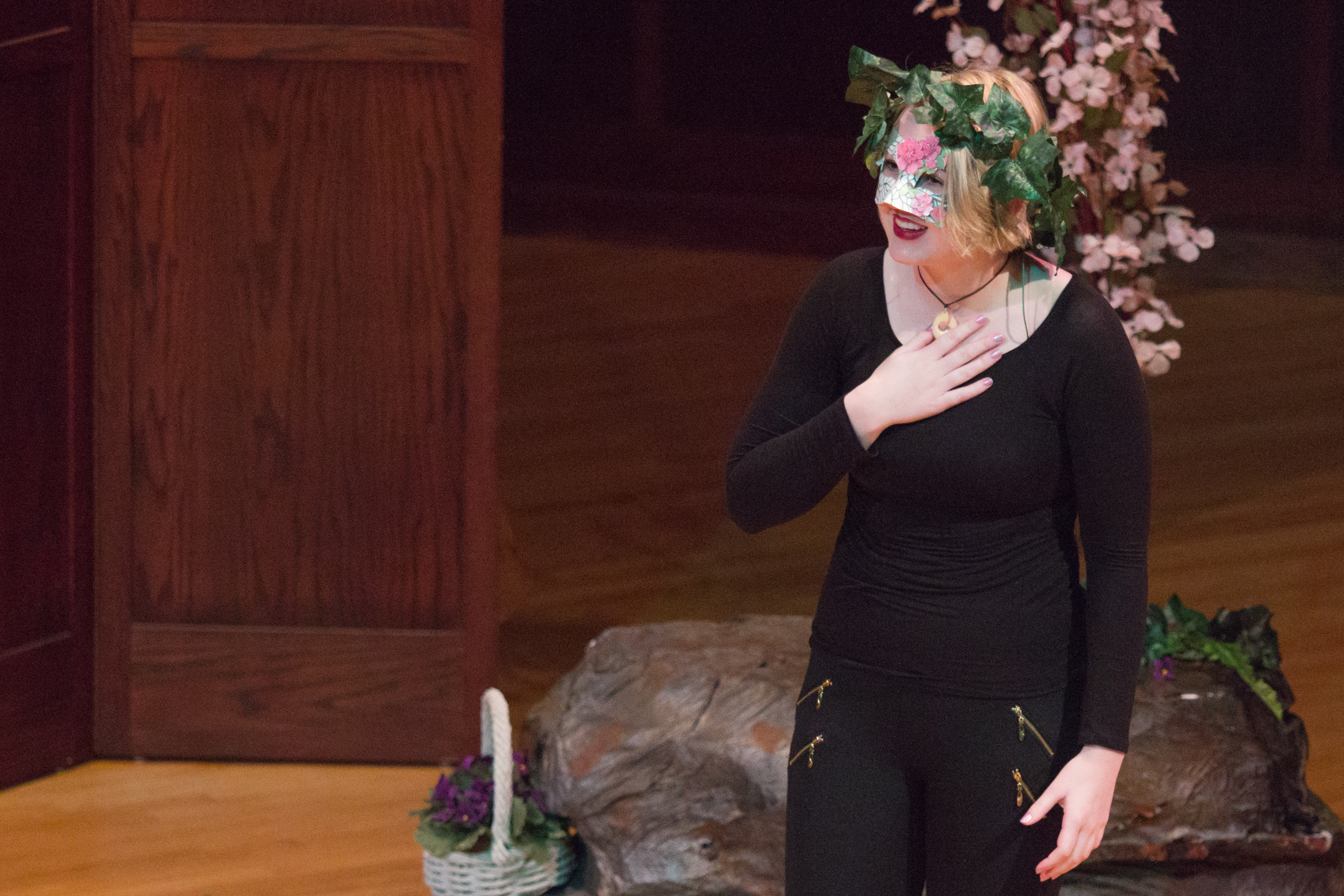 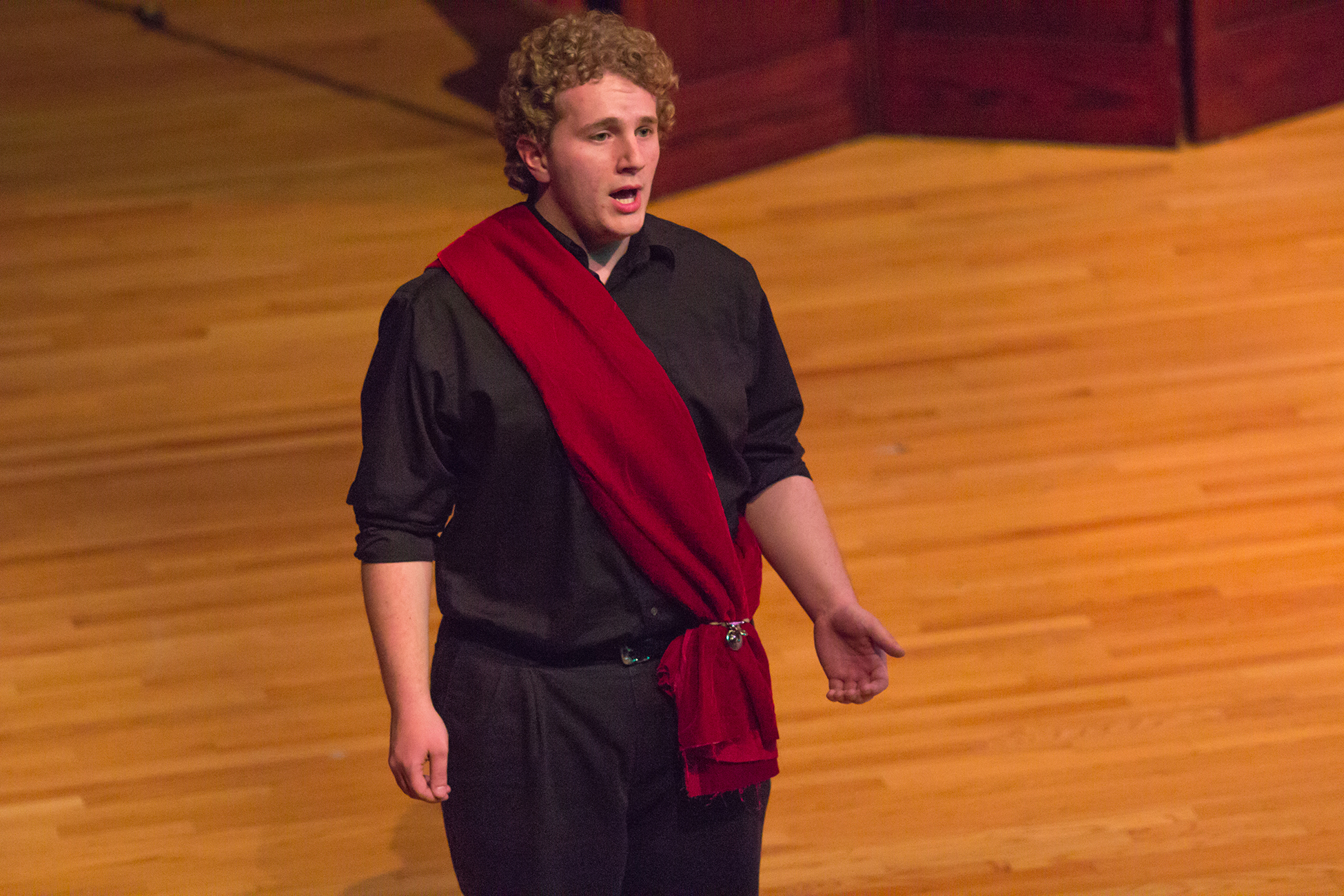 UIndy music students performed a selection of Opera Scenes on March 25 at 7:30 p.m. in the Ruth Lilly Performance Hall. The theme of the show was “Spellbound by Love,” and the show featured work from five different artists and composers. The recurring themes in each of the different scenes were fights a or searches for love.

The show opened with an excerpt from “Pirate Queen,” by Claude-Michel Shönberg featuring Fallon Smyl and Brenden Everett. The two sang of a love separated by many miles of sea. The song ended with a passionate kiss shared between the two performers.

“Opera scores have some of the most beautiful music ever written” said freshman biology major Rashawn Mills. “It [Opera] takes a certain skill level. So for me to be able to do it is an honor.”

The cast acted out scenes from William Shakespeare’s “A Midsummer Night’s Dream,” which is about a fairy princess spellbound by love for a man with a donkey’s head, before performing the opera version of the play written by Benjamin Britten.

Shakespeare’s play was a familiar subject for some of the cast and drew the most laughter and applause from the audience.

“I had done the play in high school, so it was easy for me to pick up the character and the lines” Mills said.

The show switched to a scene from “Trouble in Tahiti” by Leonard Bernstein. The scene which featured freshman elementary education major Teyler Siples, Everett and Mills touched on the troubles of suburban life and one’s neverending desires.

“I love getting on stage and being another person,” Siples said. “Personally, I just think performing is a lot of fun. It’s something I have been doing for quite some time now.”

The show turned to a more mystical tone with scenes from “The Medium,” by Gian Carlo Menotti. In the scenes, people seek to reconnect with their dead relatives through a medium but end up disappointed.

“My favorite part of the entire thing would have to be playing Toby, who is the mute child in ‘The Medium,’” Mills said. “I connected to the character on a spiritual and emotional level. He doesn’t sing in it, but I love how he can express himself through actions and body language. The experiences he had in the entire opera would be heart-wrenching so I tried to tap into that emotional aspect of the character.”

The show ended with scenes from “Carmen” by Georges Bizet, which were performed in their original French. “Carmen” depicts love, seduction and heartbreak from the perspective of its title character.

“Carmen was not quite as obviously about being spellbound by love, but there was romance between Carmen and the Toreador, which got pretty heated,” Siples said. “I personally like opera because it is more than just your typical choir where you stand up on the stage, sing your songs and then leave. You actually get to take on a character and act along with singing.”

During Jazz Week at UIndy, Director of Jazz Studies Mark O’Connor will be performing in a UIndy album review concert, featuring nationally known percussionist Kenny Phelps on April 6 at 7:30 in the Ruth Lilly Performance Hall.