Currently tied for first in the Great Lakes Valley Conference East, and ranked No. 17 in the National Collegiate Baseball Writers Association poll, the University of  Indianapolis baseball team won its series 3-1 against Bellarmine University on the weekend of April 23-24.

Prior to Saturday’s games, Associate Head Baseball Coach Al Ready said he is sad to see this day come.

“The senior class we have right now is just a phenomenal group of kids. I can’t say enough about all of them,”  Ready said. “….I am just so proud of all of them. They have just all come a long way. You have a mix of transfers and a mix of kids who have been here [for] four years, and all of them have contributed in some way, shape or form to the growth and the success of the program.  It is a great group of kids. I am going to be very sad to see them go at the end of the year.”

Senior pitcher Matthew Kaplanis took the mound for the Hounds against Bellarmine University on Senior Day. Photo by Cassie Reverman

Kaplanis had  mixed emotions about Senior Day but looks at it just like any other game.

“It is kind of surreal. It hasn’t really hit me a whole lot yet,” he said. “I am excited to play [just] like every other weekend, but hopefully it is a little more special.”

Game one against Bellarmine was won 4-3 by UIndy. After the sixth inning the teams were tied at 3-3, but in the bottom of the ninth redshirt freshman infielder Macey Holdsworth’s single allowed sophomore infielder Storm Joop to cross home plate giving the Hounds the lead.

The Hounds and Knights took game two to 15 innings with a 1-1 score. Bellarmine went on to win the game 4-1. UIndy’s only run came from junior catcher Dylan Jones’  home run in the sixth. 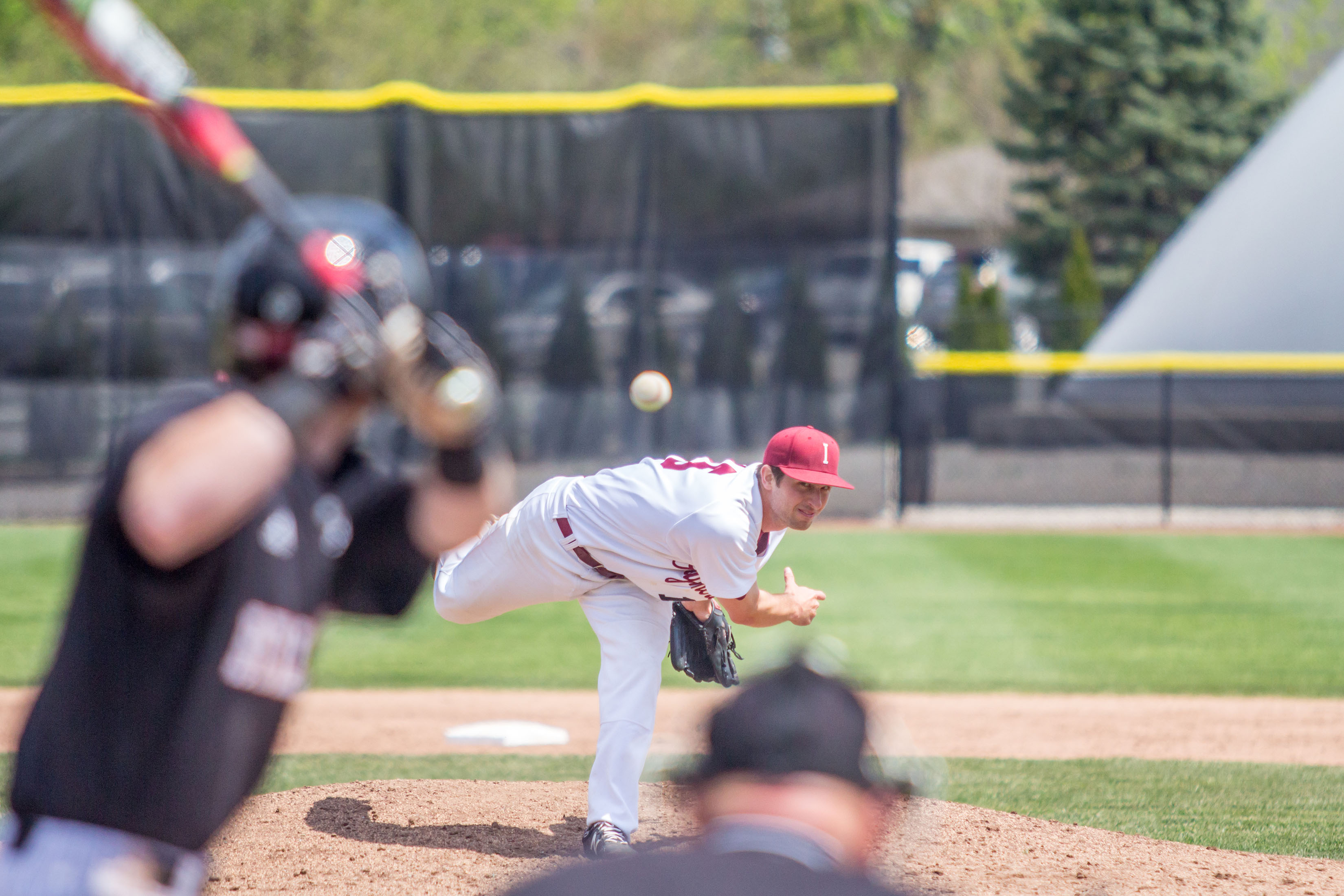 With a total of 12 hits in game three, the Hounds pulled away with a 3-1 win after Hawk’s double allowed freshman outfielder Devin Hensley to score in the third inning. Before the inning closed out Joop’s single scored Hawk and Ritchie.

In the last game of the series, UIndy had 16 hits compared to the Knights 13. Heading into the ninth inning the Knights were up 14-12, but after a homer from Jones with junior outfielder Joe Trennepohl on base the score was tied at 14-14. With two on base, the Knights walked Thomas for a bases loaded situation. After the walk, Hawk stepped up to the plate and was hit by a pitch that allowed the winning run.

The Greyhounds lost a regional game against the University Missouri-St. Louis. UIndy fell to the Tritons 8-6 on Tuesday, April 19.

After the loss to UMSL, Asalon said the Hounds were ready to redeem themselves.

“I think we are all a little antsy to get back on the field, and we know we didn’t play as well as we can, so I think everyone is just really ready to get back out there [against Bellarmine],” Asalon said.

Eight of the Hounds’ 11 runs in game one came in the first inning.  The eight runs were scored after four hits, two of which came from Hawk. Kaplanis pitched six innings to earn the win on the mound and struck out 10 Rangers. During game two, the Greyhounds raked in eight hits, with Asalon and Thomas leading the team with two hits apiece.

On April 17, game one was won by the Rangers, with the only runs being scored  in the first and third inning. Wisconsin-Parkside had two runs at the bottom of the first and one in the bottom of the third. Game two proved to be different, with the Hounds crossing the plate nine times after eight hits. Even with the series win, Ready said the team needs to improve in various areas.

“I think the team performed very well. We made a few mistakes. You know, that has been pretty consistent with the series, so to speak, but your goal is to win three out of every four games,” Ready said. “It is always nice to get a sweep when you can get one, but three out of four is our goal, and we were able to accomplish that [against the University of Wisconsin-Parkside].”

With the GLVC Tournament approaching, Asalon believes that just winning a series is not enough.

“I feel that even though we won three out of four, we could still be a lot better,”  he said. “We still have room for improvement, in some areas especially.  Just offensively in game three, we struggled over the weekend, so we got to pick that up.”

UIndy now sits at 25-11 for the season, and Ready believes that part of the team’s success is because of the relationships the players have formed.

“You  know  we’ve had a  lot of acts of  senior leadership—not just senior leadership, but leadership among all the players even from the young guys. The freshmen have been in leadership roles this year,” Ready said. “We have had multi-contributions to every series we have played this year—not just from our starters­, but from our bench guys, too. They have been in every game. They have been ready to perform when called upon, and we have really just played team baseball. I think that has been a big part of our success.”

Along with the team’s leadership abilities, Kaplanis said the team’s success is also partially due to the players executing their positions.

“People just kind of know their roles and have accepted them. Very early on, it was everyone wants to play, obviously. But everyone has kind of settled in and realized what their role is, and they do it well,” Kaplanis said.

The Hounds’ next game is against  the Ohio Dominican University Panthers on April 27 in Columbus, Ohio.