The winning streak continues at four as the University of Indianapolis men’s lacrosse team beats Ohio Valley University 15-9 on Sunday, April 10. Prior to that the Hounds beat Lake Erie College 9-7 on April 7, and earned their first overtime victory against Walsh University 5-4 on April 2.

UIndy took on Ohio Valley University only three days after facing Lake Erie College, and because of the quick turnaround,  Head Men’s Lacrosse Coach Greg Stocks said the team needed to rest up in its short break before the April 10 competition.

“We just have to stay strong,” Stocks said prior to competing against Ohio Valley.  “It’s a real short turnaround, because we’re playing on Sunday [against Ohio Valley]. So we only get two days’ rest. And it’s staying sharp and staying fit for that game, [and] also making sure that we don’t overexert ourselves over these next couple of games and be[ing] ready to go against Ohio Valley.”

Freshman midfield Scott LaPoe charges the net in the Hounds game against Lake Erie College on April 7. LaPoe had one goal in UIndy’s 9-7 win over the Storm. Photo by Cassie Reverman

Ohio Valley scored three goals to open up the first quarter, but at 5:11 freshman midfield Kevin Spurlock began the Greyhounds scoring. Two minutes later, Spurlock found the back of the net again, and before the quarter was over freshman attack Shawn Kimble tied the game at 3-3 for UIndy.

The Fighting Scots took a 4-3 lead at 13:22, but junior midfield James Smith tied it right back up minutes later.  The Scots scored one more time before the Greyhounds tallied eight unanswered goals between the second and third period to make it a 12-5 game. The Greyhounds scored three more times before the final buzzer. 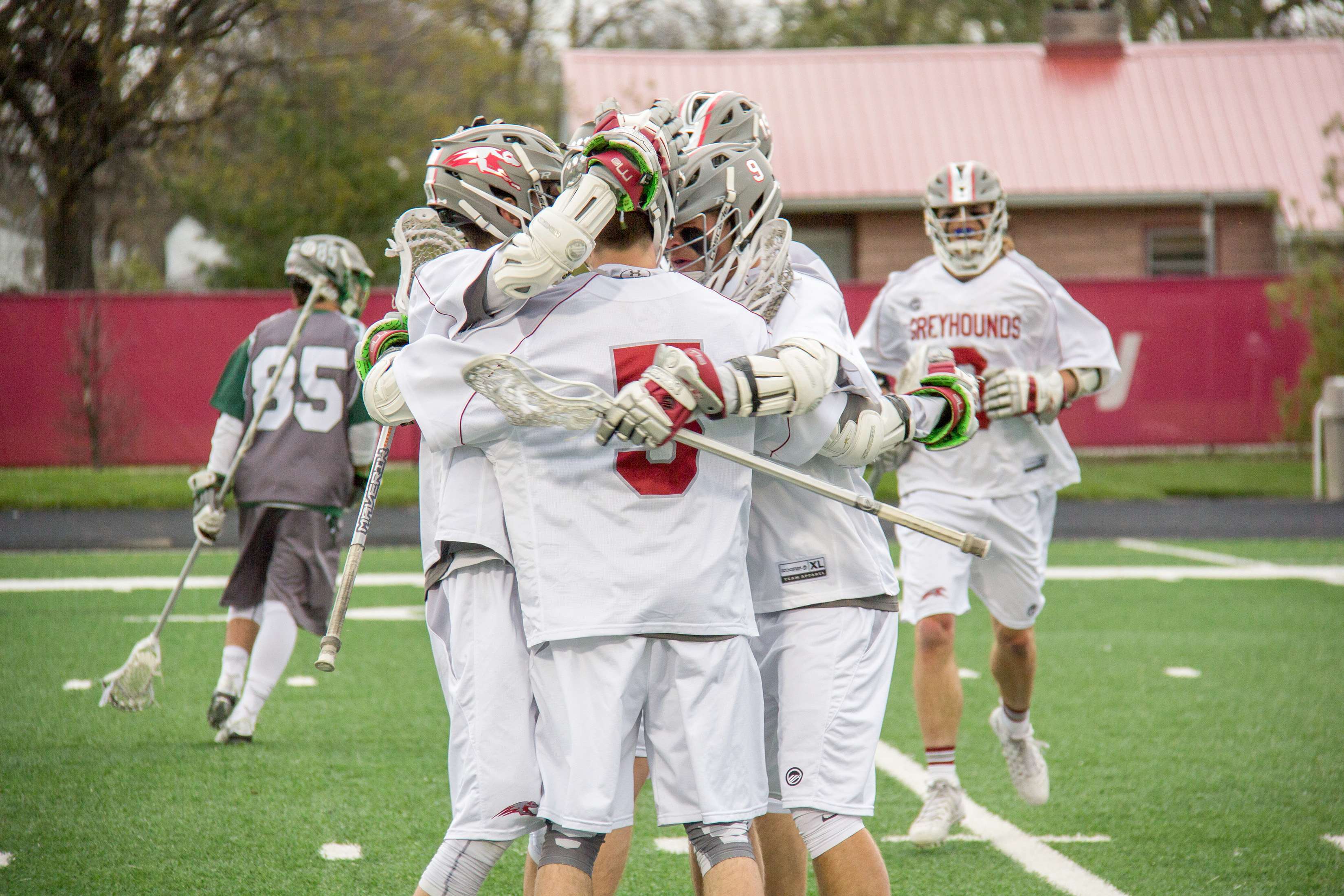 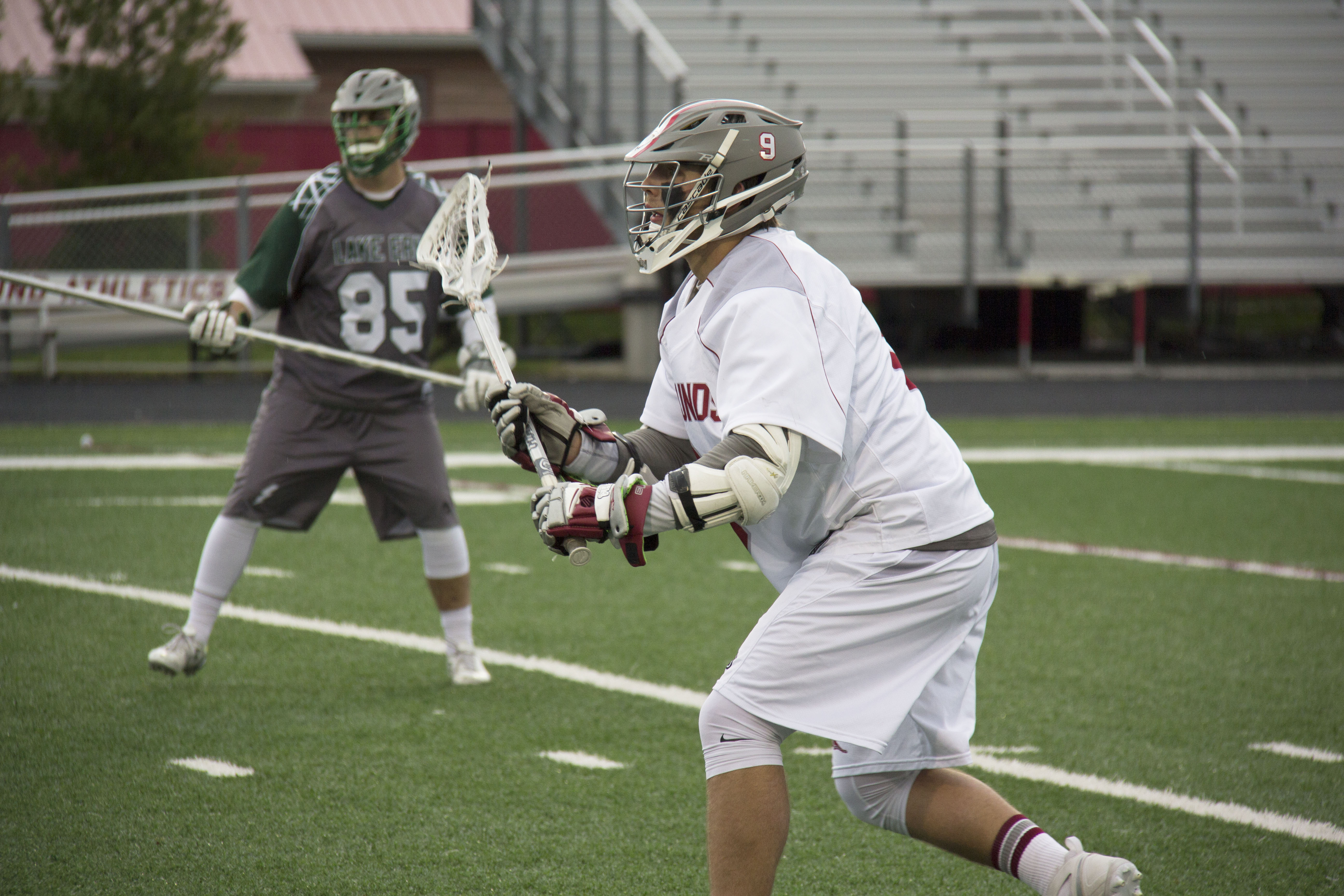 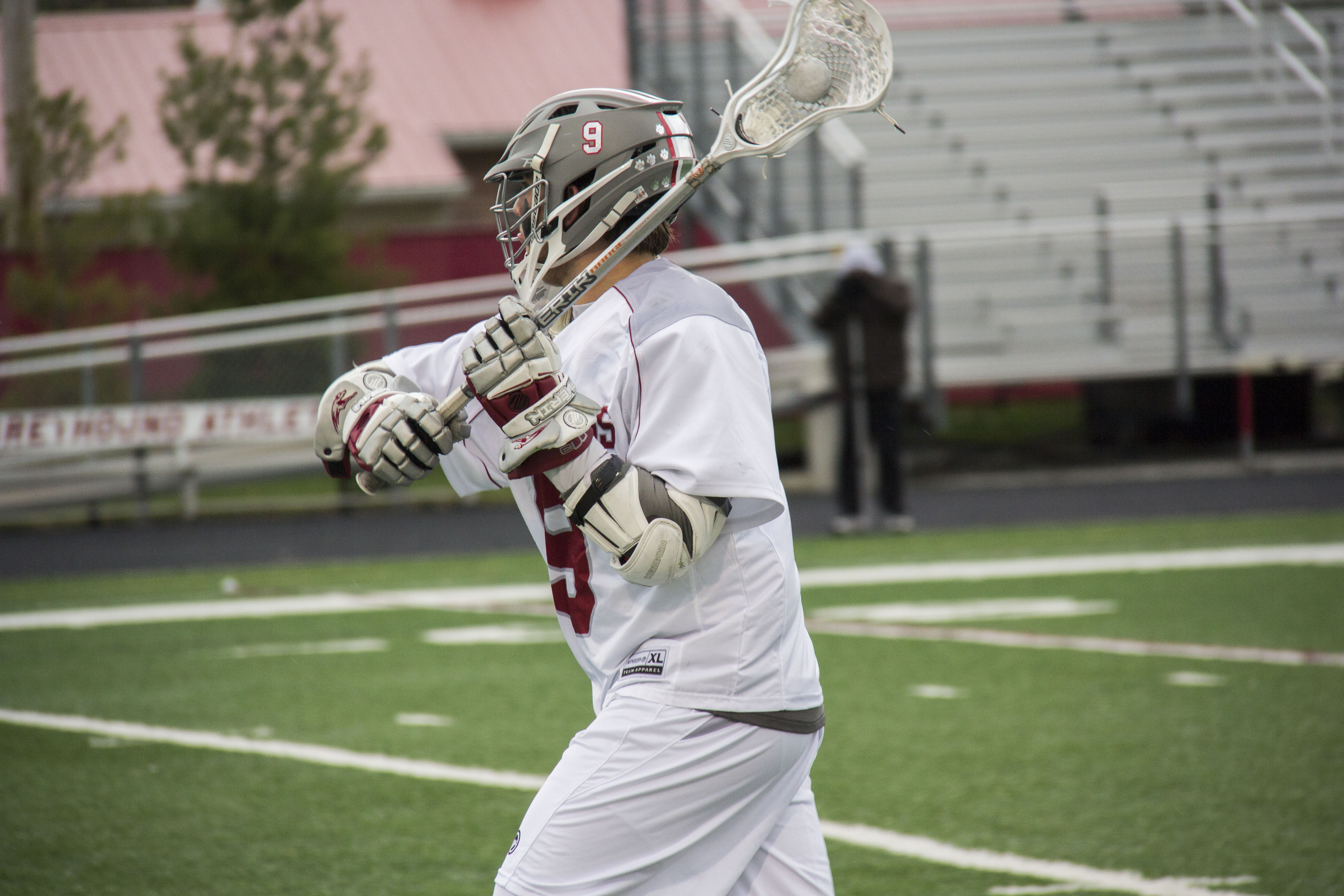 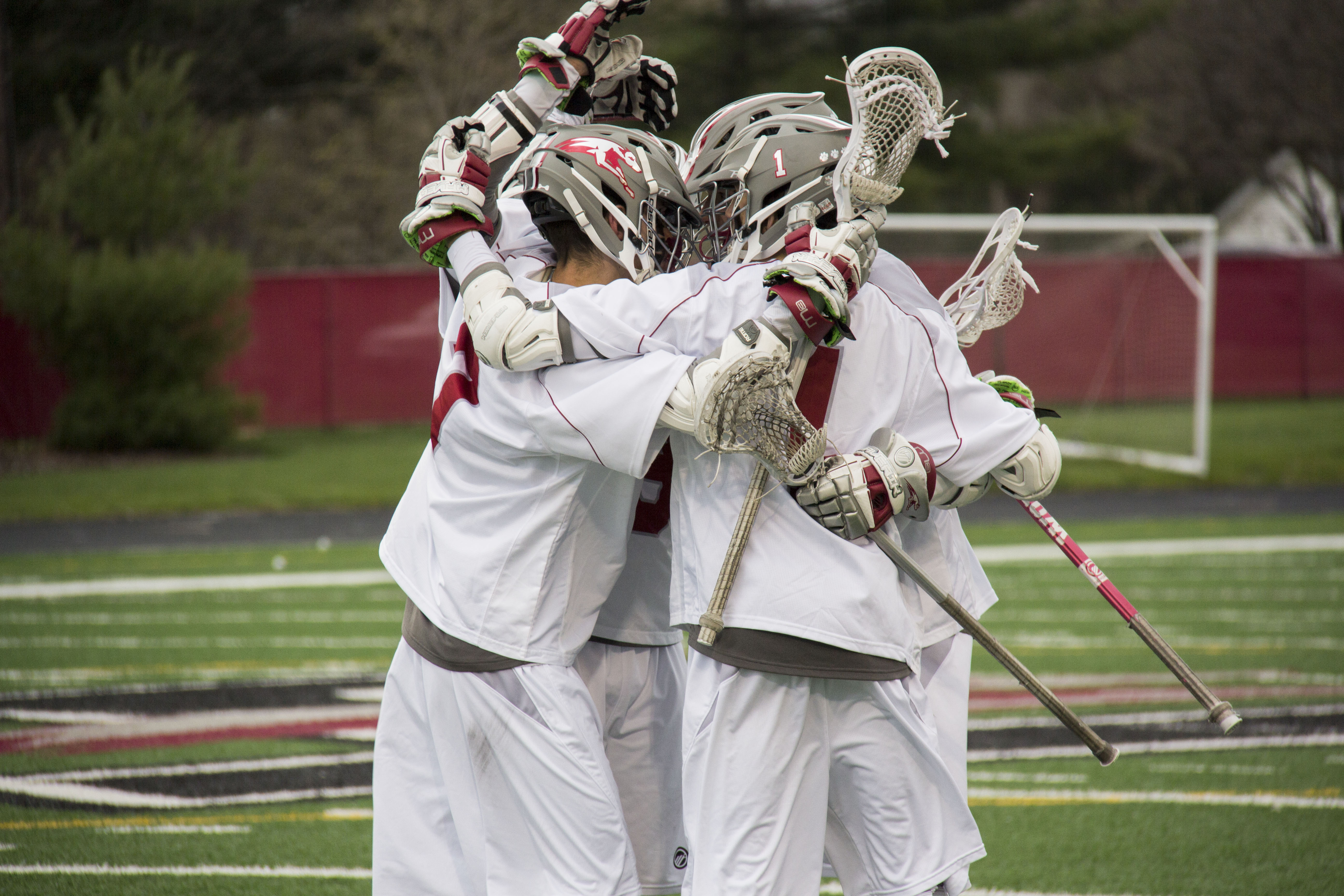 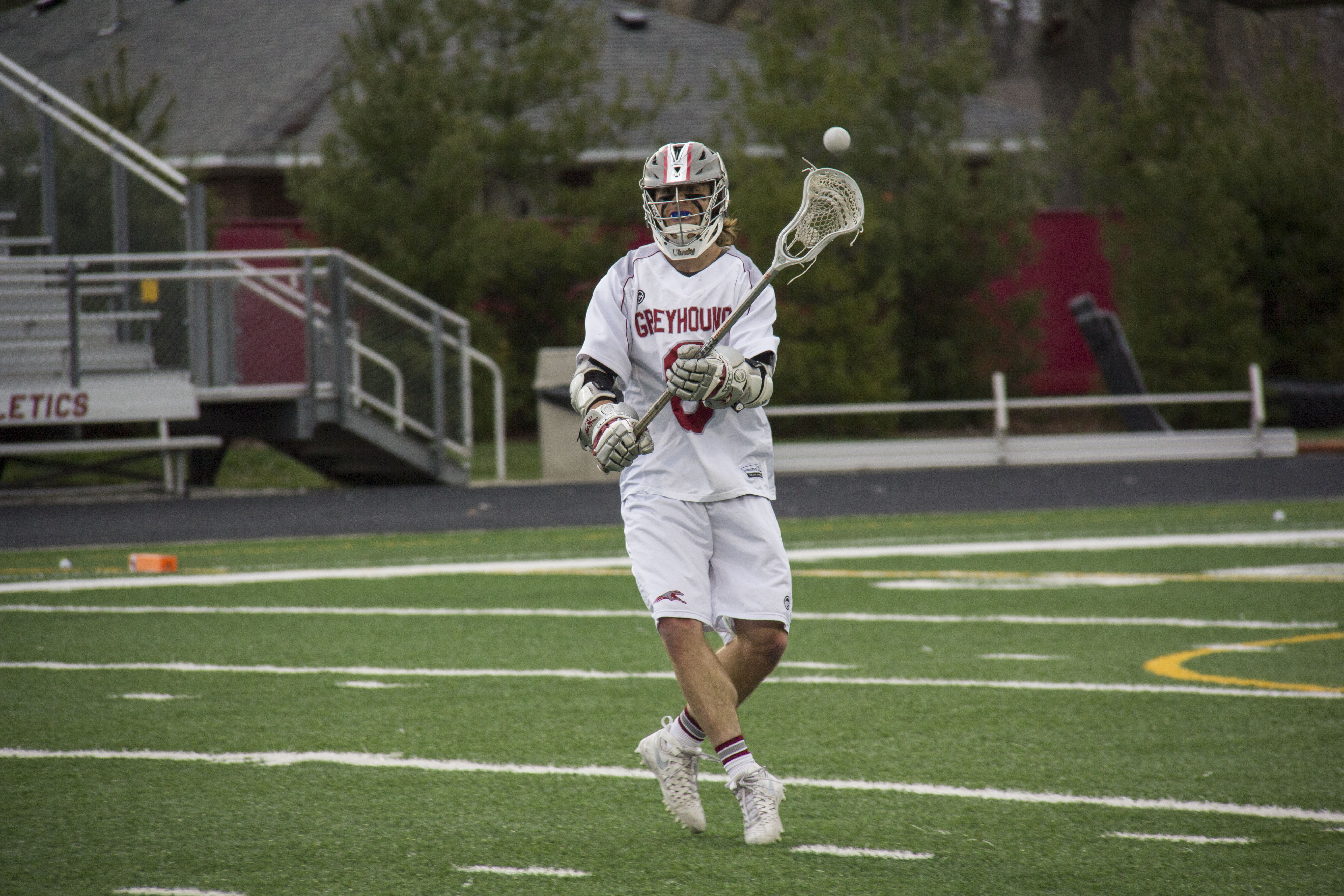 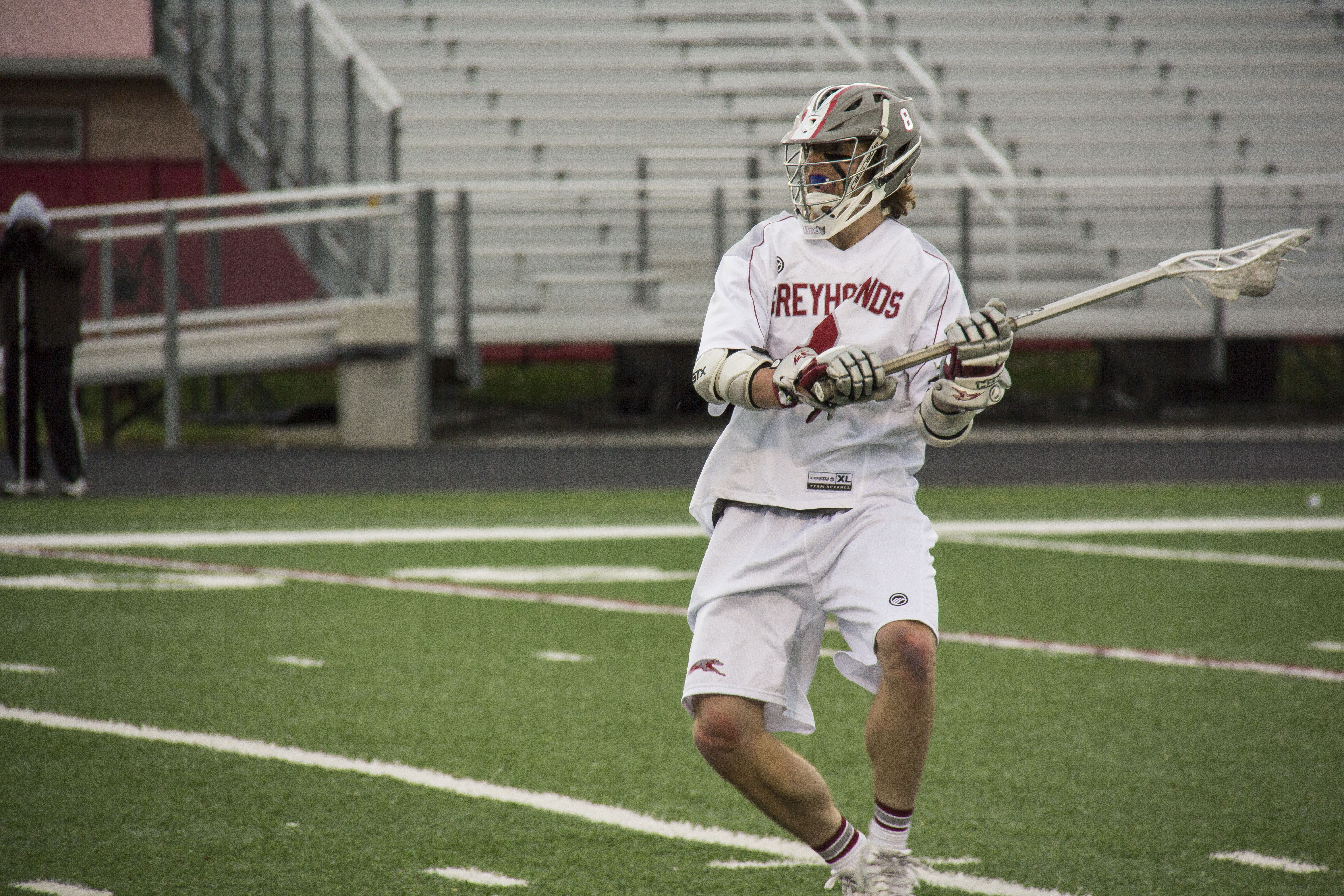 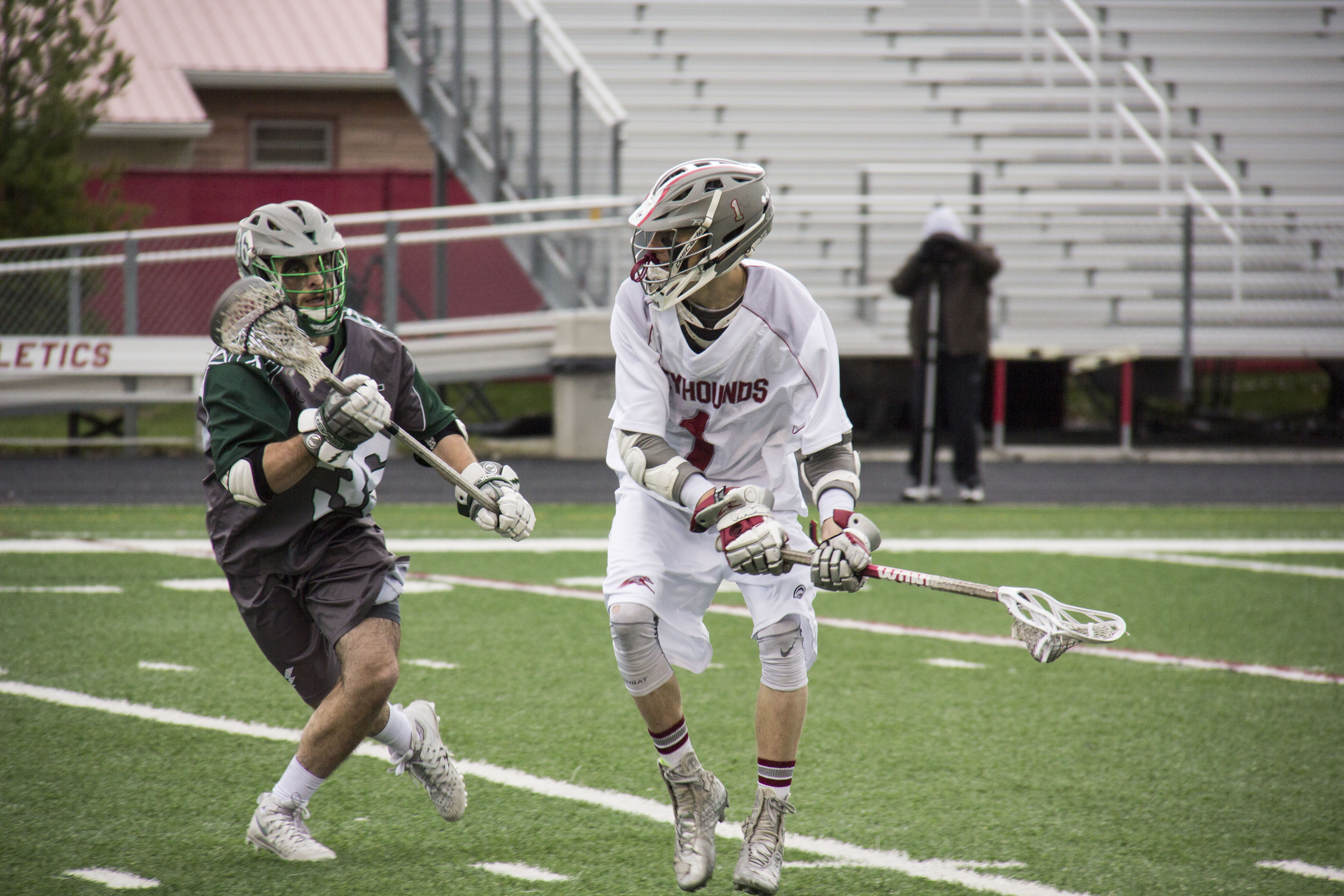 The goalie duties were split between freshman Jarod Kimble and sophomore Tanner Gurin.

Competing against Lake Erie College in front of a home crowd, the Hounds earned an early lead after a goal from Johnson at the 13:29 mark.  Despite an early goal, UIndy ended the first half down 4-2.  After the break, the Greyhounds scored four unanswered goals to close out the third quarter with a 6-5 lead.  The fourth quarter produced a total of five more goals, three of which were scored by the Hounds.

“Our unselfishness [helped us to get the win], to do that one more pass, and instead of getting a good shot, we’d get  [a]great shot,” Kump said.  “Ball movement and everybody getting involved helped us get the win [against Lake Erie].”

Six Greyhounds scored in the win. Johnson finished with two goals, while four other Greyhounds added one goal each. Kump led the team in scoring with three goals, including the tying goal to make it a 5-5 game with 6:32 left in the third.

“When I scored [the tying goal], I mainly just looked at the boys,” Kump said.  “I saw them all hyped up on the sideline and saw them reacting, and I had a big smile on my face.”

Kump said the win was a very important one, because the game was against a ranked team.

“It’s great for the program and for the guys,” Kump said. “We’ve worked all school year, busted our butts, and I think we deserve it.  We played great, moved the ball well, stuck to what our coaches told us to do and got the W.”

The Greyhounds had the program’s first overtime victory on April 2 over Walsh University. Freshman midfield Luke Allen scored the game-winning goal with an assist from freshman attack Tyler Johnston. Before the matchup, Stocks knew the game was going to be  competitive.

“We showed up [at Walsh University] playing a really gritty team at [their] home, and they didn’t want to lose in front of their home fans,” Stocks said.  “They gave us all they had, and luckily we were able to come out on top.”

UIndy took the first lead of the game in the second quarter when Smith connected with Spurlock to net a goal at the 1:31 mark in the second. The Hounds led 3-2 heading into halftime. Out of halftime, the Cavaliers scored two goals to take a 4-3 lead over the Hounds with 11:38 remaining in the third. Smith scored eight minutes later to tie the game at 4-4. The tied score remained throughout regulation and forced UIndy’s first overtime matchup.

One sudden-death overtime proved to be enough for UIndy.  Johnston connected with Allen at 2:10 to finish the game.

Four Greyhounds scored in the win, with Smith scoring two, and Johnson leading the team with 10 shots.

The next match for the University of Indianapolis is at 1 p.m. on Saturday, April 16, against Seton Hill University at Key Stadium.