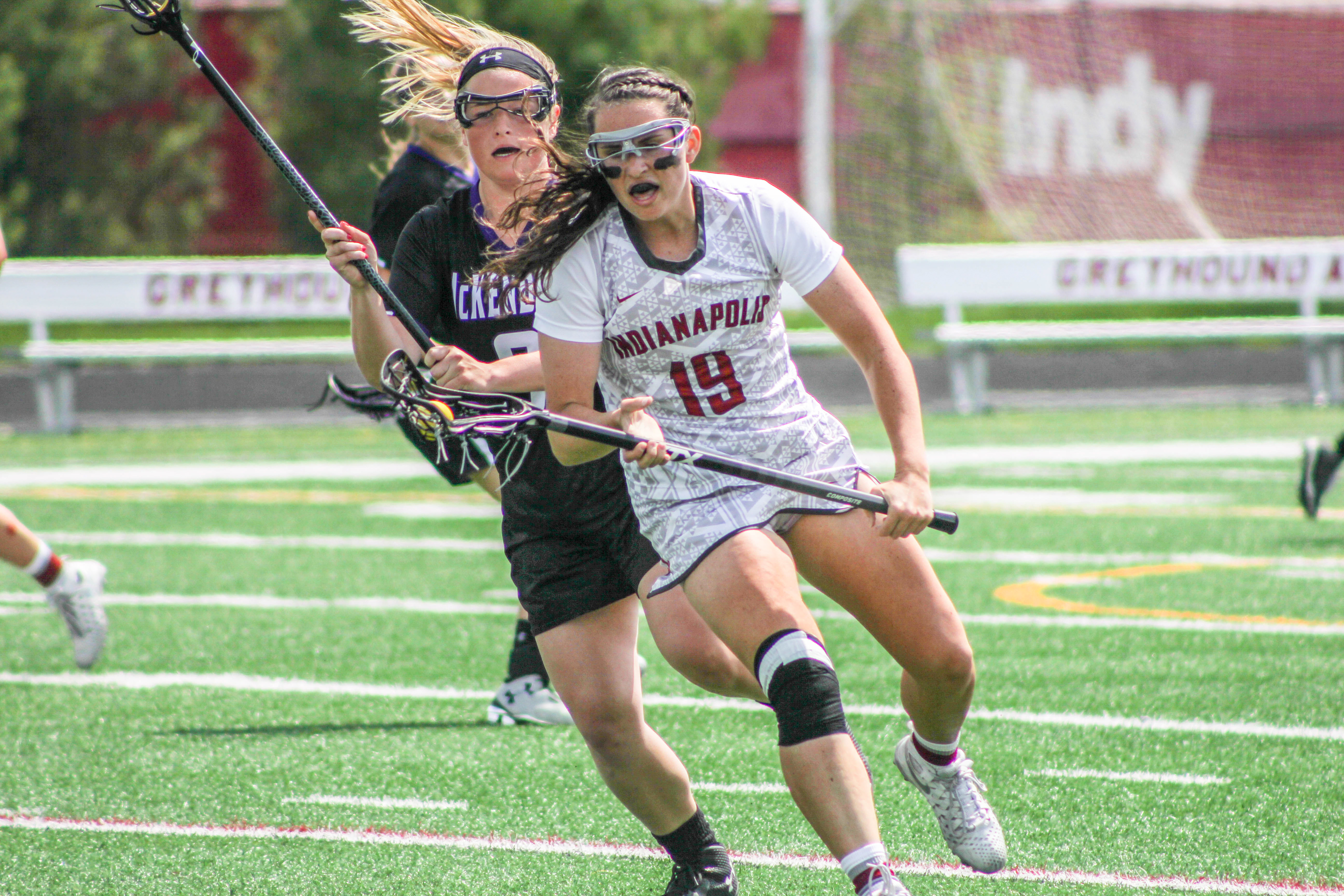 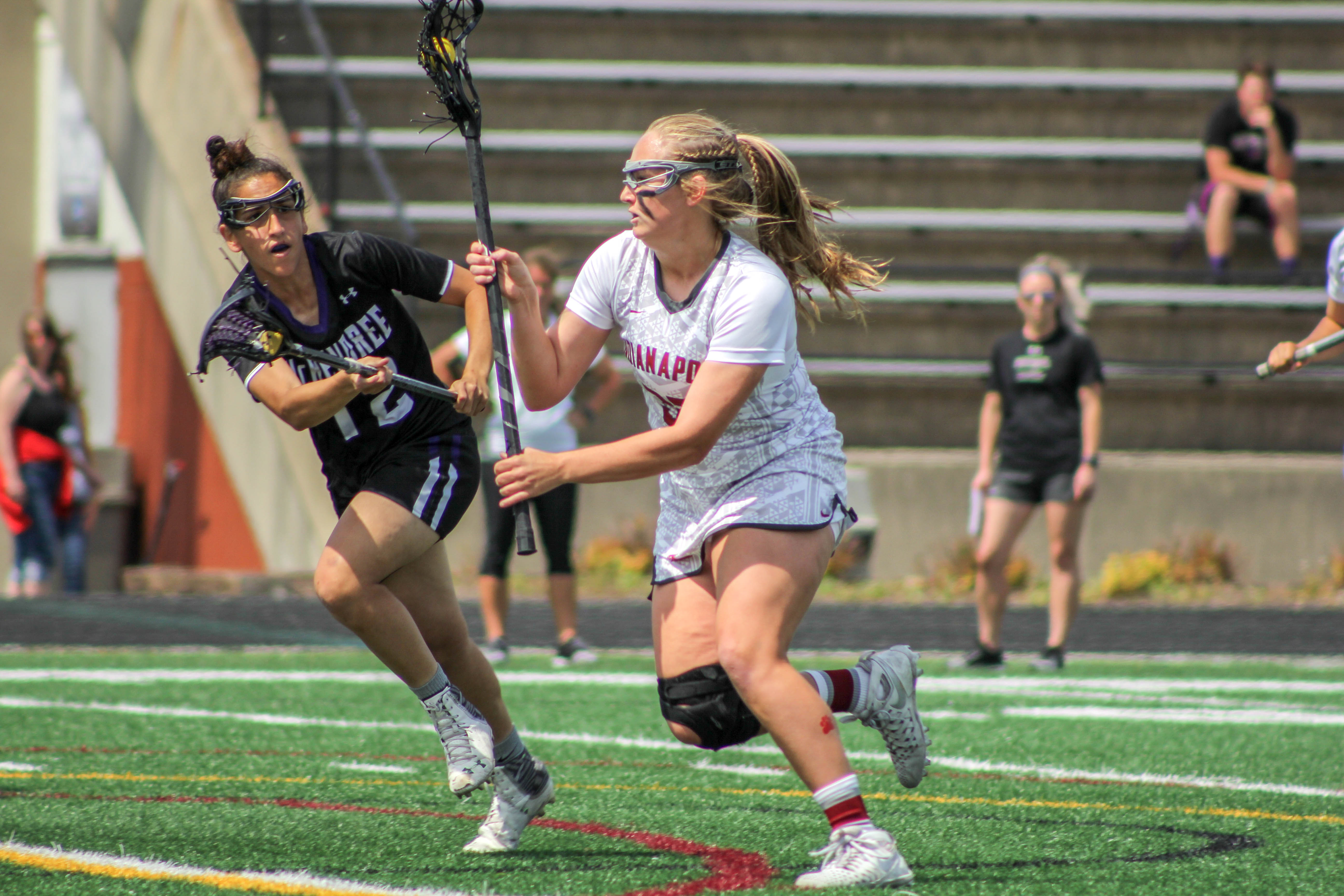 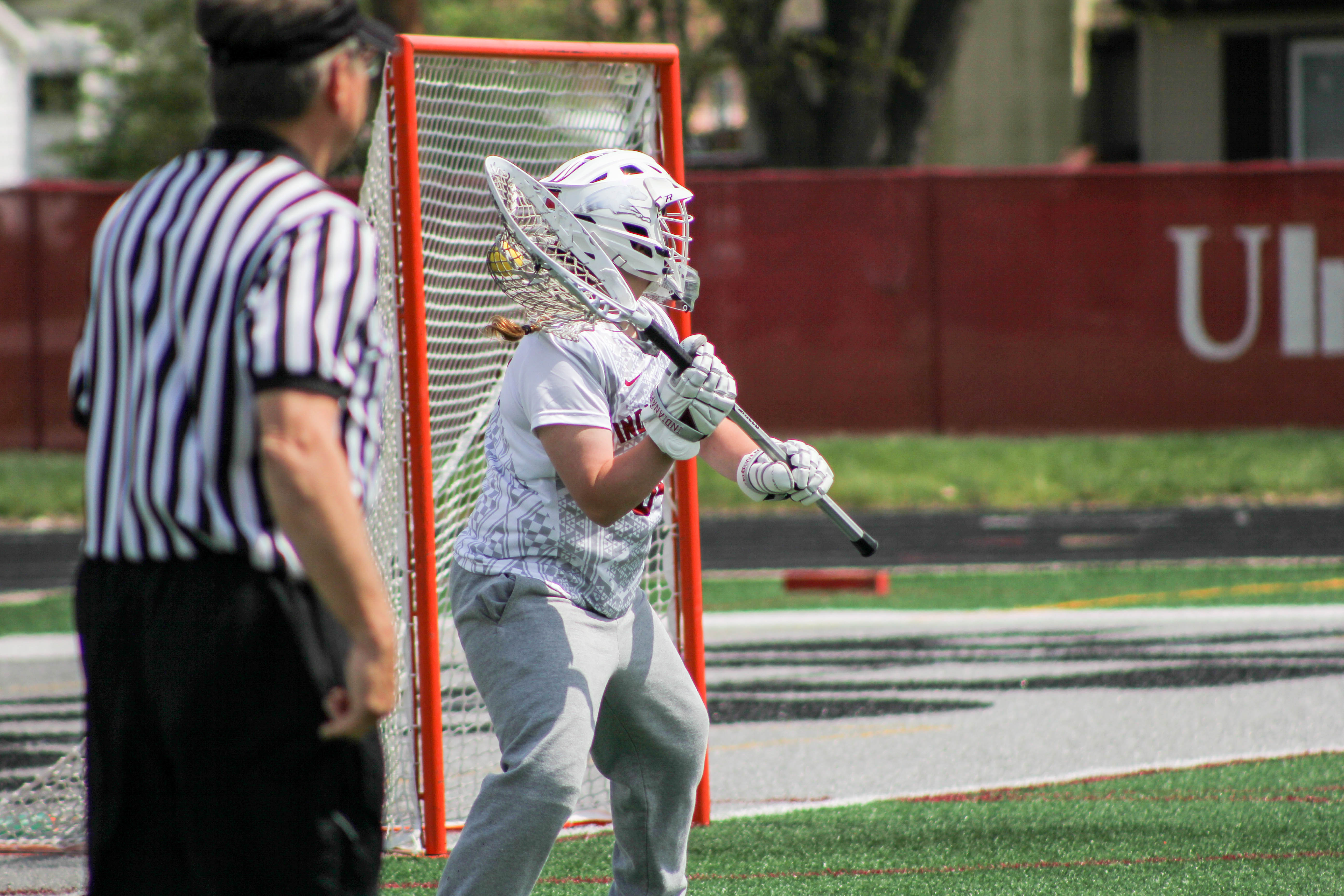 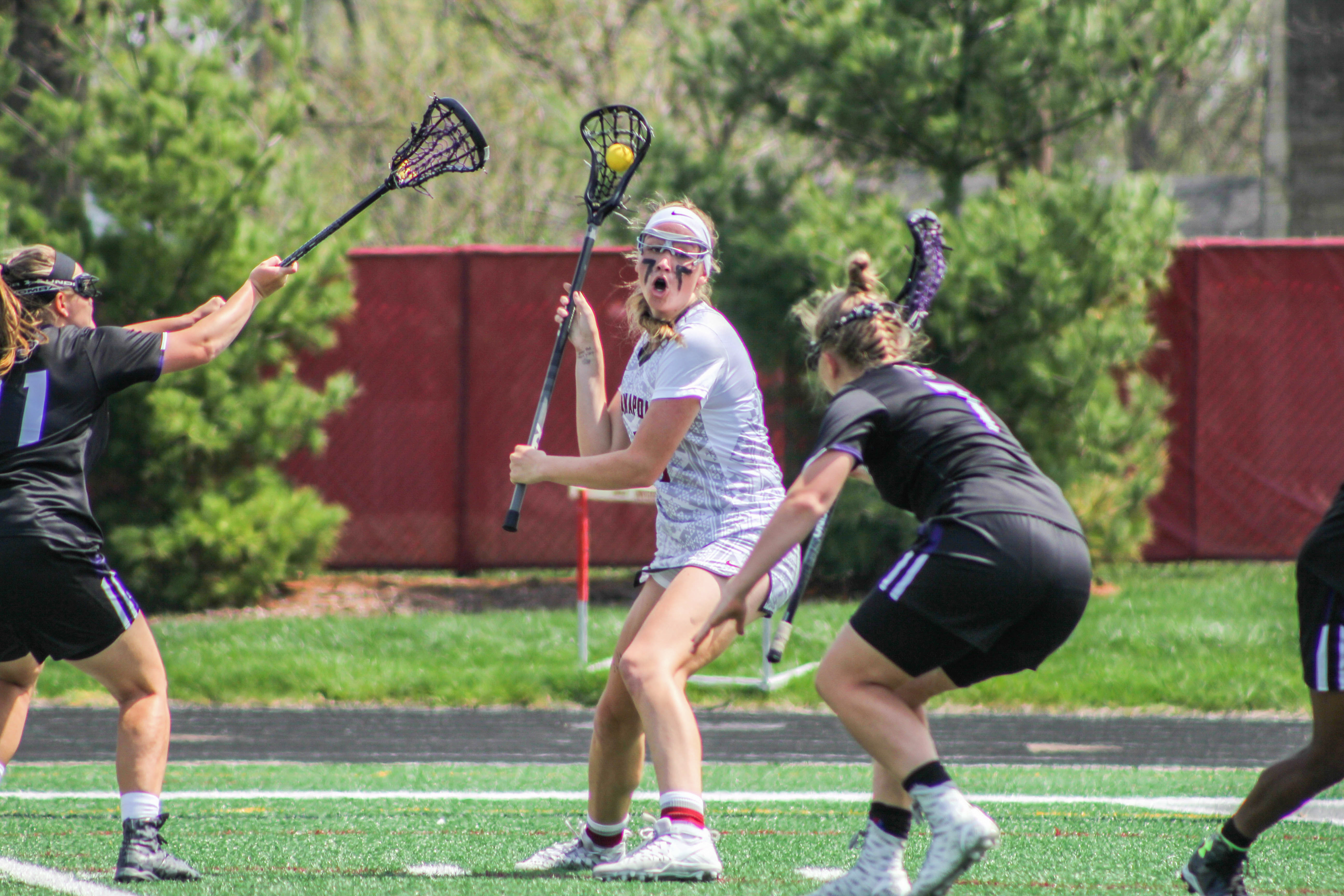 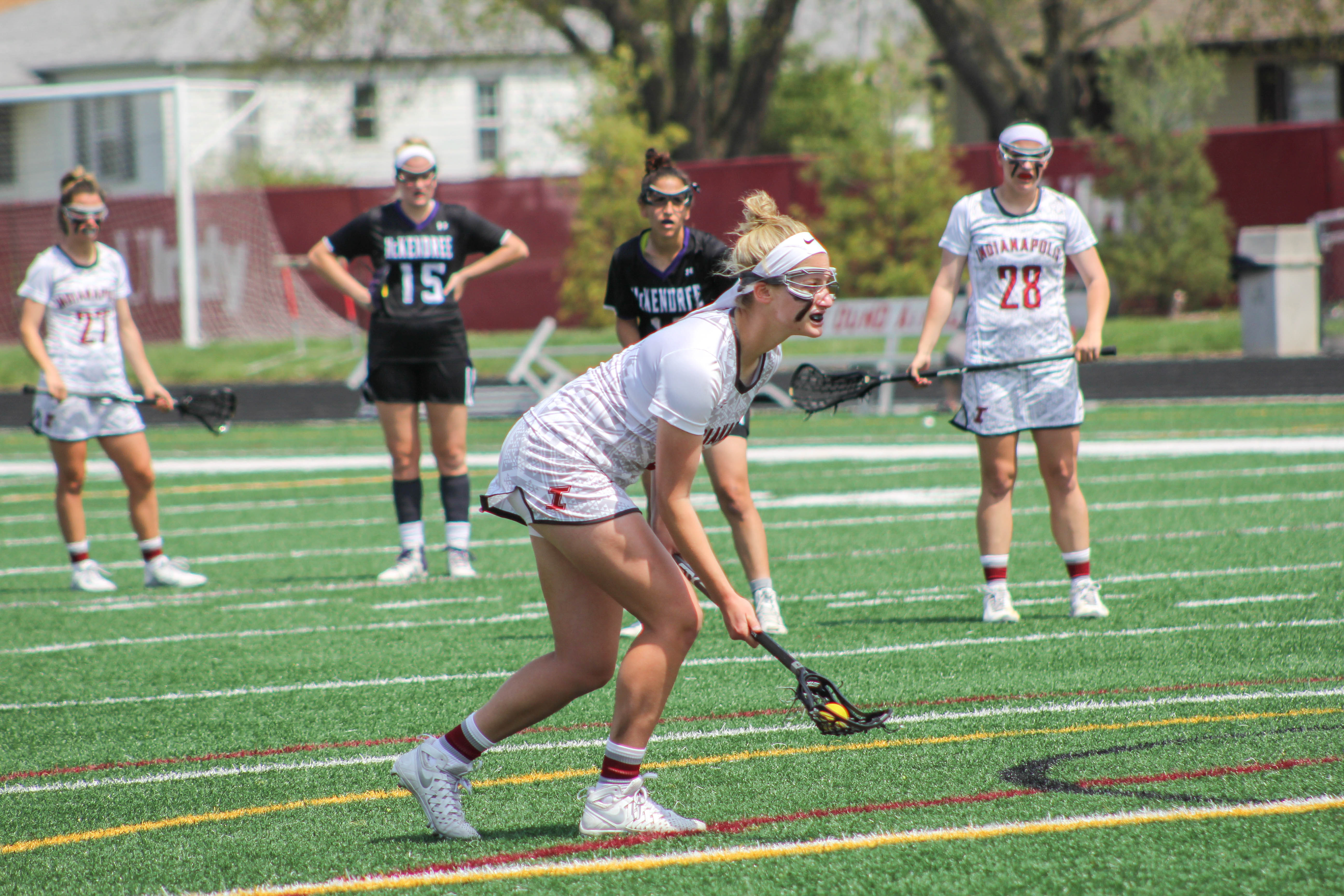 With a record of 10-4 surpassing last year’s six wins, Head Women’s Lacrosse Coach Jillian Howley is excited to see all of the growth made on the field and in the dedication by the University of Indianapolis women’s lacrosse team.

“One [accomplishment] is surpassing last year’s win total,” Howley said. “Last year, we won [eight] games, and now we’ve won eight so far. Hopefully, we’ll be able to add a couple more on top of that. I think if we do win a few games, we could finish over 500 which would be a huge accomplishment from this program. It’s been a really exciting year. I would say the growth we’ve made from last year to this year is massive.”

The women recorded a significant 26-3 win over the Northern Michigan University Wildcats on April 23. They started off the day recording four goals in a row in less than three minutes. The team expanded on their lead in the first half, recording 11 more goals and allowing only two. The second half followed suit, and the Hounds allowed one more goal from the Wildcats and took 11 of their own, winning 26-3.

Senior attack Chalane Morrison scored two goals and provided one assist, leaving her with one more goal to score to match her team-best 44 goals during the 2016 season.

The previous weekend the Hounds fell to the McKendree University Bearcats by two goals, 12-10, on April 15. Despite the loss, Howley said she finds positivity in the loss and find encouragement with other losses the team has suffered this season.

“The fact that we lost to Lindenwood, Grand Valley and McKendree, all relatively close, obviously we were upset about that. But on the bright side, you have to look at it as actually a good thing. Last year, we weren’t even in those games. So now that we are able to look back and think, ‘Hey, if we didn’t make this mistake, or if we capitalized on their mistake here, we could’ve won.’ So the fact that these are the conversations we’re having, and that we’re disappointed with those losses is incredible, especially in just one year. We are just excited for the future of the program and hope to continue growing,” Howley said.

The Bearcats kicked off scoring with three back-to-back goals in just under a minute. Senior attack Chalane Morrison fired back with two goals of her own, followed by free position goals from freshman attack Grace Gunneson and redshirt freshman midfield Sarah Konecny  to take the only UIndy lead of the game, 4-3. The Bearcats scored one more goal to put them in the lead at the end of the half.

In the next half, Gunneson and Morrison led the team with four and two points, respectively. The Hounds fought to reclaim the lead again, tying the score four times before the Bearcats pulled ahead with the last two goals of the game. The Hounds fell 12-10. Sophomore goalie Lauren Granville recorded six saves on the day and Gunneson who scored a career high five goals.

As the semester comes to a close, with only two games left in the regular season, Howley said the team has come a long way and is looking to finish the year strong. The key being focus on and off the field.

“We’ve competed really well against the top teams in our program so now it’s just about trying to find a way to finish strong. Especially during the most challenging time of the year,” Howley said. “Obviously it’s coming down to the wire in their classes and it’s coming down to the wire in the season. So it’s finding that balance of not getting too overloaded in the classroom and staying focused. It’s been a really successful season so far but we still have a way to go.”

Morrison agreed that the focus needs to be there to continue the success.

“I think the big thing will be just staying focused, because we are getting down to the wire in classes,” Morrison said. “But I mean there are a really big couple of weekend coming up, so it would be really awesome to just win those [last games of the season] but it’s going to take everything we’ve got.”

Morrison also said that the team has really improved in it’s second season, and many of the women have stepped up their play. Finishing off her senior season, she is excited to see where the team is headed in the future.

“I’m really proud of all the girls who have stepped up this year,” Morrison said. “Especially because we are still really young still. But they’re playing as if they aren’t, which is really nice to see. I’m really excited to see where they are going in the coming years.”

Howley commented the first season in 2016 was a rough start with so many young athletes. The team lacked leadership, which is typically brought by older members of the team such as juniors and seniors. After a year dedicated to developing the team, Howley said she is proud of how the team has grown and is looking toward even more development in the future.

“It’s kind of night and day,” she said. “And we still have a long way to go. But they are definitely a lot more self disciplined. We are still at times lacking leadership in areas, just someone stepping up and taking charge. I really want the culture to continue in the direction we are headed, very lacrosse focused.”

The Hounds next host the Tiffin University Dragons at Key Stadium on April 28. The game is set to start at 4 p.m.