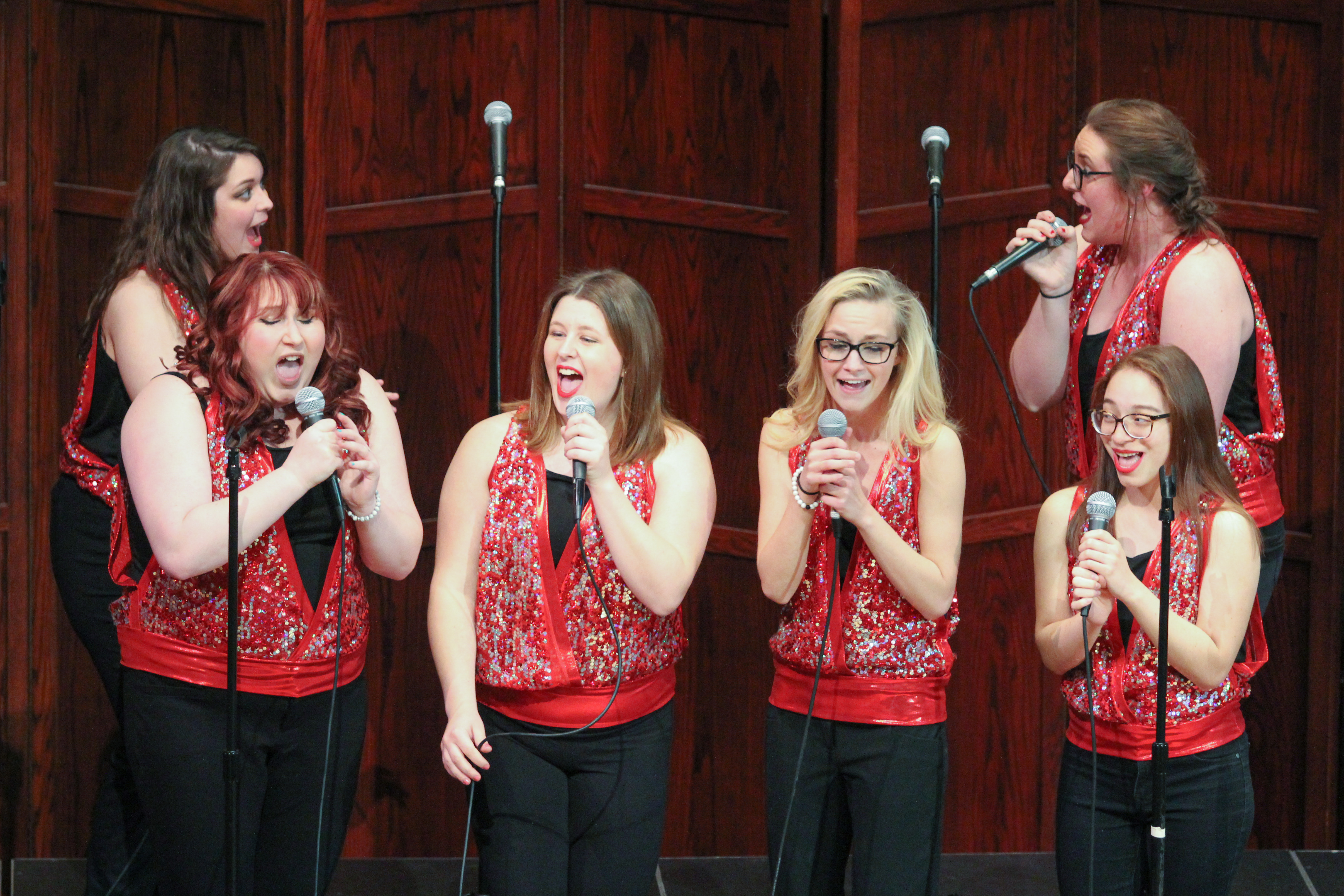 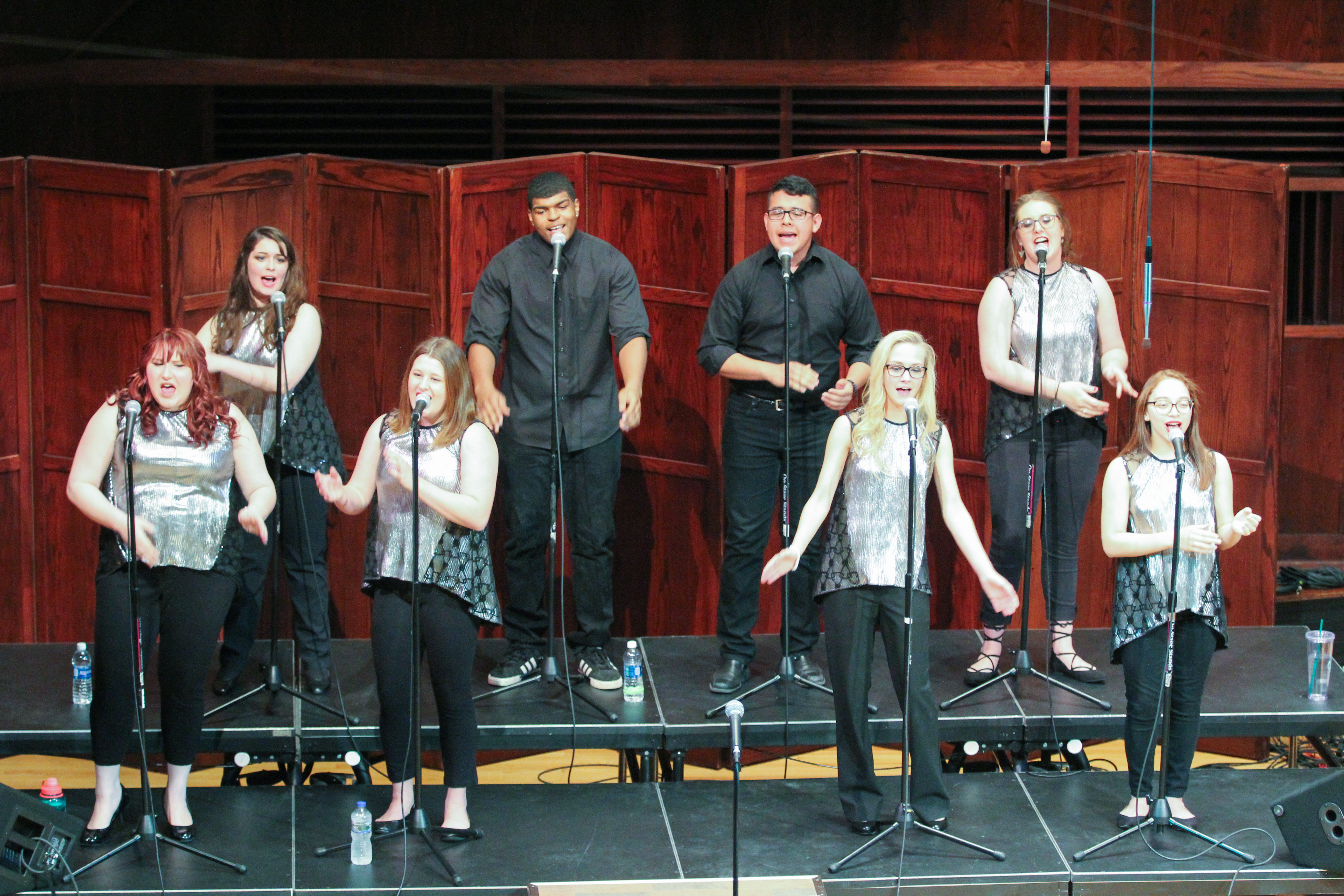 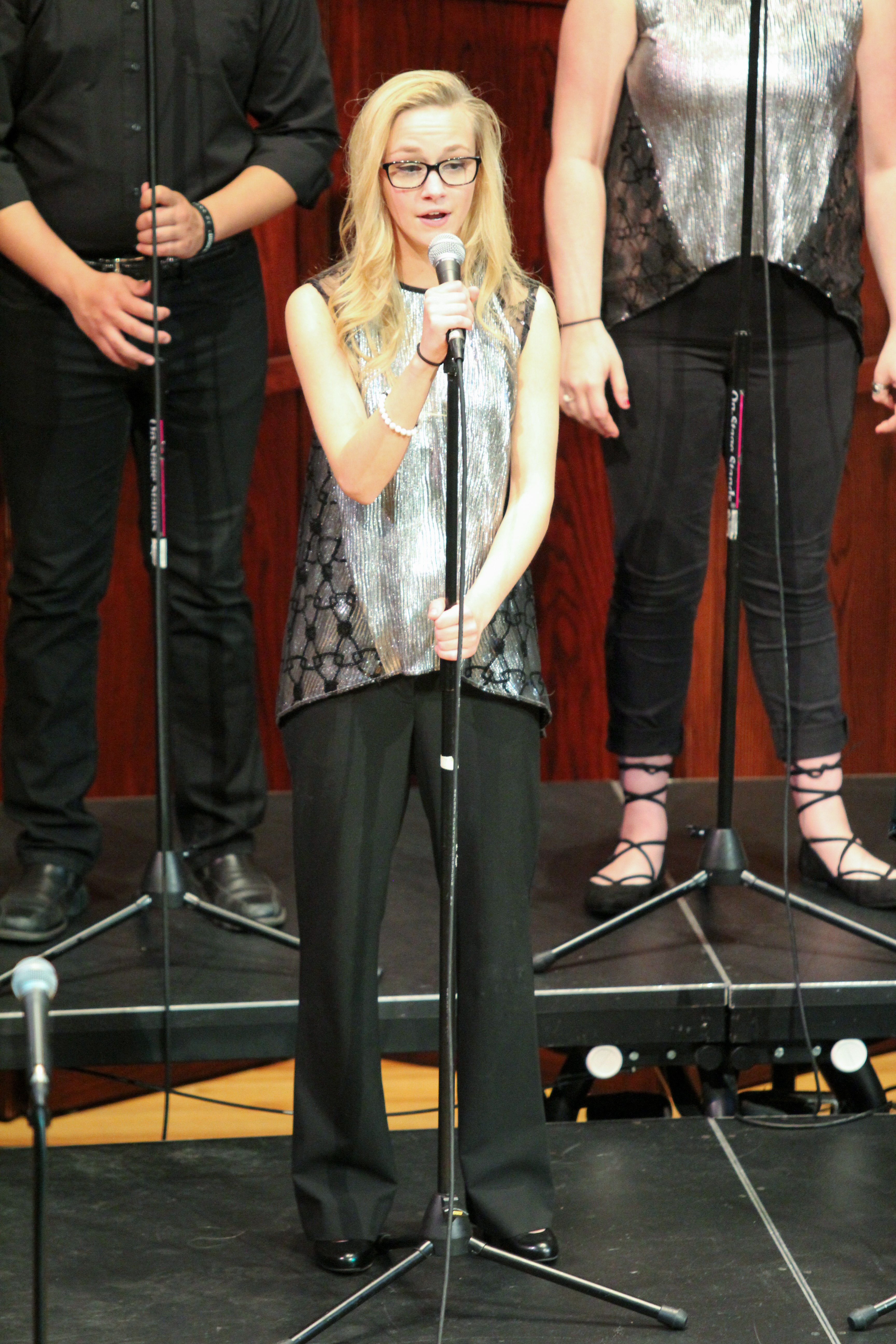 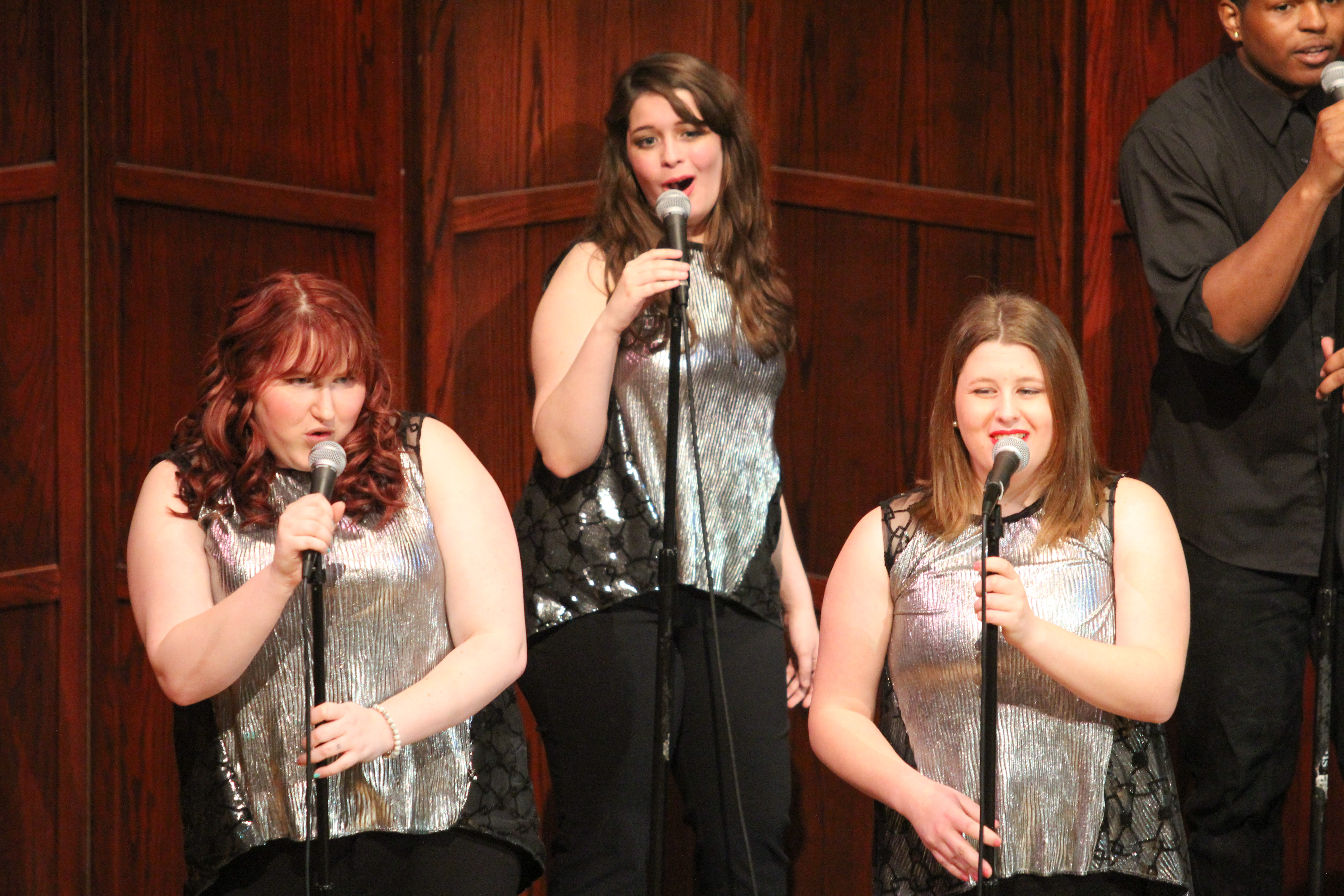 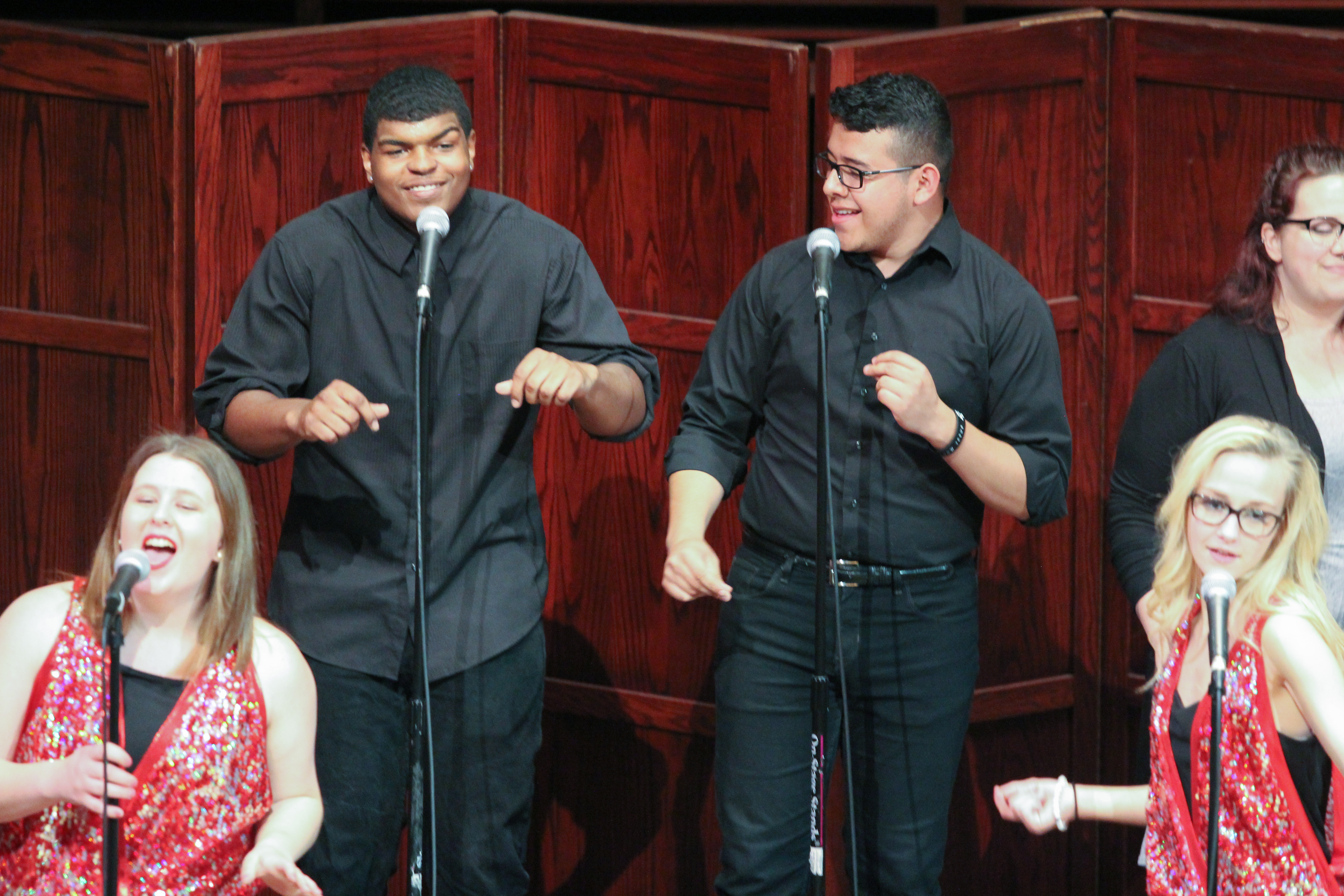 “Here you kind of get to sing fun music and the crowd seems to respond more to this, so I definitely think it is its own variety of something good and something different for sure,” said junior music education major Samantha Burkey after her performance as a vocalist in Crimson Express on April 19 at 7:30 p.m. in the Ruth Lilly Performance Hall.

The Crimson Express Jazz and Pop vocal ensemble performed pieces such as “I Can See Clearly Now,” originally by Johnny Nash; “Lately,” by Stevie Wonder; “Sweet Georgia Brown,” by Louis Armstrong; and “Seasons of Love,” from the Broadway musical “Rent.”

The musical genre of Crimson Express differs from Concert Choir, Schola and all other instrumental ensembles that are not jazz. According to Burkey, the music in Crimson Express concerts attracts an audience that prefer the music that pops.

“When singing in concert choir, it’s just a totally different mood, and there is a difference in the techniques,” Burkey said. “When I’m singing classically I really have to focus on my vowel shapes and the kind of sound I am creating to blend with everyone else. And with Crimson Express, the music we do in there, it’s a lot different and we get to kind of add more modern vocal techniques [such as] slides and stuff like that, and the blending is not so much an issue. So we really get to let loose a little bit, which I think really helps us to feel it.

The songs gave the performers the freedom to let loose and add their own physical movements to emphasize their singing and overall stage presence.

“I feel like I perform better when I am physically into it. Anybody can sing a song. It’s like when you put in the extra effort and really put yourself into the music, it [becomes] a really good performance,” said freshman music education major Anna Miller.

Work put in throughout the second academic semester, on Mondays and Wednesdays from 4:30 p.m. to 5:50 p.m., helped the vocalists and instrumentalists prepare for the concert.

“I felt like it [the concert] was really good. This was my last one because I’m student teaching next semester, so I can’t be in it [Crimson Express] next year, so it’s pretty sentimental to me no matter what. We have times [in our rehearsals] where we do our sound checks, and it’s a really new environment, especially for new freshmen who are like, ‘What’s going on?’ We then have really rough rehearsals, but this year it was smooth-sailing all the way up,” Burkey said. “And I think we gave a really strong performance. I really hope for our next one, we can have more people come. Yeah, I would definitely like to have more people here so we can have a higher energy, because it takes the audience a little while to get out of their shell, since they are used to the classical concerts.”

Burkey explained that during concerts like these, the audience members can sometimes take time to get into the music and reciprocate what the performers give them. She said the song “Sweet Georgia Brown” was a song that helped lead the audience in that direction, with the help of Crimson Express director and Associate Professor of Music Peter Schmutte, but the song “Mister Sandman,” the ladies’ number, took the audience by storm.

The ladies began “Mister Sandman” in a huddle on stage, interacting with the audience and acting cute. Once Schmutte realized how cute the number really was, he told them that the performance was too sweet, and he wanted them to really let loose. Schmutte began a new number first with a beat, then some riffs, and soon, the ladies transformed into women with the piece “I’m A Woman,” again surprising the audience.

“Once the audience gets into it, we can start interacting with them and find a person, look at them and sing to them and you know you see them really getting into it and that’s just really exciting,” said Miller.

Despite Crimson Express consisting of six women and three men, with one man missing, they believed there was a vocal balance in the ensemble.

“It was kind of scary at first,  [I’m] not going to lie. We were thinking, ‘We have to rearrange who’s singing what.’ I think that for what we did and [with] the size of the group, I feel like it worked really well. The guys were awesome, and they gave 200 percent. They didn’t really have a choice,” Burkey said. “We were really nervous, but it worked out really well. And I think that the guys were energetic enough to cover for their missing ensemble mate there,” Burkey said.

The performance consisted of group pieces with solos in them and solo songs as well.

“I was really nervous for mine because, you know, this was my first one. And I’ve come to them before, and I’ve seen people do well. I feel like everyone held their own tonight and did really well on their solos,” Miller said.

Towards the end, Schmutte welcomed any alums in the audience to sing the encore piece, “Oh, Happy Day,” with the ensemble.

“I’m very sad because this is my last semester, because I’m just kind of finding my style singing in this kind of ensemble so I’ll definitely come back and sing that encore,” Burkey said.