Women’s lacrosse looking up after loss to GVSU 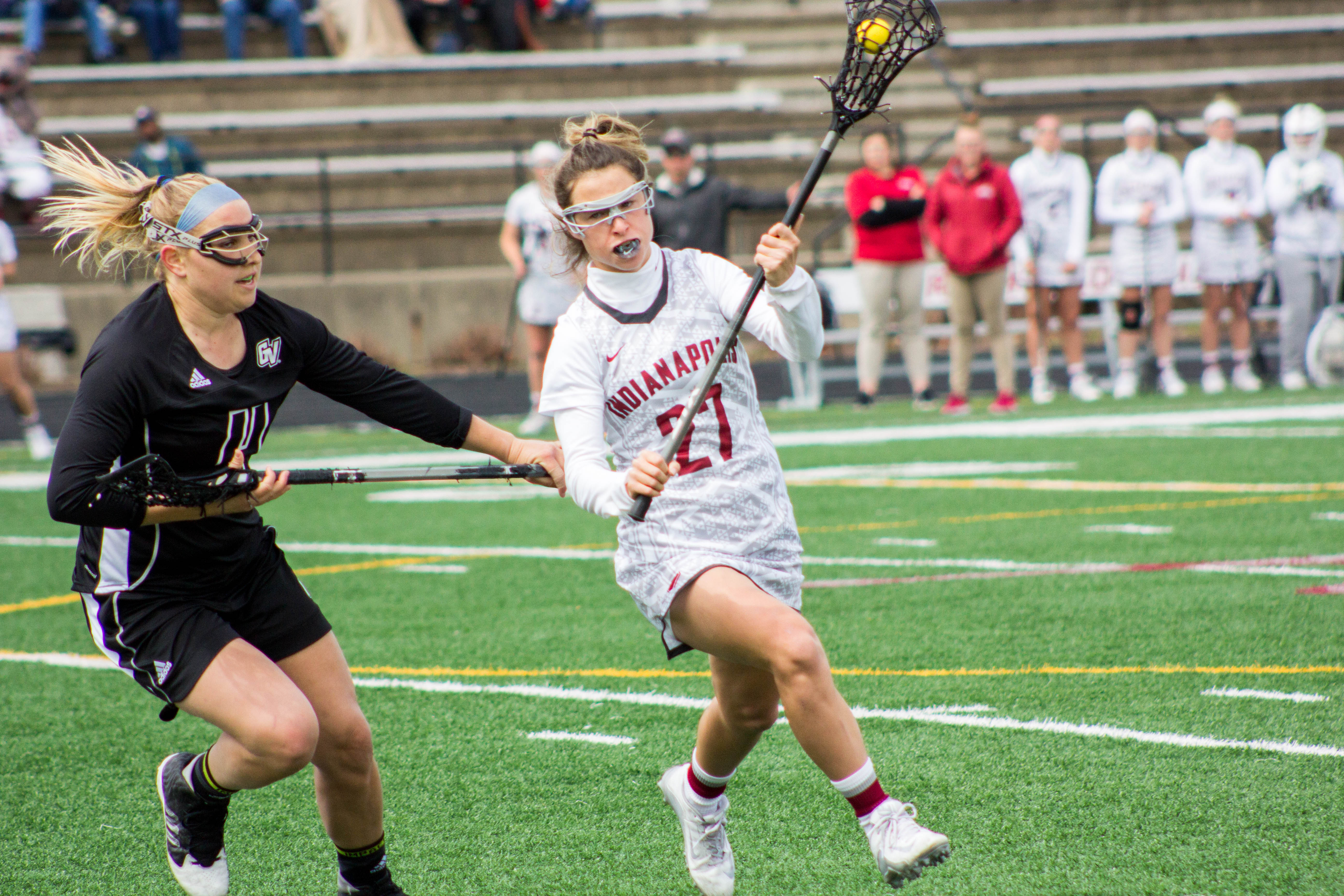 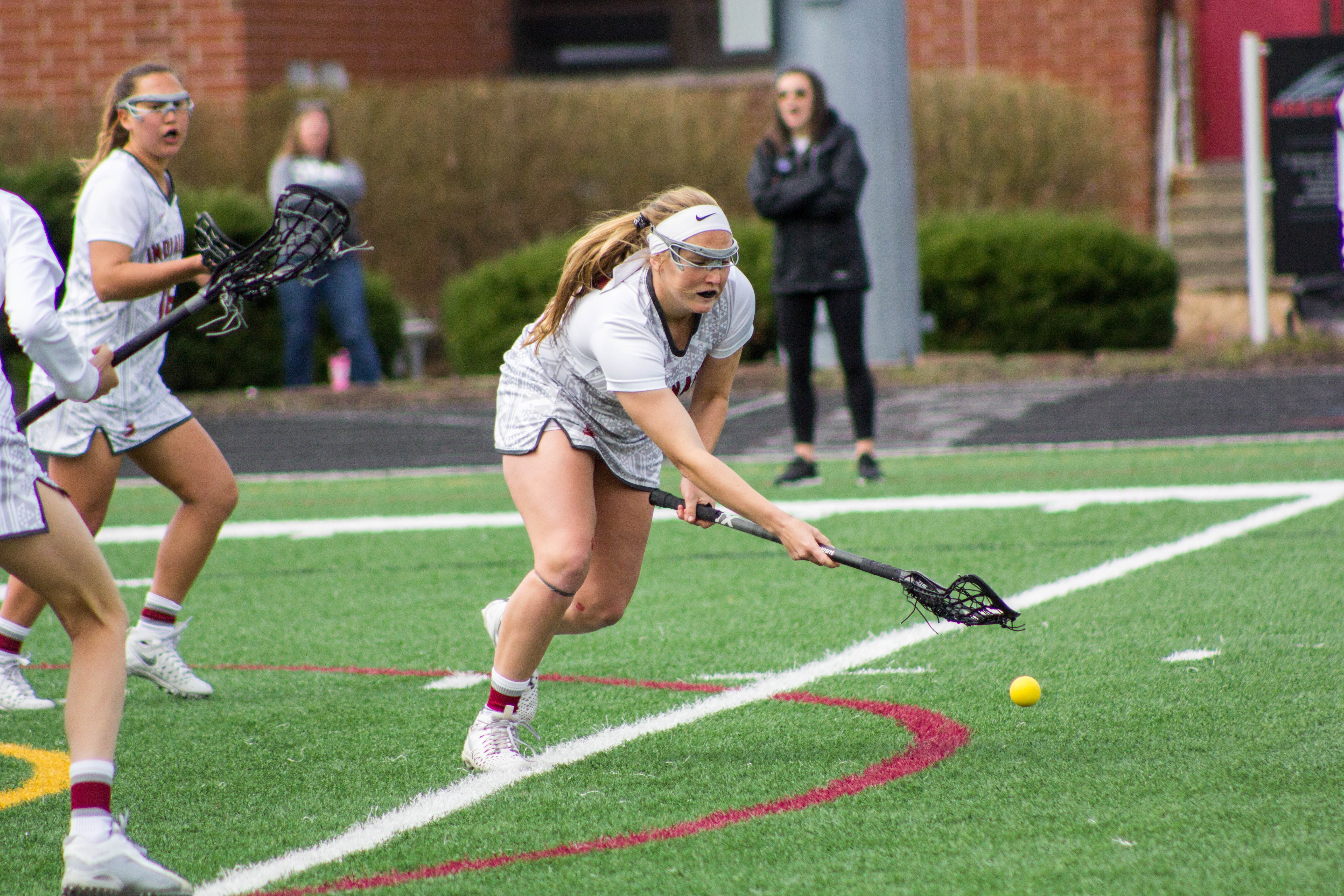 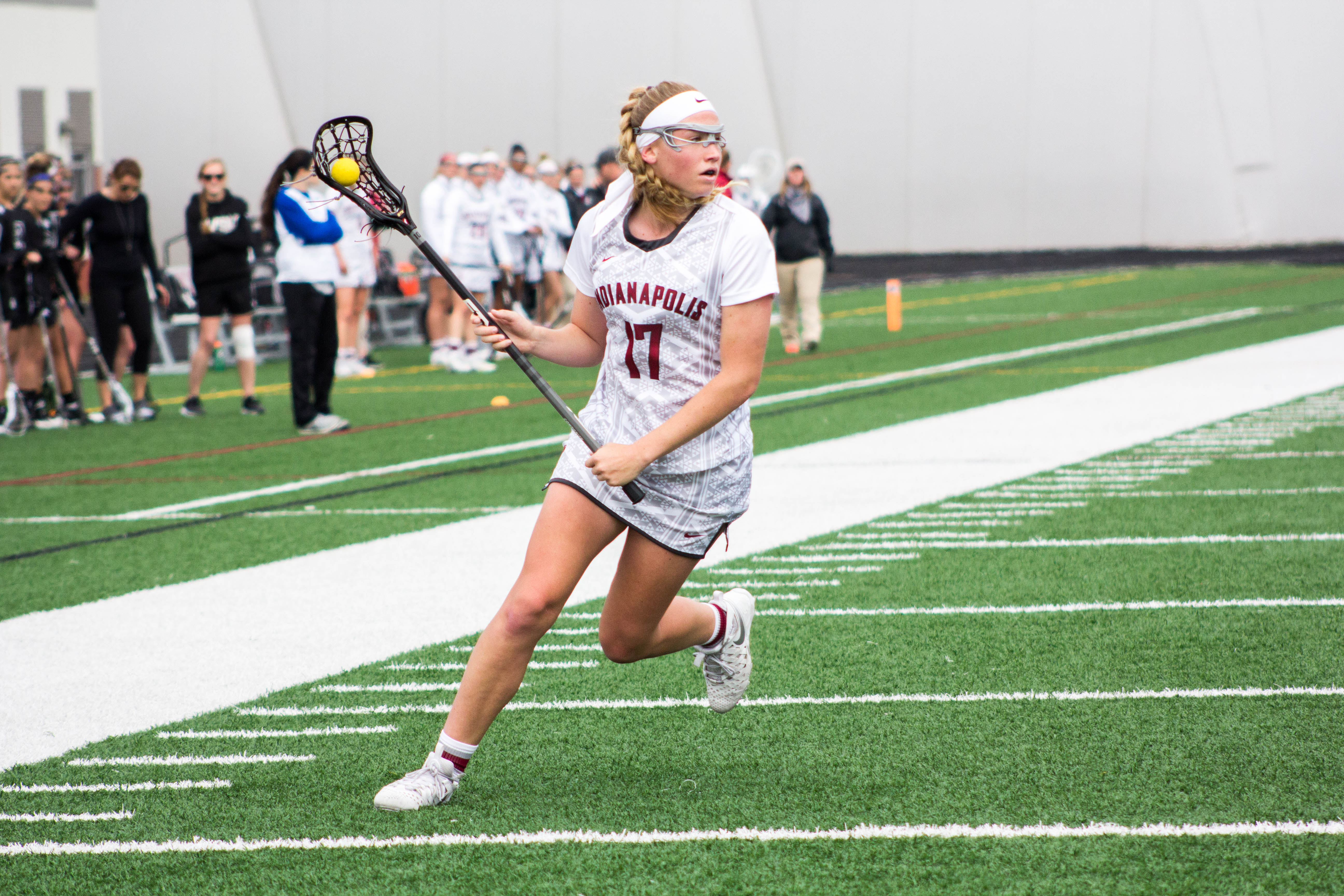 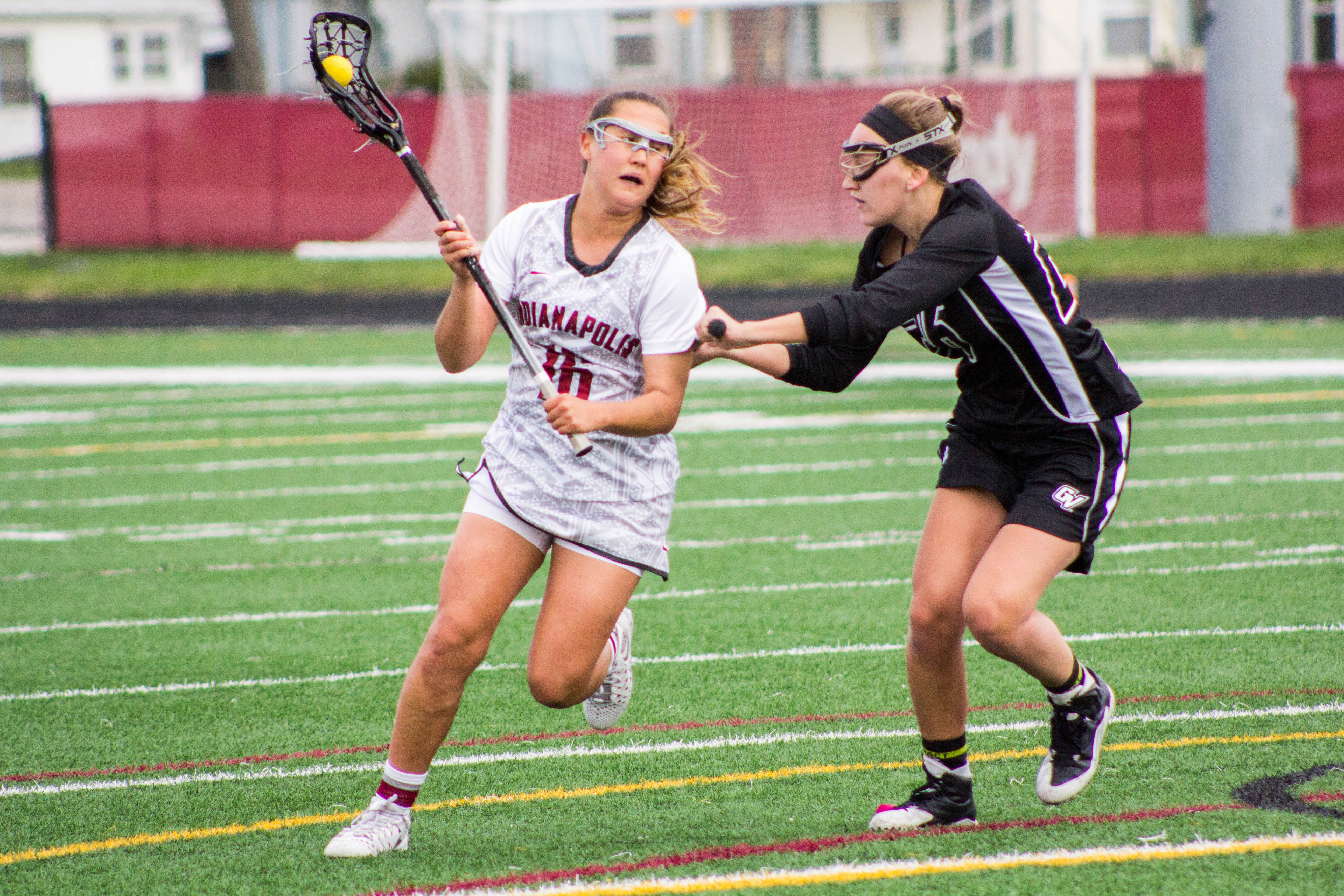 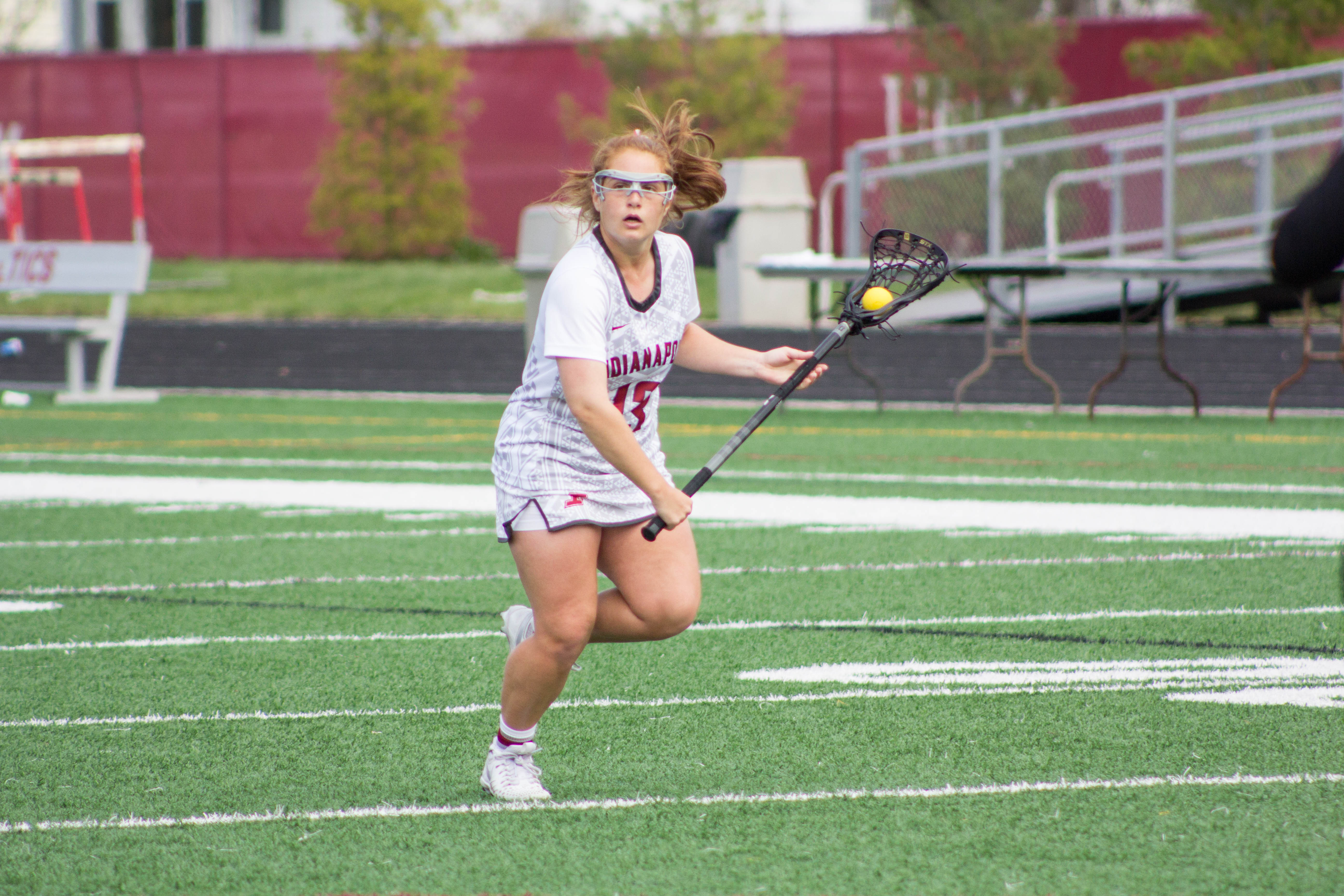 Despite the University of Indianapolis women’s lacrosse team’s loss to the Grand Valley State University Lakers on April 1, in the first GLIAC matchup of the season Head Women’s Lacrosse Coach Jillian Howley still believes the team is at a good level and hopes to instill confidence in all of her players.

“We kept emphasizing all week that that’s the level we want to be at. The biggest thing was we wanted the girls to believe they could compete and that they could win the game. We want a winning mentality. We want to believe that we can win every game we go out to,” Howley said.

The Lakers led during the entire first half, despite work from senior attack Chalane Morrison, who scored three goals in the opening half. Two more Hounds scored, while allowing seven goals from the Lakers, ending the half 7-5.

In the second half the Hounds fought back with a five goal run to take the lead 8-11. The lead was short-lived because the Lakers had a run of their own, scoring seven more goals before the end of the game. The Hounds fell to the Lakers 15-11. Morrison led the scoring with five goals, followed by freshman midfield/attack Kailee King and junior attack Anna Rulapaugh, each with two goals.

The previous weekend, the women battled the No. 2 Lindenwood University Lions on March 26. The team jumped to an early lead, with Morrison scoring the first goal roughly eight minutes in. She was followed by a pair of back-to-back tallies by Rulapaugh, bringing the score to 3-0. The Lions responded with two of their own before Morrison added her second of the day with a behind-the-back shot. The Lions scored two more unanswered goals to tie the game at 4-4 going into the second half. Lindenwood took its first lead of the day about three minutes into the second half, but Morrison scored yet again to tie the score. The score remained 5-5 until halfway through the second half, when the Lions scored four unanswered goals and took the win 9-5. Contributions came from all over the field, starting with Morrison’s four points and freshman defender Riley McClure’s six ground balls and three caused turnovers.

Sophomore midfielder Hana Priddy worked to keep the draws even at 8-8, which she said is essential to getting possession, something in which she takes great pride.

“Even the girls on the restraining line play a big role in it, because I can push the ball over and they have a ground ball battle. [a] 50-50 ground ball with girl next to them,” Priddy said. “The attack is a huge part of the transition game and we constantly work in practice to get our attack more involved, because ultimately our attacks are the best ball handlers on the team.”

The Greyhound’s defense held Lindenwood to nine goals, the Lions’ lowest goal total all year. Howley said that the UIndy team’s defense is currently one of its strong points.

“I feel like our defense right now is more focused, more locked in, and just go[es] to work everyday,” she said.

Next, the women travel to Painesville, Ohio to battle the Lake Erie College Storm for the Greyhounds’ second GLIAC game of the season. The game is set to begin at 7 p.m. on April 7.

Healthcare up in the air