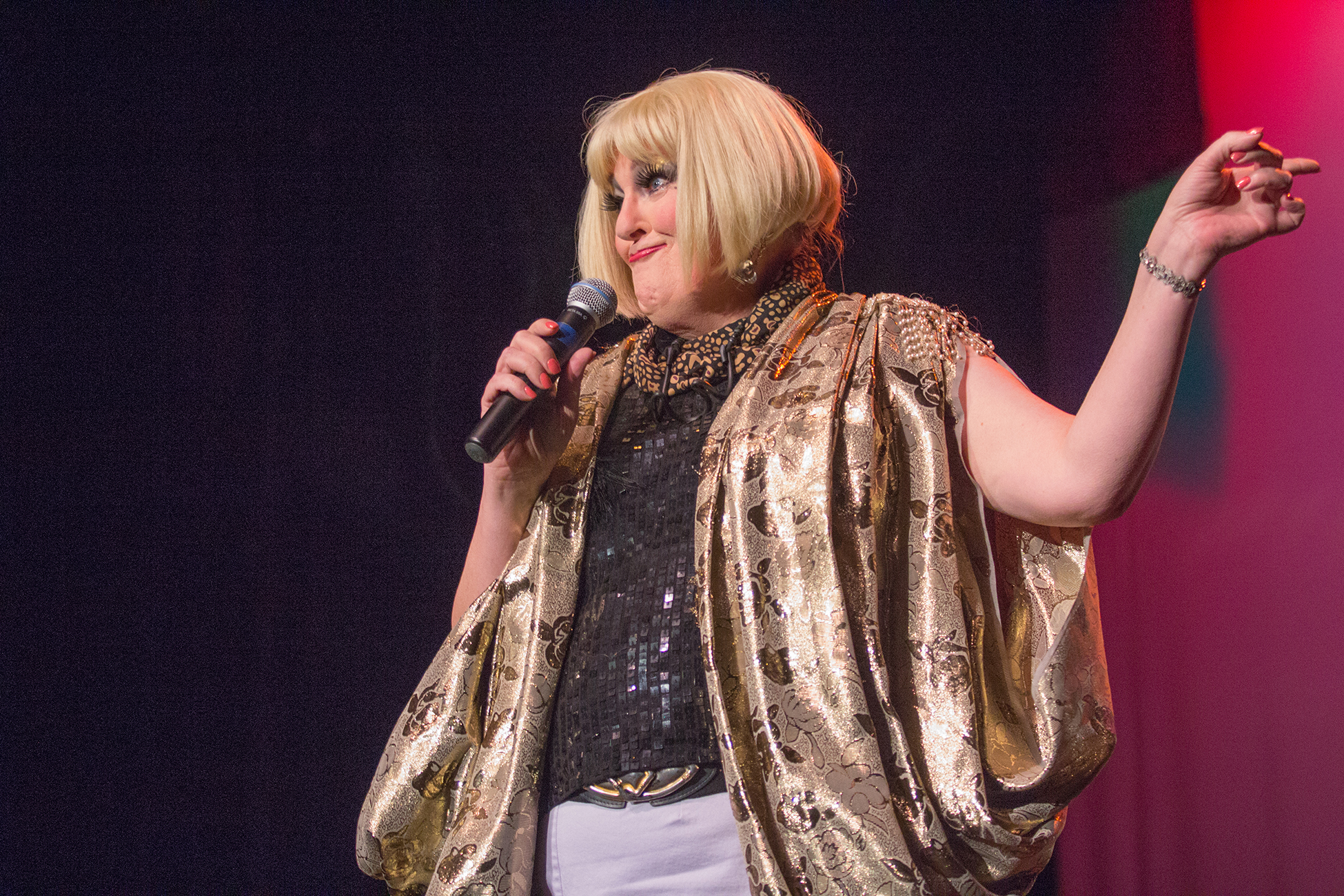 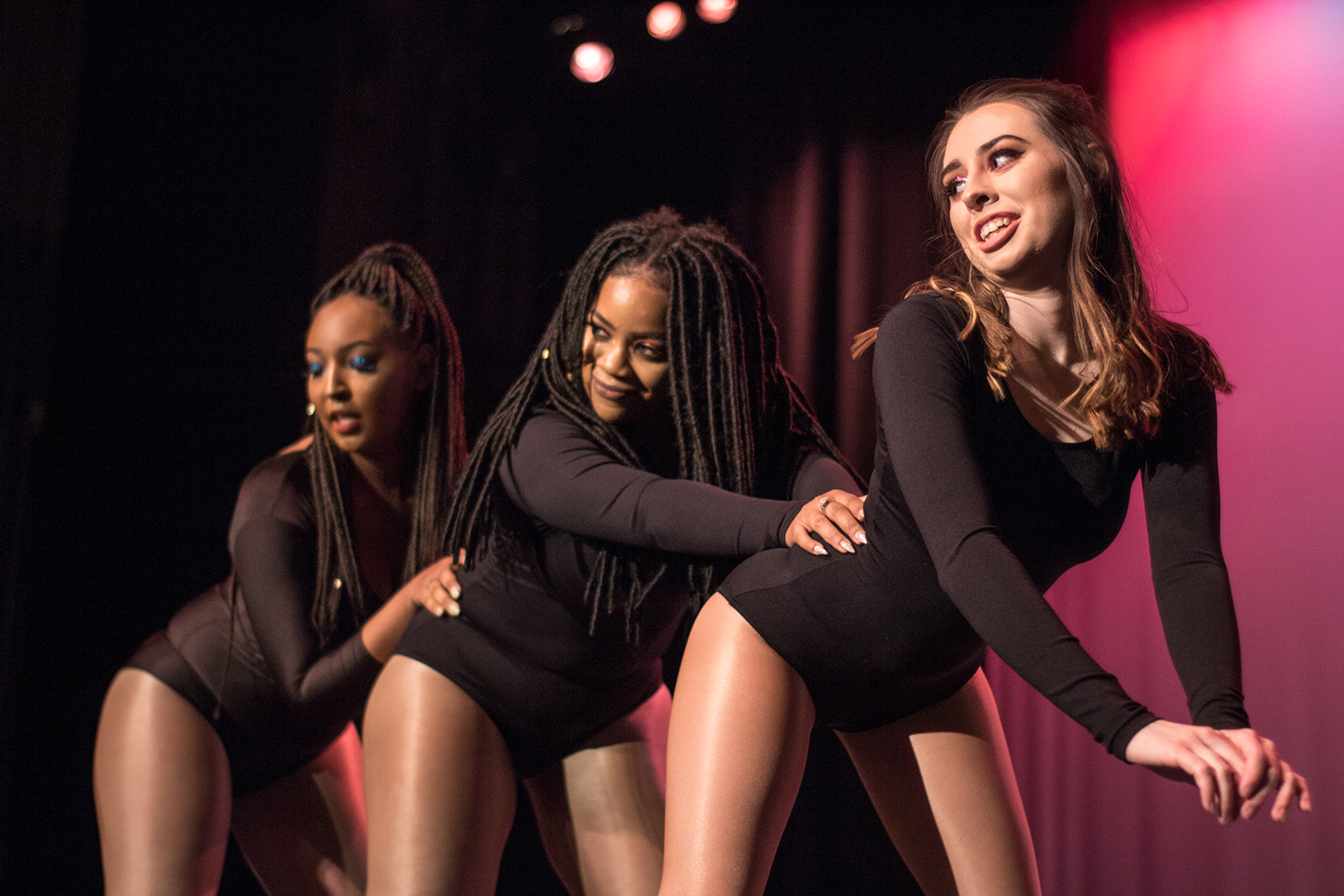 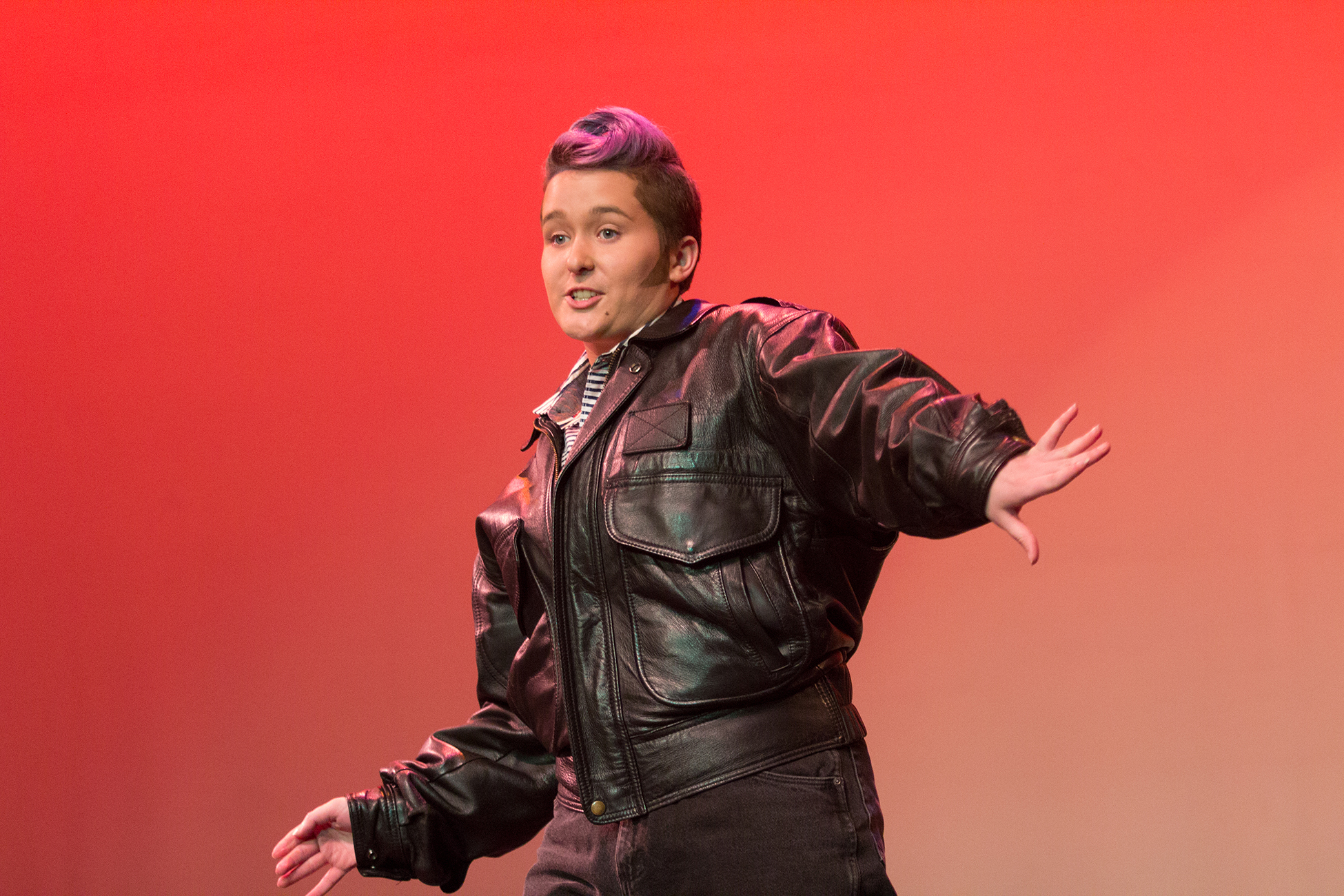 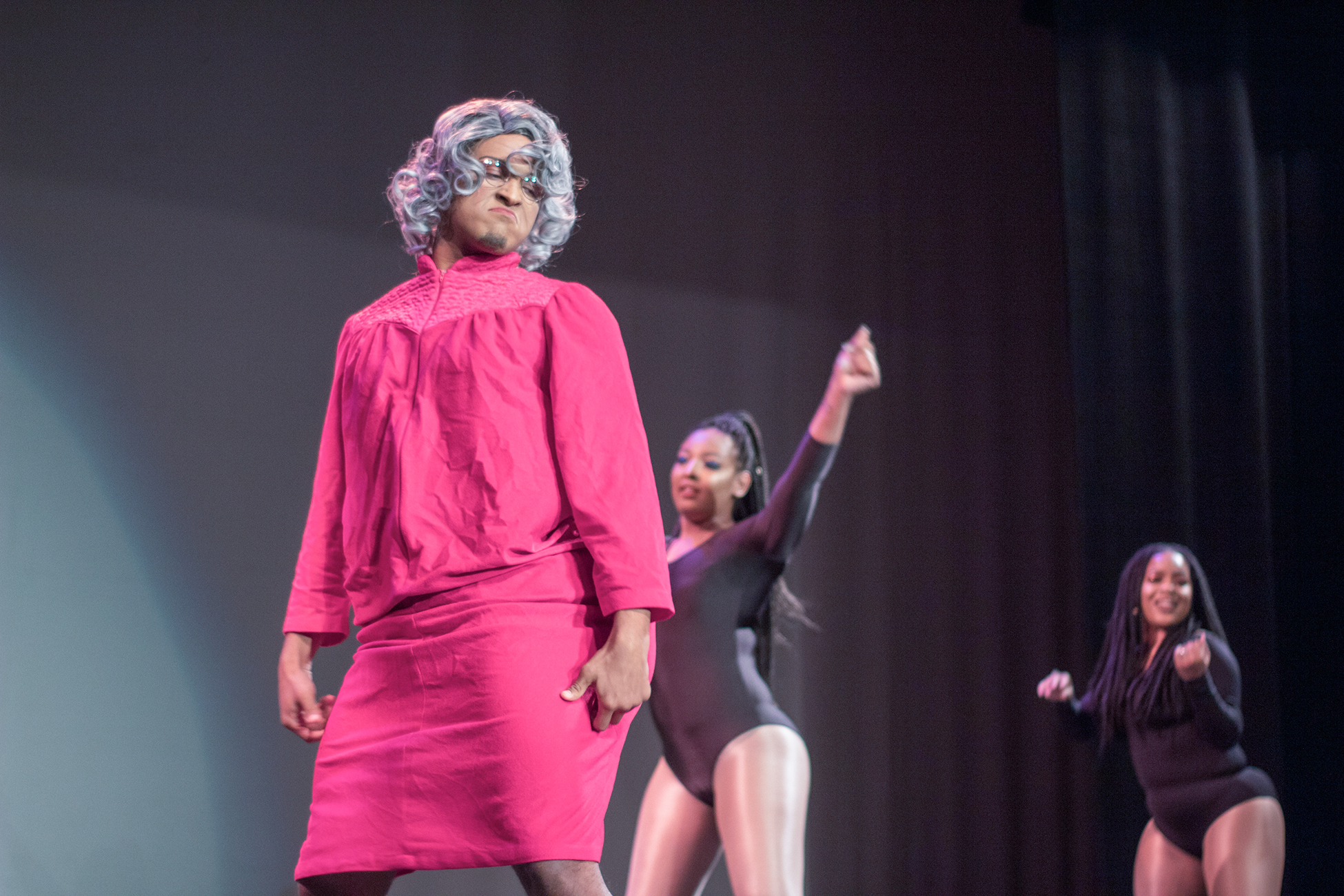 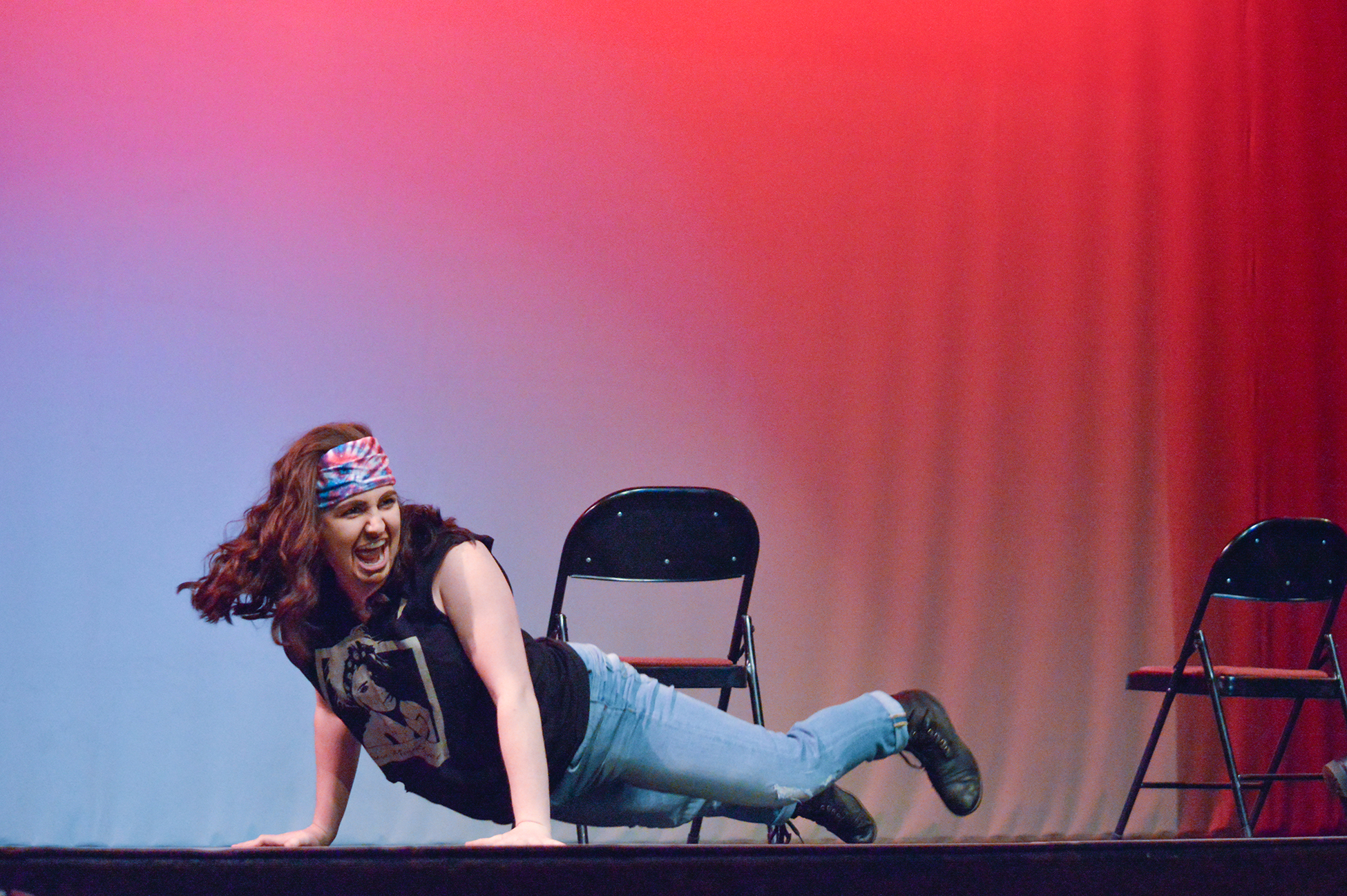 The purpose of the UIndy Drag Show is to have fun, according to Director of University Events and Staff Adviser for UIndy PRIDE Jeffrey Barnes. Barnes has been involved with UIndy PRIDE for about 11 years, serving as adviser for two separate periods, and has even performed in prior drag shows.

“Drag is a really big part of the LGBTQ community for some people, and for some it is not at all,” Barnes said. “For some people it doesn’t, to them, represent what they are; and for some, it really does. It’s a way to express yourself differently than you might normally. And historically, it has a place in our culture history as well.”

The Drag Show kicked off with a performance by Envy Debeauté, a drag queen from Bloomington, Ind., and one of the judges. She performed a “Selfie Mix,” which featured The Chainsmokers’ song, “#SELFIE,” before taking her seat in the front row to judge the other performances. UIndy PRIDE President Austin Elliott and APO President Lizz Krull welcomed the audience and presented the other judges before turning over the show to emcee Stevoncé.

The first act included performances of “How Will I Know,” by Shaquanda Thunderpuss; a “Fierce Medley,” by the Slayoncés, featuring Buttdea; “Tears,” by Blair St. Clair; “The Stroke,” by a group called Sir Plus, made up of two drag kings; “Dear Mr. President,” by Pri Mary and “Reflection,” by Fifth HarMANy. It also featured a magic performance by Andrea Merlyn, “The Queen of Magic” and UIndy Class of 1975.

BoyGorge kicked off the second act with a performance of “Hush Hush, Hush Hush,” and was followed by drag king Mitch Moore’s performance of “Jailhouse Rock.”  Then Blair St. Clair took the stage again to perform her “Raining Men Mix.” Other performances included Miraja Monet and the Dreamettes, who threw it back to the early 2000s by performing “What Dreams Are Made Of” from “Lizzie McGuire;” “Telephone,” by Emily Dick’n’some; a “Booty Poppin’ Mashup,” by #TwerkTeam; “Side to Side,”  by Areola Grande and a Lady Gaga medley from Stevoncé.

Sophomore visual communication design major and one half of Sir Plus Olivia Moor said that Areola Grande and Pri Mary’s performances were her favorites of the evening.

“I thought Areola Grande’s performance was stunning because of the sheer number of people involved! I could never imagine coordinating a number that detailed with that many people,” Moor said. “Pri Mary’s performance stood out to me as well, because she was the definition of the word ‘fearless’ on that stage. She took something she believed and made an amazing piece of art out of it.”

Throughout the show,  audience members tipped the drag queens and kings while they performed. All the money went to the Indiana Youth Group, a local LGBTQ+ youth center,  according to the program and Barnes.

“The drag show has always been a charity event,” Barnes said. “Previously it [the donations] went to Broadway Cares: Equity Fights AIDS, and the past couple of years, it’s been going to Indiana Youth Group.  IYG is a local organization. I think that’s part of the reason they [the students] chose that. It also benefits youth who are maybe struggling with their identity or coming to terms with their identity.”

To conclude the show, awards were presented. Miraja Monet and the Dreamettes won Best Queen with Pri Mary as first runner-up, while Sir Plus took home the title of Best King.

This was Moor’s first time performing in a drag show. She and her partner, Hannah Clifton, an Indiana University-Purdue University Indianapolis student, spent about 25 hours over the two weeks before the show putting together and practicing their performance,  Moor said. She felt that performing in the UIndy Drag Show was the perfect way to get into drag.

“Ever since I started getting more involved with the LGBTQ+ community, drag has been something that has fascinated me. I love the theatrics and the characters people get into, and the costumes are always so impressive,” she said. “I’ve never performed before, and I know the drag show here at school is one of the most supportive environments, so I thought this would be the perfect way to dive into drag.”

In addition to performing, Moor, who is the digital media executive for UIndy PRIDE, spent 20-30 hours designing flyers for the show and creating a promotional video, she said.

Moor was not the only student working to plan and promote the show. Other students from both UIndy PRIDE and APO worked together to choose a date and location for the show, recruit students, choose judges, spread the word and run rehearsals and the show itself, Barnes said.

Moor said that one of the goals of her performance was to bring awareness to drag kings.

“I wanted to show that drag kings exist,” Moor said. “Most people aren’t familiar with the term or the subculture because drag queens get more of the spotlight, but there’s no reason women can’t be part of this incredible world.”

In addition to marking the 11th year of the drag show, 2017 is also the 20th anniversary of UIndy PRIDE being a Registered Student Organization on campus. Barnes said that UIndy PRIDE hosted a reception prior to the banquet for students, faculty and alumni to celebrate. Moor was not able to attend but said that she is grateful for UIndy PRIDE having a place among the UIndy community.

“I am so proud to be part of a school that is so supportive of people who are used to being labeled as different and makes it a priority to give them a place to call their home,” Moor said. “I cannot wait to see what PRIDE does in the years to come.”