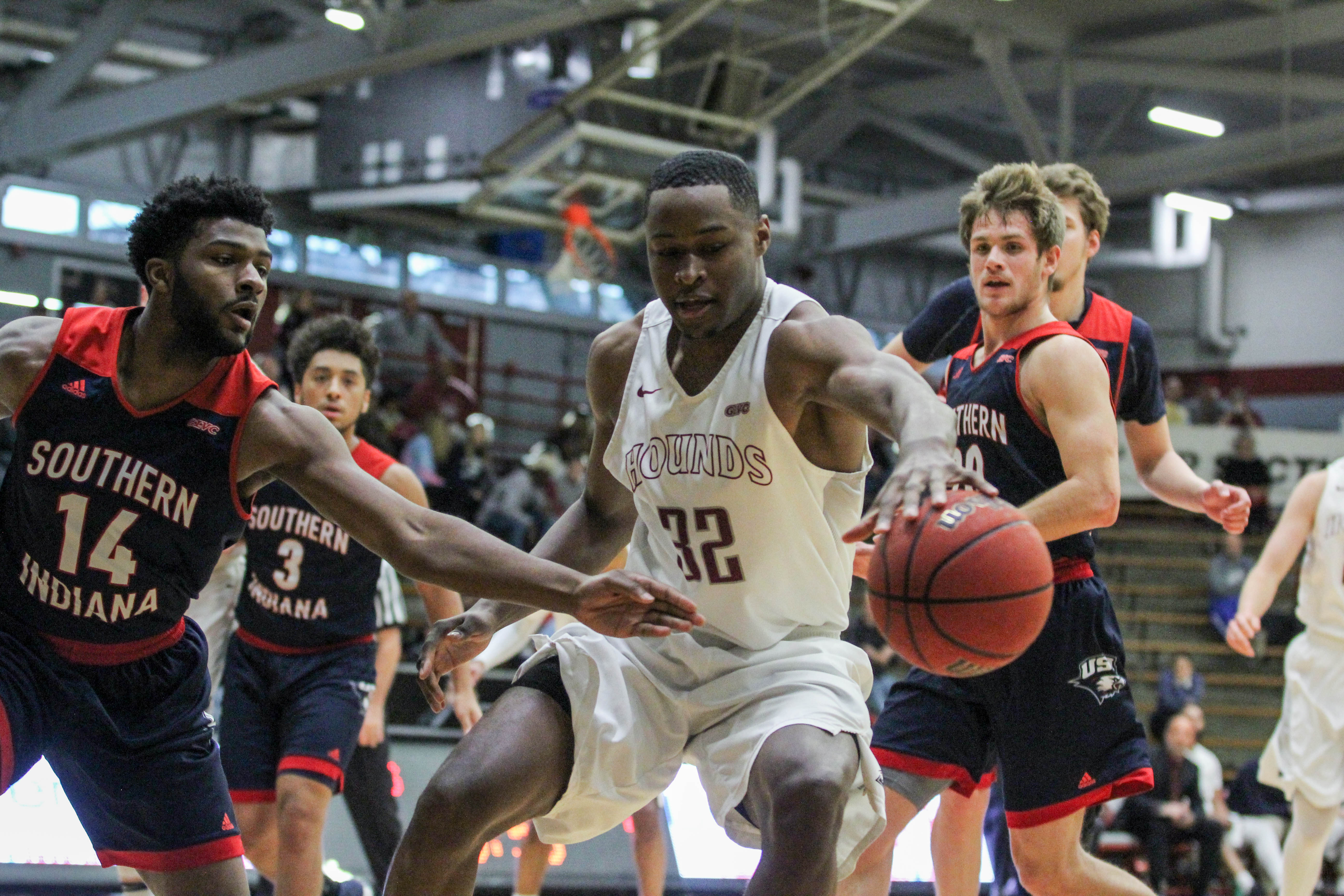 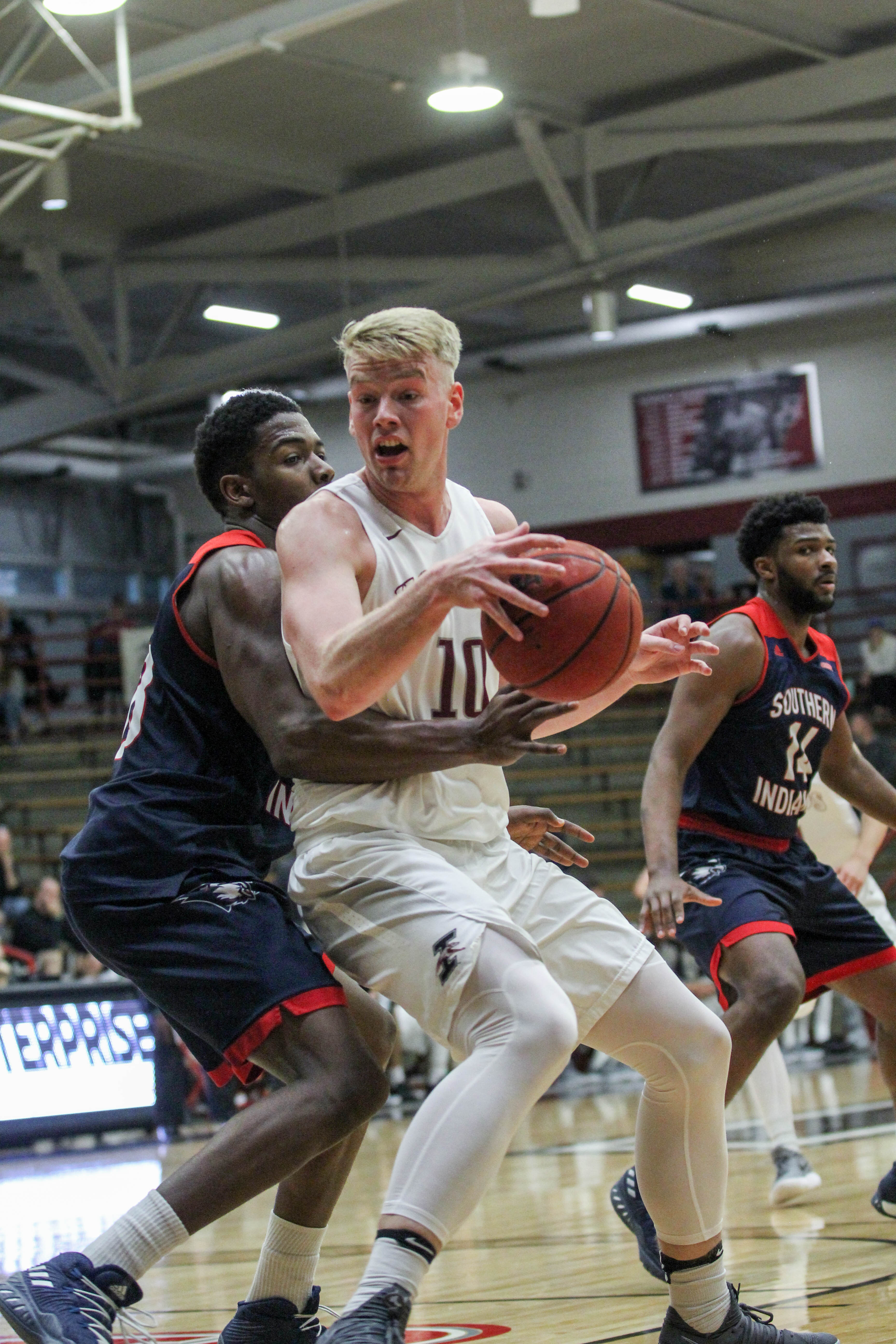 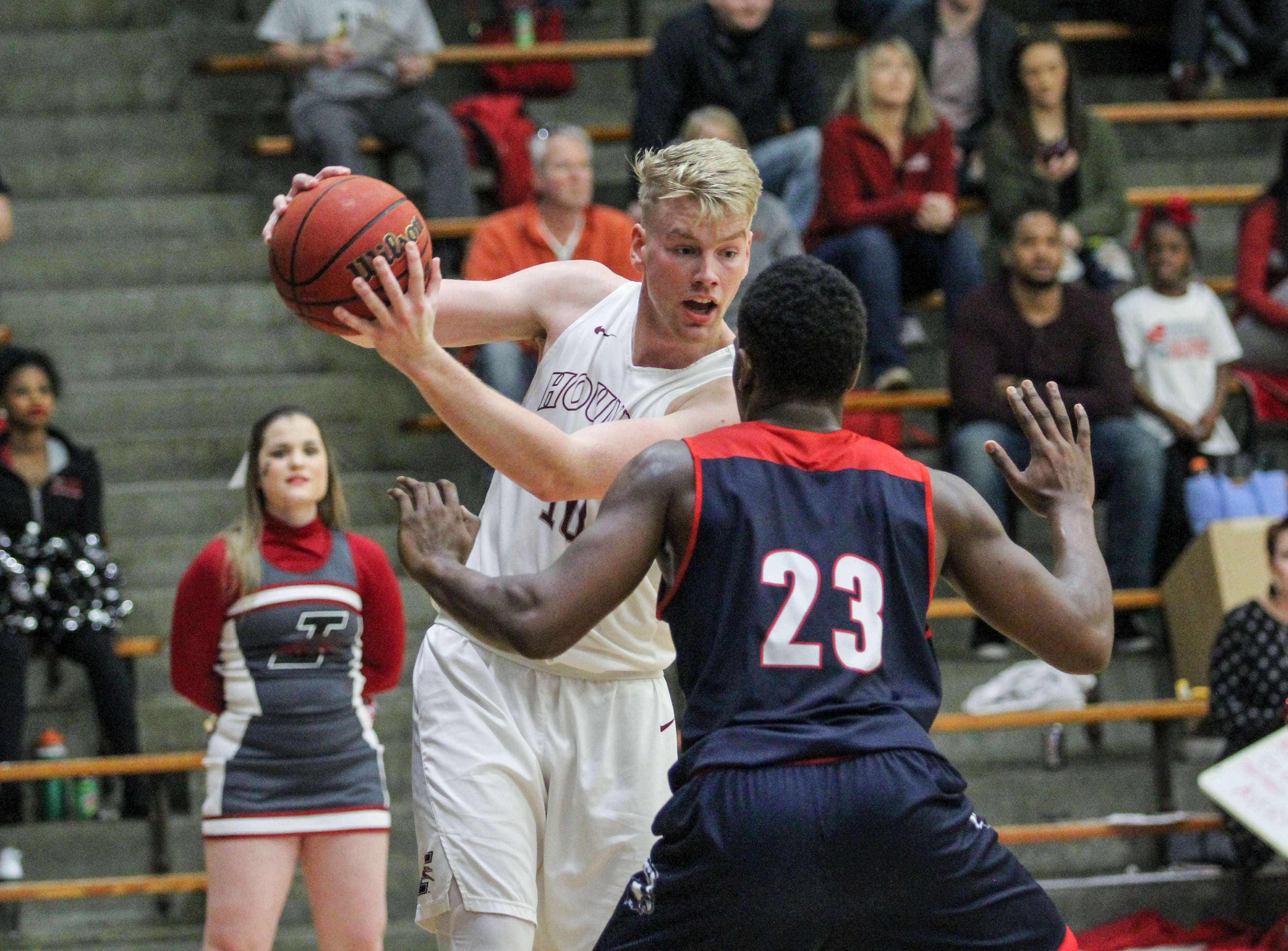 Following a season-opening loss, the University of Indianapolis men’s basketball team recovered with a five game winning streak. The streak, however, has gone in reverse over the past three games.

The Hounds were defeated by the Division I Indiana State Sycamores in an exhibition game on Dec. 9 in Terre Haute, Ind., 79-75. Being an exhibition, however, the loss did not effect the Hounds’ conference record.

Senior guard Eric Davidson led the Hounds’ scoring for the night with 18 points and four assists. Freshman forward Trevor Lakes finished with 14 points on four of seven shooting from three-point range. Sophomore forward Tate Hall racked up 12 points and three assists in the loss. It marked Hall’s eighth game straight scoring in double-digits, after not scoring any points in the season opener.

“It feels great [scoring in double-digits consistently],” Hall said. “I think the first game of the season I was kind of tight. You obviously want to play well, and I think I was focused more on playing well than just playing.”

Head Men’s Basketball Coach Stan Gouard commended Hall on his play this season coming off of the bench.

“Tate [Hall] is a very good basketball player that we are fortunate to have,” Gouard said. “ It’s hard for a young man who started for us a lot last year with individual accolades to say, ‘Hey, we’re going to bring you off the bench.’ Tate gets a lot of credit for accepting that role.”

Prior to the exhibition loss, the Hounds were defeated by the Lewis University Flyers in overtime, 88-75.

Although only making five of nine free throws, senior forward Devin Dixon recorded 16 points for the night with an efficient six for six shooting performance.  Davidson also scored 16 points while sinking four of eight three-pointers. Junior Forward Jesse Kempson finished with 12 points, but struggled from the line, making only one of four free throws. Hall recorded 11 points on four of six shooting.

According to Gouard, Lewis was not a team that the Hounds took lightly going into the game.

“Lewis is a well-oiled machine,” Gouard said. “They are very smart on the offensive end, despite their two and six record. I told our guys yesterday, ‘Lewis is the best two and six team in the country.’ They run offensive very efficiently and they force teams out of their comfort zone for the most part.”

The Hounds’ five-game winning streak came to a halt on Dec. 2 at the hands of the Southern Indiana University Screaming Eagles, 73-67.

Hall led the Hounds in scoring against the Screaming Eagles with 18 points and two assists. Kempson ended the game with 17 points and four of the Hounds’ five blocks, along with two steals. Lakes also finished with 11 points on the night, making three of his six three-point attempts.

Overall, however, the Hounds struggled with three-point shooting against Southern Indiana, making only 13 of 45 shots from downtown. The Hounds also had difficulties with converting free throws and making it to the line, sinking only five of eight shots. Hall said the team needs to improve its transition offense in order to continue to win games throughout the season.

“We’re known as a team that gets out and runs, but we didn’t do that [against Southern Indiana],” Hall said. “We have to implement that into our games going forward. In our losses this year we’ve kind of beat ourselves… We’ve just got to minimize the mistakes, and if we do that we will be successful.”

Gouard said that the key to the Hounds’ success was getting the players in ideal scoring spots.

“I feel like against Southern Indiana the other day a lot of the shots we took weren’t high percentage,” Gouard said. “Our guys who normally make shots struggled offensively. We’ve got to get guys into a position on the floor where they are comfortable scoring the basketball.”

Davidson said that the team has been steadily improving both on offense and defense throughout the short time in the season.

“I think our defense is getting better as the season has gone along,” Davidson said. “We’re also getting more consistency on offense… Sharing the ball better, setting screens for each other and having more flow on the offensive end.”

The Hounds’ will face the Bluefield State Big Blues in Nicoson Hall on Dec. 14 at 8 p.m.