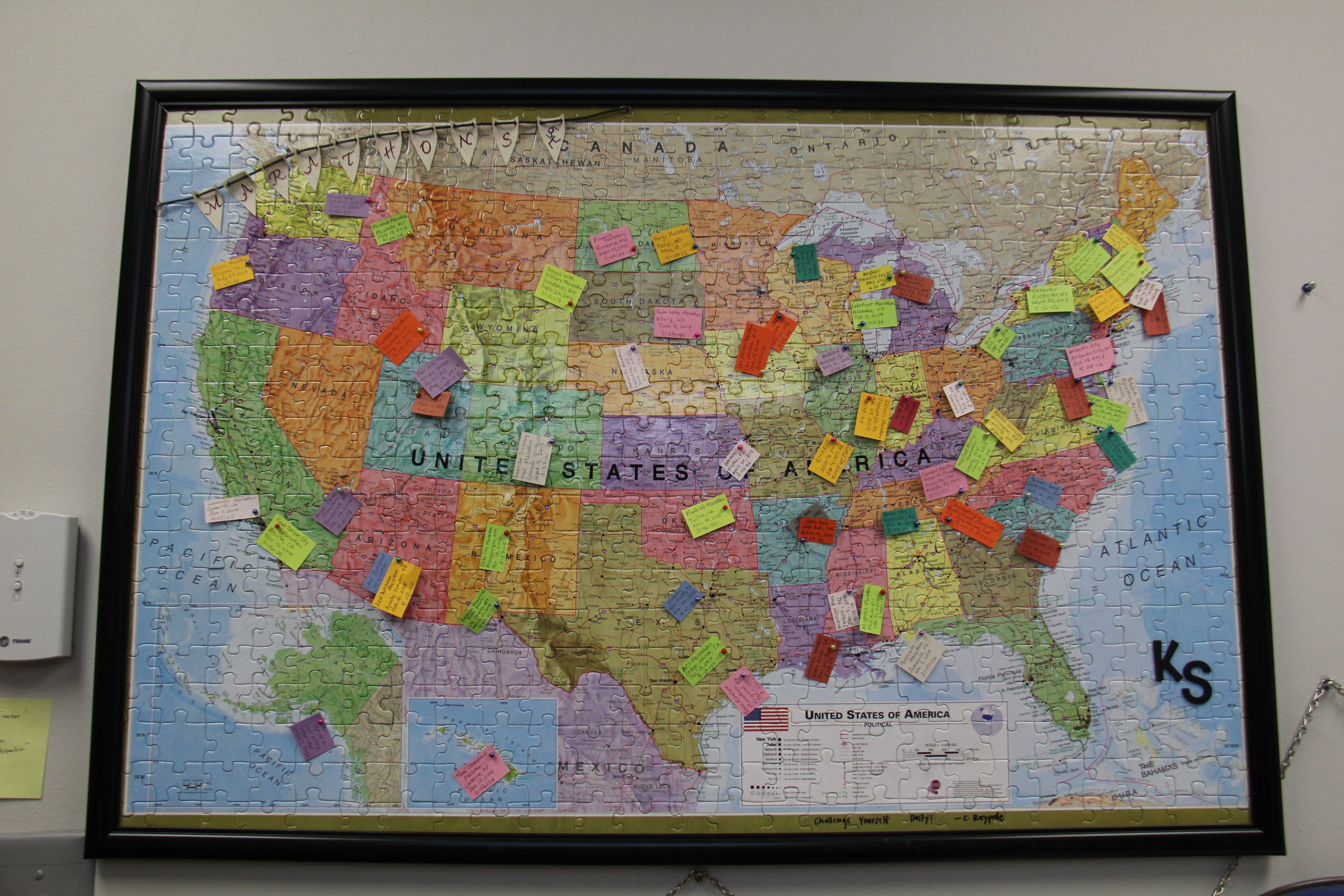 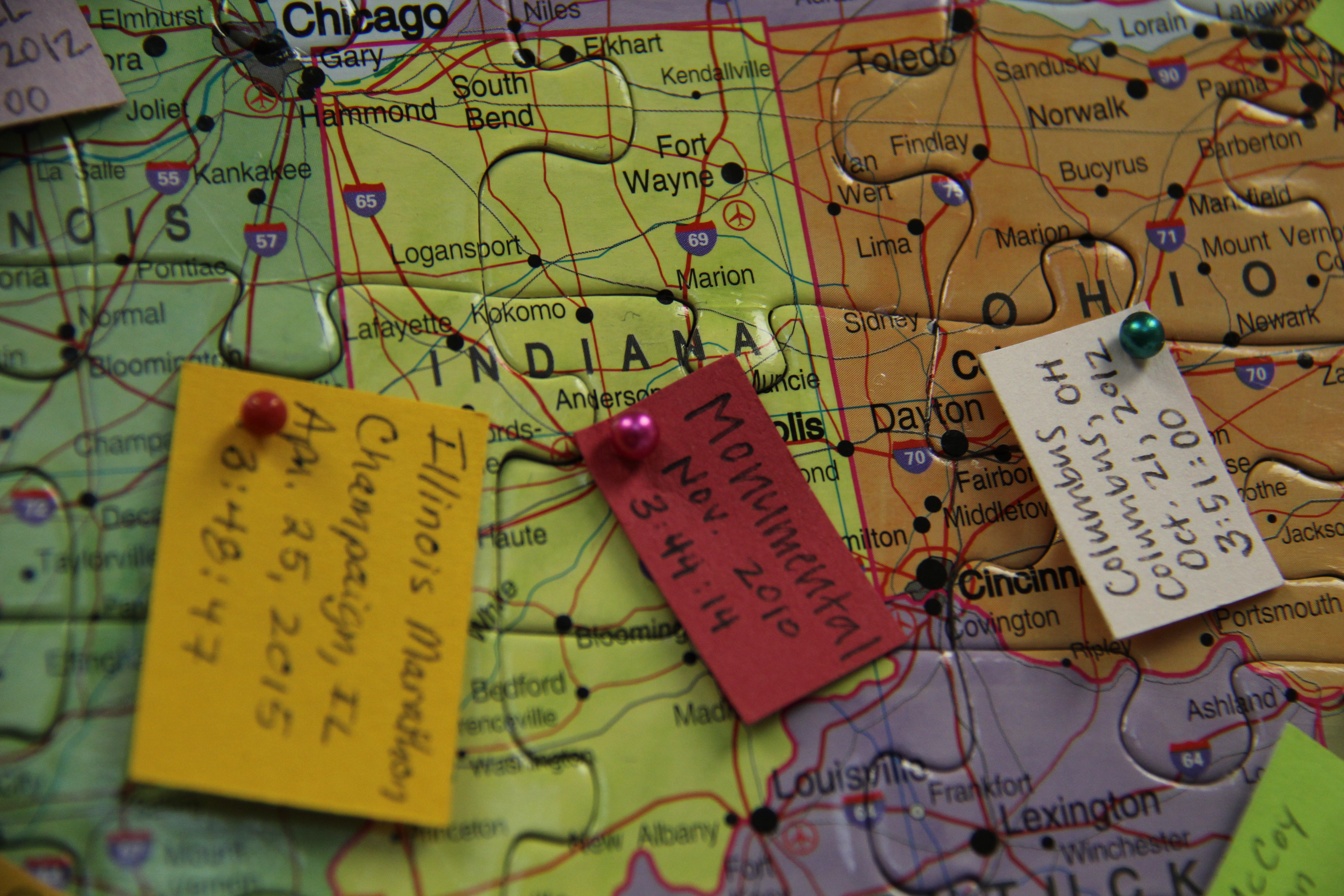 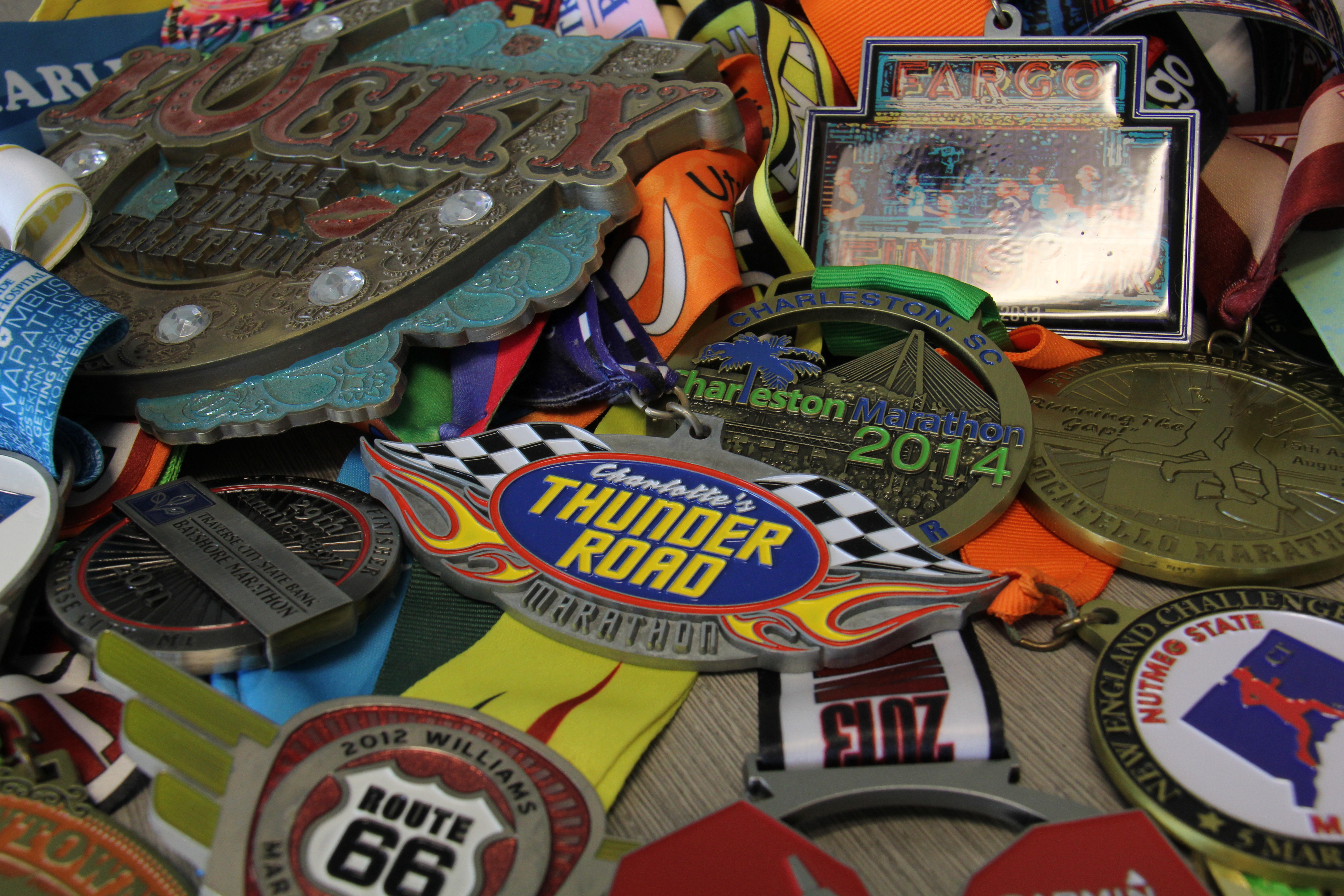 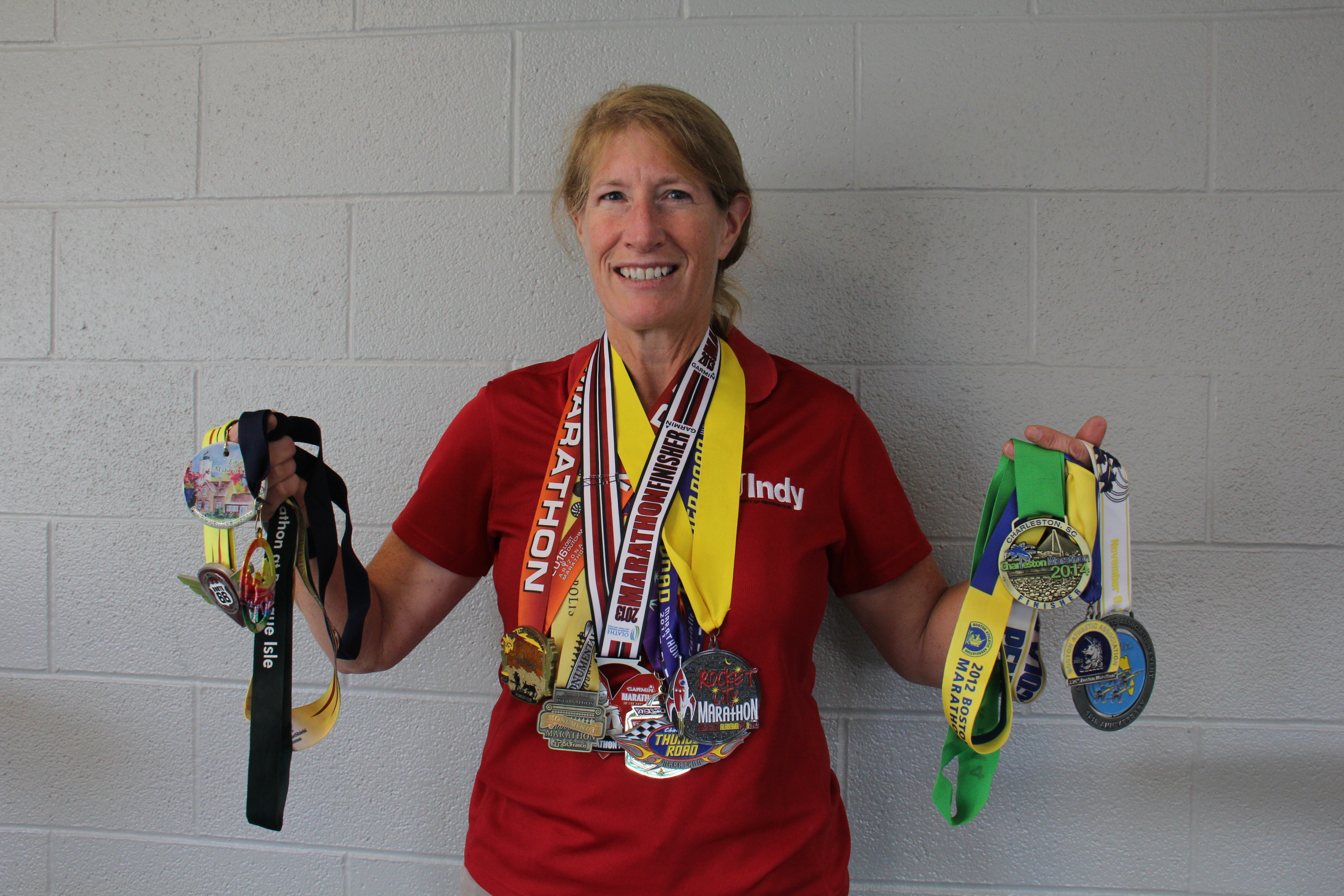 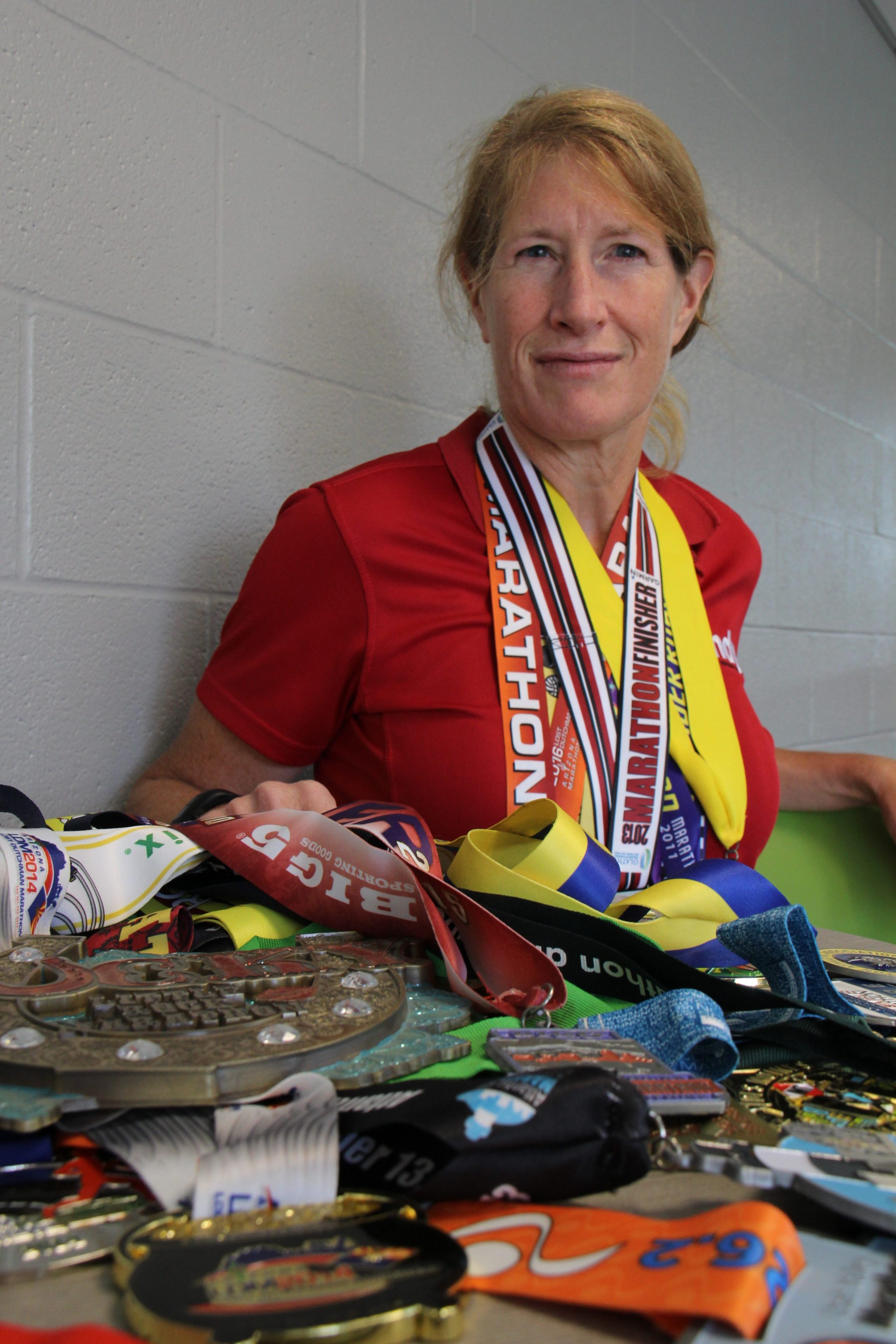 Running a marathon is a challenge that  not many people choose to take on every year. An even more ambitious challenge is to run one in each of the 50 states in the U.S. University of Indianapolis Associate Professor of Chemistry, Kathy Stickney challenged herself to do exactly that. Last year, she completed her goal in the LOCO marathon in Newmarket, New Hamp.

Six years ago, Stickney was a competitive horse rider in Indianapolis. During the winter, her available time to spend practicing was reduced, so she began running to keep fit for riding horses. When she started losing weight as a result of maintaining a constant running routine, she was hooked and became a habitual runner.

As her daily runs became more serious, Stickney joined a program operated by Indianapolis distance runner Tom Hathaway, called “Couch to 5K.” Hathaway was a member of the “50 states marathon club” and encouraged Stickney  to challenge herself with tougher goals.

“He encouraged me so much,” she said. “He made me realize that I didn’t have any limits, I could do whatever I wanted to.”

Hathaway died in 2012, that was when Stickney challenged herself to run a marathon in all 50 states in his memory.

Her experience as a marathon runner began when she completed her goal time for a half-marathon and Hathaway challenged her to raise the stakes and run a full marathon.

In November of 2010, following weeks of training, Stickney ran her first marathon,  the Monumental Marathon in Indianapolis, and completed it in a Boston Marathon-qualifying time.

The Thunder Road marathon,  centered around the NASCAR Hall of Fame in Charlotte, is the fastest marathon she has ever run with a time of 3:36. This was the third marathon Stickney completed.

Without the help of sponsors, Stickney stuck to her goal and paid for all of the traveling and registration expenses to run in each state herself. It took slightly less than six years to complete all 50 marathons, an average of about 10 marathons a year.

After achieving her initial goal, Stickney needed a new one. From all the marathons she ran during her journey, she finished 12 of them in over four hours. Her new goal became to go back to those states, re-run the marathons and finish in under four hours.

To prepare, Stickney is focusing on her everyday running routine. Her weekly training schedule includes daily runs of 3-7 miles and a long run of 12 miles or farther during the weekend. During the week, Stickney runs on UIndy’s indoor track in the early morning and frequently enjoys watching some of her student-athletes in their own practices. Running for several miles a day also allows for time to meditate, and Stickney takes advantage of this time to think about how to better her classes.

Stickney’s advice for amateur runners is to listen to the body, do not ramp up the mileage too quickly, look into any aches and pains before they become serious injuries, get a good pair of shoes and don’t lose focus on goals.

“It is the feeling of accomplishment that makes it worthwhile,” she said. “You just have to stick to it. You are going to hurt and be tired. You are going to try to put it off because you have to study or have to do other chores. But if it is a priority, you should run first in the morning and not last in the day.”

Stickney is president of the planning committee for the Hound Hustle 5K. Amateurs as well as experienced runners will have the opportunity to run along a scenic route of UIndy’s campus and the University Heights neighborhood on Sept. 30.