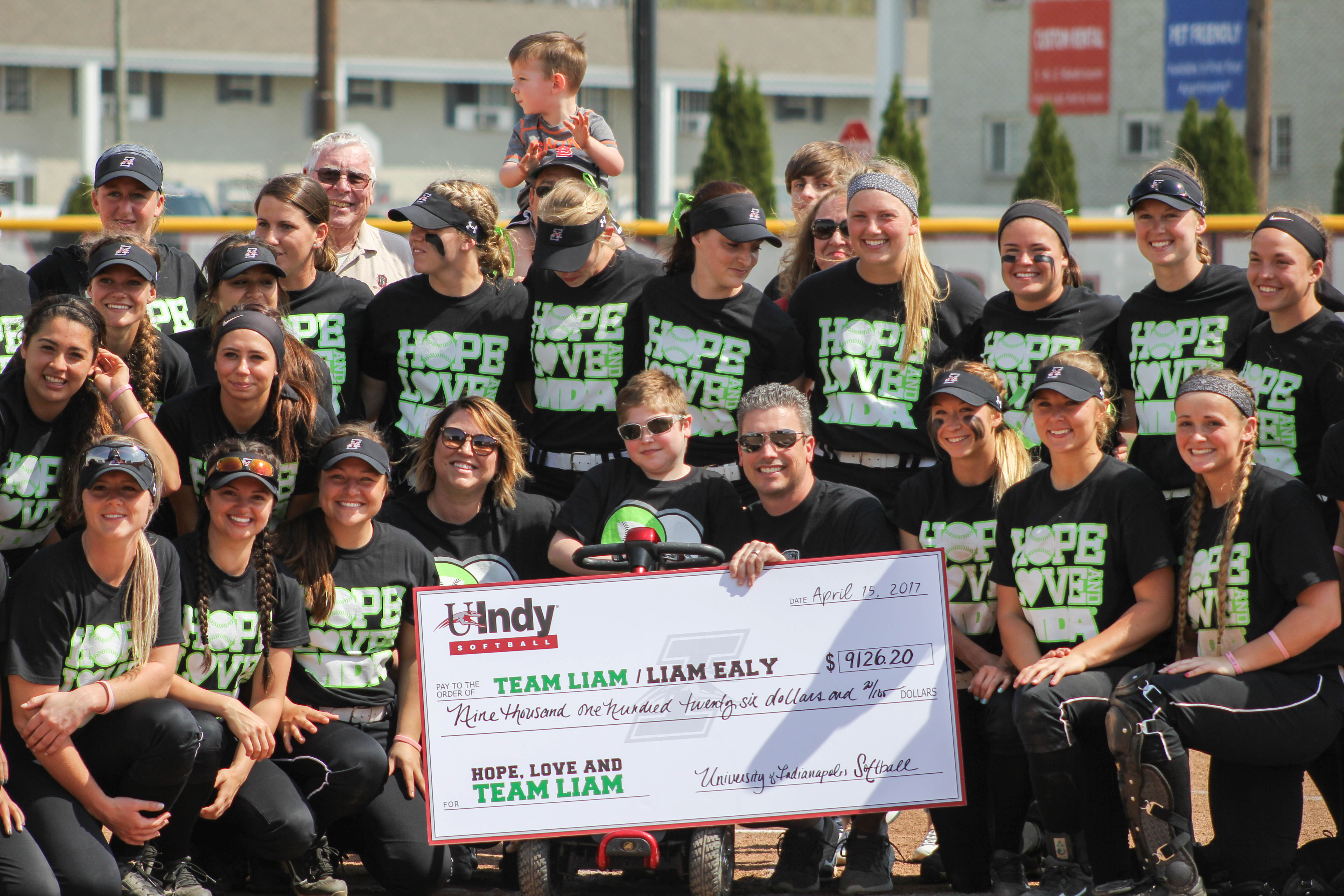 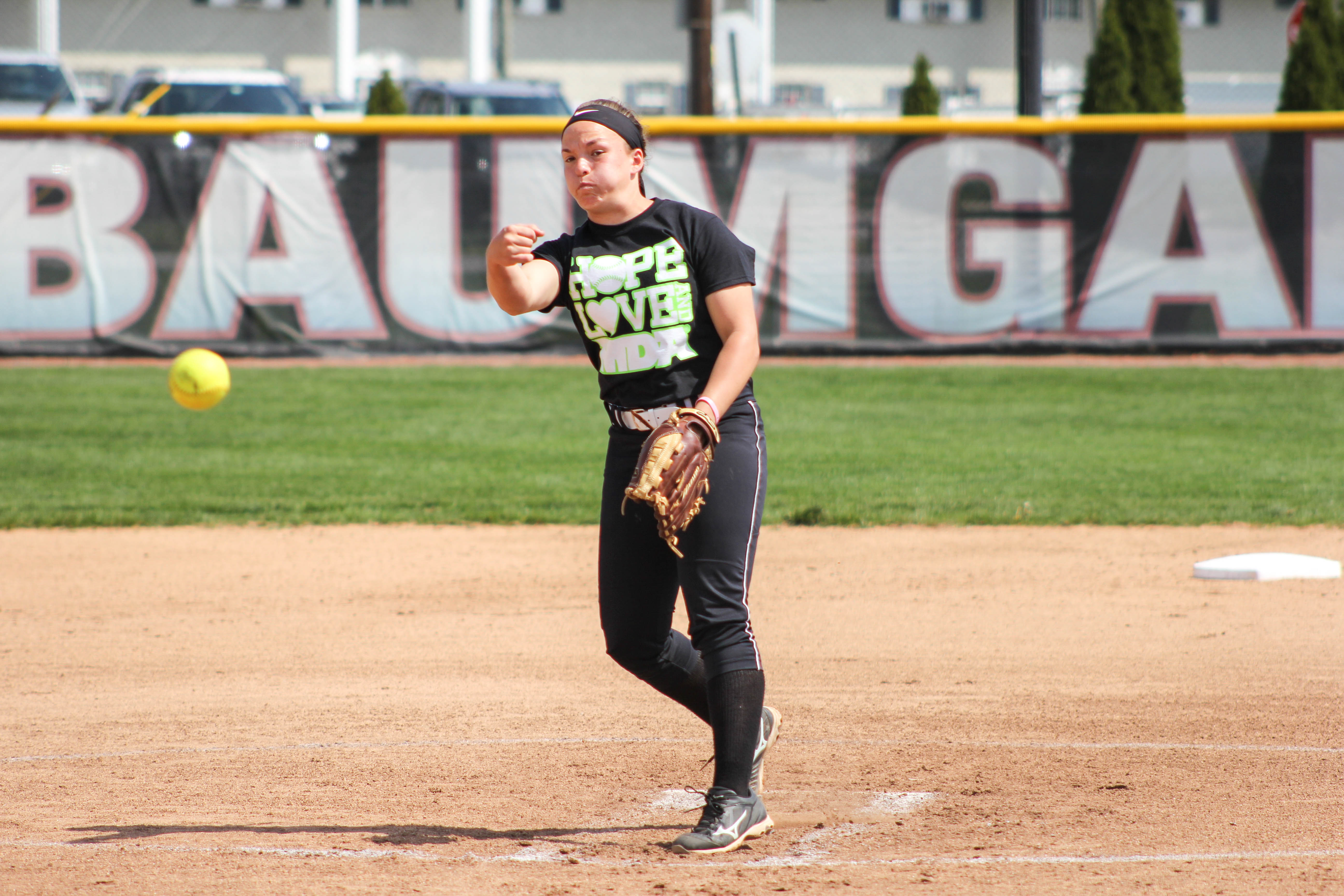 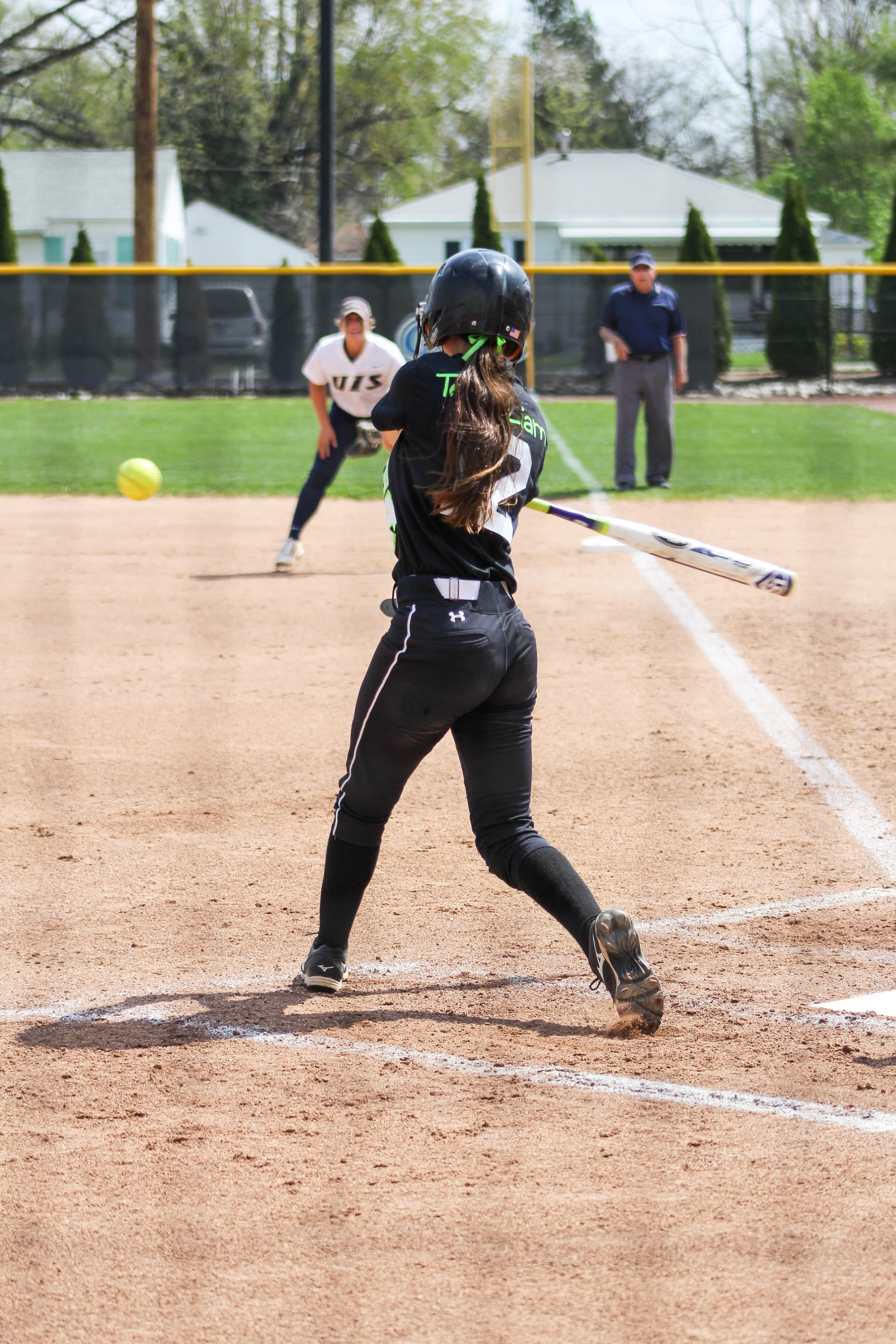 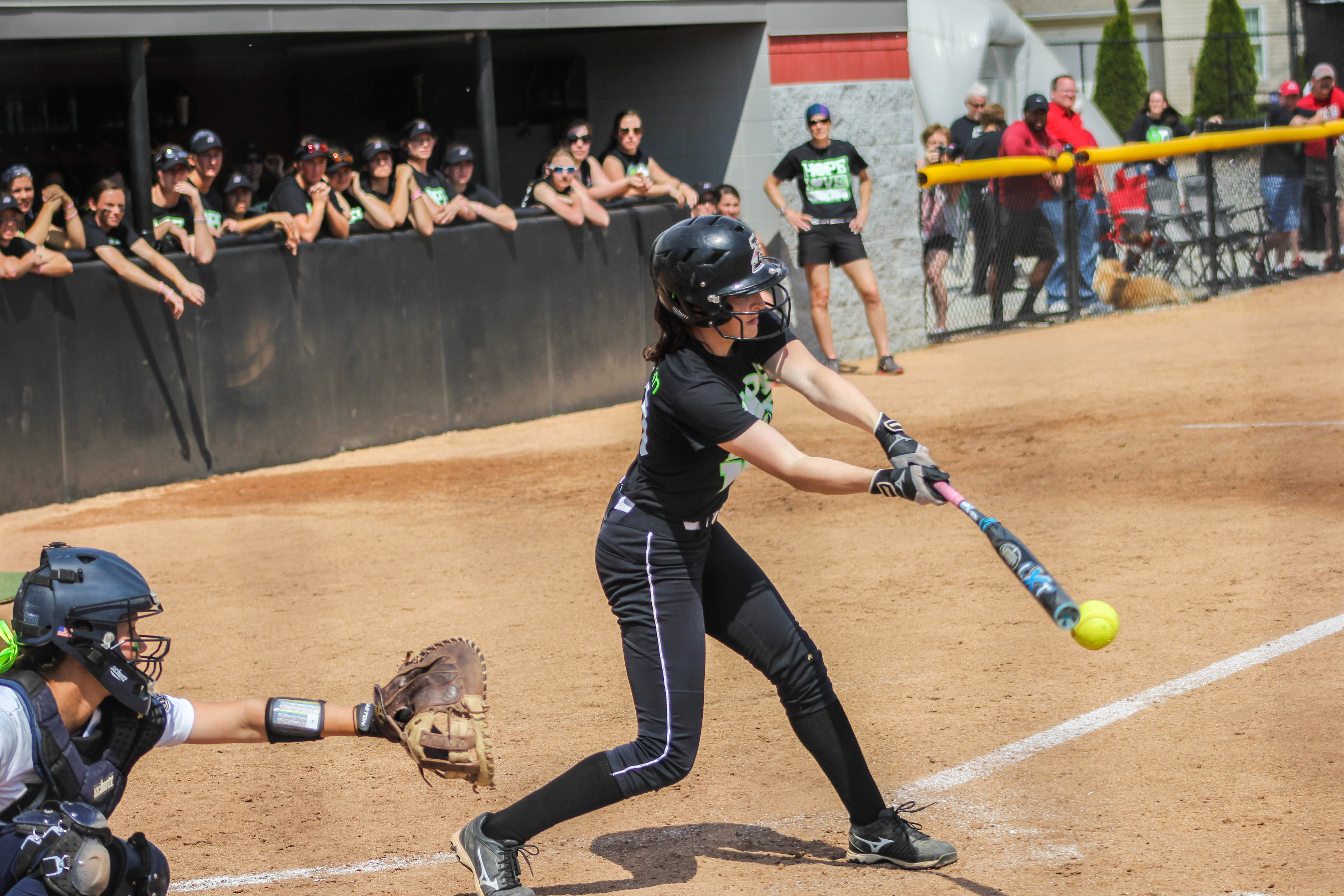 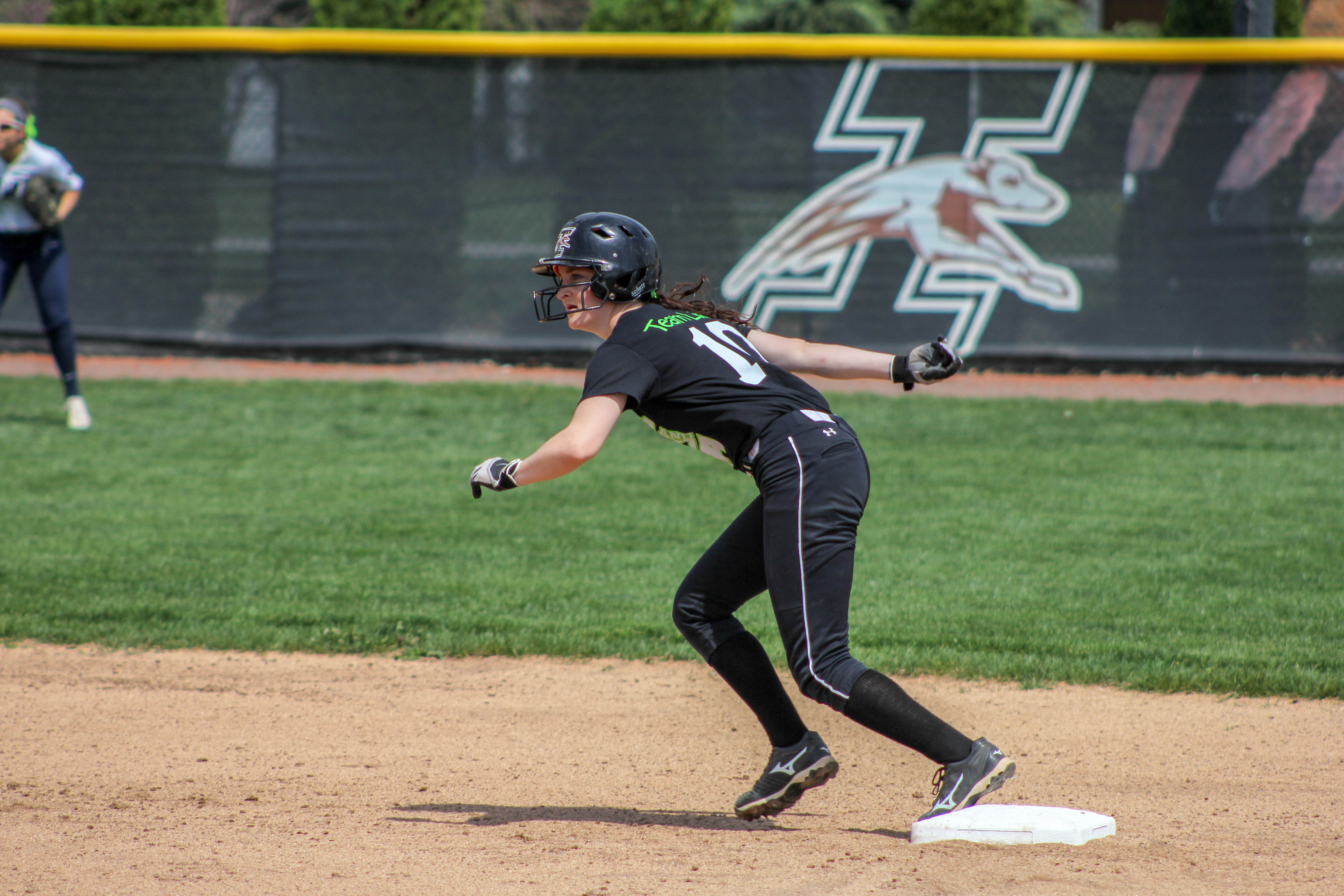 Head Softball Coach Melissa Frost prepared to say goodbye to four seniors at the University of Indianapolis softball team’s Senior Day on April 23 against Maryville University. She said it is a bittersweet feeling to watch the women play this game.

“You watch these ladies go through your program, and they are reaching a milestone of it being their last game and last time to play, but also they are graduating,” Frost said. “It’s something that you always hate to see because you want to keep them forever if you can, but we are also so excited for them to get out to the real world. And they are always going to be a part of UIndy softball, and that’s the awesome thing about it.”

The women went 1-1 in the doubleheader, taking the first game 1-0 and losing the second 3-0. The lone score in the first game came in the second inning, when freshman infielder/outfielder Cathy Skaggs got on base with a triple, and freshman pitcher Lauren Honkomp batted her in with an RBI to shortstop. Honkomp also pitched all seven innings and recorded five strikeouts. Maryville picked up the next game with three runs, all in the fourth inning courtesy of four doubles. Maryville pitched a three hitter, with hits from junior Jessie Noone, Skaggs and Honkomp.

Prior to the games against Maryville, the Greyhounds faced off against the University of Illinois-Springfield on April 15, losing both games.

In the first game, senior outfield Dani Turner scored the lone UIndy run in the second inning, when the teams were once tied. Honkomp allowed seven runs in a little more than three innings, with UIS scoring three runs in the third, three runs in the fourth and finally five runs in the fifth to secure a 12-1 win over the Hounds. The Prairie Stars’ performance represented the highest run total by a UIndy opponent this season.

The second game did not stray too far from the first game’s results, with senior utility Natalie Lalich’s double bringing in Noone in the third inning for another single Greyhound run for the game. The score remained 3-1 until the Prairie Stars snagged five runs in the sixth and seventh innings to secure an 8-1 victory.

The team has lost five of its last six games, something Frost said she understands is uncharacteristic of the program.

“This is clearly uncharted territory for us to be on this little skid that we have had happen, but I also think that we can find some positive out of it,” Frost said. “We can get the kinks ironed out now. So once we get ourselves in the postseason – and we’re going to have to really work to get into the conference tournament and work to get into the regional tournament – but I feel like this could be a blessing in disguise. It’s one of those things where we kind of fell apart here in the middle, but we can regroup and be our best when we need to be.”

Although the team suffered two large losses, it was able to end the day with a larger victory on its MDA day by presenting a $9,126.20 check for the Muscular Dystrophy Association. The check was presented on behalf of “Team Liam,” which honors Liam Ealy, the nephew of Greyhound softball alum Megan (Hall) Slightom. The check was given to the Ealy family by the entire softball program, and Ealy threw out the first pitch for the day. The check was the largest amount the team has donated in the years it has participated in year-long fundraising for MDA, beating last year’s total by more than $1,000. Frost said she was thankful for all of those who contributed to MDA and was impressed with the work the team did in finding donors and the MDA shirts.

“It’s something that has grown bigger each year. It’s just awesome to give back to this family, and it’s such a big thing for MDA,” Frost said. “Clearly, it’s very near and dear to our heart. Anytime you see Liam come out and think about the struggles he’s facing, it certainly puts things in perspective for us. And I think that’s a huge reminder of how fortunate we are to be college athletes and a reminder of the actual day-to-day struggles that we don’t have that unfortunately he faces.”

Lalich said that it has been a joy to see Liam come out for the game every year she has participated.

“He has fun, and his whole family has fun. When we sell the shirts and raise money, the students help make it so easy. Anyway we ask is like, ‘Yeah, we would be more than happy to.’ I think everyone loves helping out with it. How couldn’t you?”

The team heads to Illinois to take on the Quincy University Hawks in a doubleheader on Saturday, April 29. The first game is set to begin at 1 p.m.

US bombings a concern